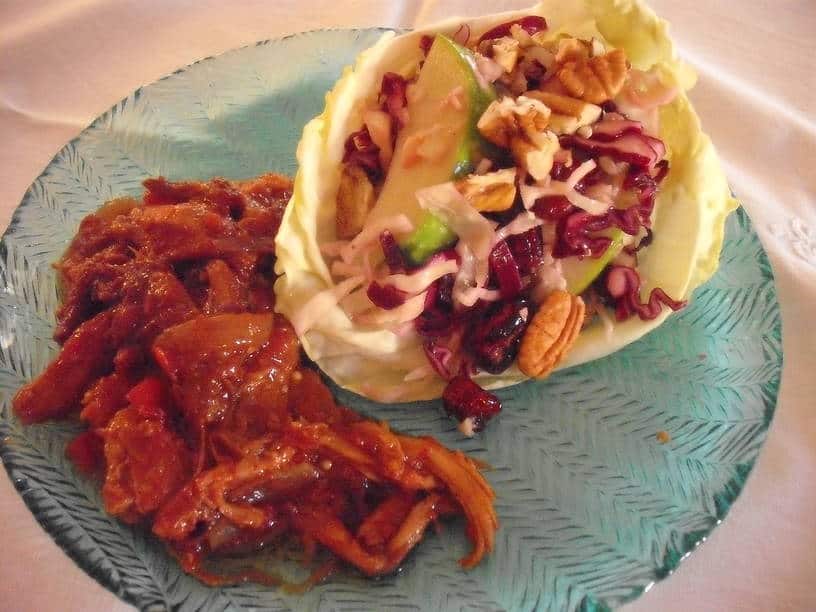 To be sure, I could not write about life at Papa’s Pasture without including a couple classic pork-centered recipes. I felt one of them had to be pulled pork, a dish that is high in popularity right now. Besides, it gave me a chance to share a sweet and tangy, vegan green apple slaw that’s a perfect side or topper to this pulled pork and a nice option for the vegetarians (like me) at the table. The pulled pork dish was not super sweet itself; it had more of a rich tomato flavor that was reminiscent of sloppy joes, according to one guest.

Roasting the pork shoulder could not be simpler; however, I went a little wild creating the sauce because… well… the sauce for pulled pork is super important, right? So while there is no “simple” version of my sauce, there are a couple of shortcuts I can share along the way… so be brave! 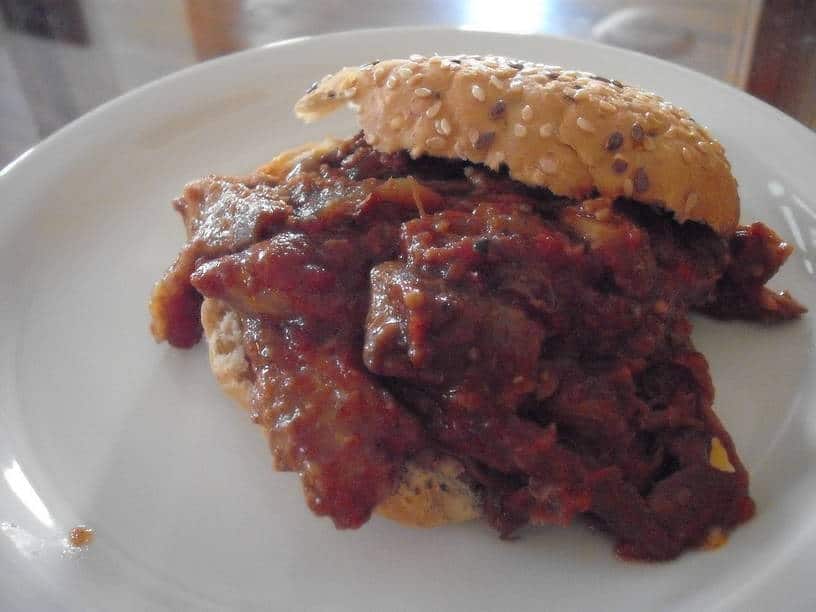 For the Roast Pork
For the Sauce

This BBQ is excellent with the sweet green apple slaw, which Don used as a topping for his sandwich. Reheats well.

About the addition of a hot minced pepper…

It’s no secret Don and I like our life on the spicy side. For this sauce, we chose a new pepper we’ve been working with over the summer—a Black Congo, which is rated around 15 or 16 on the Scoville scale. To give you an idea of what that means, a Carolina Reaper is number one for heat–meaning it is currently the hottest pepper  on Earth–and a jalapeno is probably somewhere around a 50. So a Black Congo is nothing wimpy, but not super hot. It is very fruity, and that’s why we chose it here. You decide what pepper works for you, but if go with a Reaper, Trinidad or Ghost, I’d cut the amount to less than a teaspoon. Really.

About that hickory-smoked chocolate…

Our friend Gary is one of the most creative and brave cooks I know. For the weekly CSA get-together, he’s made savory basil cheesecake for dessert and served it with dry red wine–one of my all-time favorite Wednesday night dishes. And he is into smoking many foods, including dark chocolate. He chooses a large chunk of good-quality chocolate that’s at least 80 percent cacao and places it in the back of his smoker, as far away from the heat as possible. After a few hours, it’s transformed. It’s the not-so-secret ingredient in my Bacon Candy, too, except there the chocolate is smoked with cherry and orange woods for a much milder, sweeter aftertaste. Find a friend with a smoker and you can have a chock-o-lot of fun!

I really can’t express the trust i have in Blaine Bilyeu, owner of Papa’s Pasture. Having been out to her farm and gotten to know her as both a local vendor and as a friend, I can recommend her pork products without any hesitation–and remember, this is a vegetarian you’re talking to here. If you believe in purchasing only the best quality, humanely raised meat, you can order Blaine’s pork online with a couple of options for pickup or find her at the Goshen Community Market in Edwardsville, which has added a once-a-month winter market beginning November 18. Blaine and I will see you there!