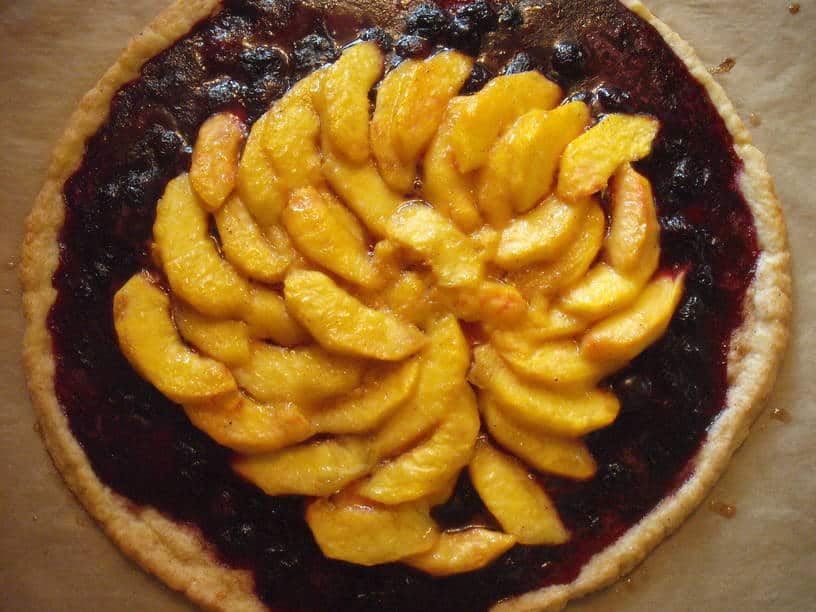 Remember when “fruit pizzas” were really popular—I think my daughter was in grade school then. You bought the Slice and Bake Sugar Cookie Dough from the little Pillsbury Dough Boy and rolled the whole log into a big round pizza crust, baked it and then iced it with cream cheese and decorated it with the fresh fruit of your choice—grapes, kiwi, lemon-juice preserved banana slices and berries. Nice, but not great by my culinary standards today.

And I’ve learned that the Italians were way ahead of the game with a lovely confection called a crostata that is made with the same sort of ingredients but is way…WAY better. Yes, a bit more work, but not too much more. The result is amazing and impressive—far more impressive than the actual skill needed to pull it off.

So before all that summer fruit fades, try this crostata for your next get-together. Note that I made the blueberry filling a day ahead, and I encourage you to do the same. Giving it a night in the frig resulted in better thickening. Further, you’ll have enough filling for about three crostata or a crostata and a small pie, which I also managed to pull off. One last filling note—the technique for the filling is from the Culinary Institute of America and the combination of cornstarch and tapioca flour is my friend Jane’s (of Pop’s Pie fame) recommendation. Taken together, I made the best fruit filling I’ve ever made—and, let’s face it, I’ve made my share of all sorts of fruit fillings. Onward to that pastry board!

Note that the prep time doesn’t include the overnight chill but does account for chilling the dough about 30 minutes. You could, however, make the dough several days in advance, too, and then bring it back to just above room temperature to roll.

Just a suggestion that vanilla ice cream is a great addition here. You don't need it, but why not!

Some thoughts on local peaches…

It is no secret that the Midwest is known for its peaches. Ripe, juicy, perfumed and sugary sweet, peaches are, perhaps, the quintessential summer fruit in my neck of the woods. Unfortunately, most of the peaches in my area come from large commercial orchards that are on a regular spray schedule. If you are familiar (and, of course, you should be) with the Environmental Working Group’s Dirty Dozen list, you know that peaches are right there—in fact, peaches rank number seven on their list this year of dirtiest conventional produce. They’ve been on the list somewhere for as long as I can remember. So we buy organic, right?

Well, easier said than done, especially if you are trying to buy local. There are very few organic orchards in my region. Drift from conventional fields is a major factor. So we give up peaches, right?

Not so fast! Let’s not be hasty. Here is a perfect example of why it pays to know your grower. Though not in great abundance, you can usually find small farms at your local farmers market or on nearby country roads that have a few fruit trees on their property. While you may never find USDA Certified peaches, you will find people you can trust who either don’t spray at all (so you will need to share some with the worms) or spray as little and as carefully as possible. We can have our crostata and eat it too, but we need to be mindful and make friends with our farmer neighbors and probably be willing to pay a bit more for our safe, healthy, local peaches. I say it’s a bargain. We may not have Blueberry & Peach Crostata every night, but, really, we shouldn’t anyway. Right?

If you are interested in which summer produce is safe and which should only be consumed if organic, you can request the Environmental Working Group’s Shopper’s Guides or get their mobile app. And while you’re at it, consider giving them a small donation to help them continue their critical work that keeps us all so much safer in the kitchen. Because sometimes bravery just isn’t enough, ya know?