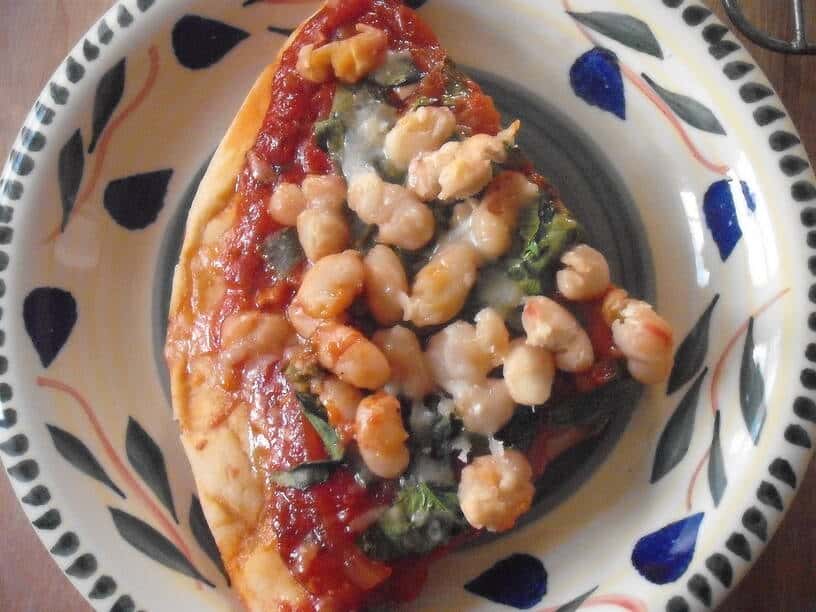 Recipes are more than just directions on food preparation; at least that’s my take on the rich and beautiful history of global eating. Recipes can tell us a lot about community and ecosystem connections, politics and history, the struggles and successes of races and cultures, even the intersectionality of cultures, religions, racism and power. Take the conversation between my friend Jane and me early this year….

Jane texted that she was on to a new pie, which is not surprising since Jane is the proprietor of Pop’s Pies and has been featured numerous times on this blog for her amazing confections. But it’s pretty special to come up with a “new” pie. I mean, what hasn’t been done and redone (sometimes to death) in the world of good ol’ American pies?

And, in reality, Jane’s new pie wasn’t new; in fact, it got its start sometime in the late 1960s. According to Jane’s source, TASTE Cooking, this custard pie made with, of all things, white navy beans is “a culinary icon of the controversial Nation of Islam and of revolutionary black power.”

As Jane and I discovered, the story of “The Radical Pie that Fueled a Nation” is amazing and—not surprisingly—undertold in White history. The story of the Bean Pie is a wonderful exploration into how Black culture chose to separate itself from the predominantly White culture and why. Here is a snippet of the story in TASTE:

“The bean pie came to prominence through the Nation of Islam, a black nationalist and social reform movement founded in 1930. Based on beliefs that included black supremacy and self-reliance, the Nation represented a profound shift from the collaborative social-reform strategies of groups like Dr. Martin Luther King Jr.’s Southern Christian Leadership Conference and the Student Nonviolent Coordinating Committee…. [The Nation] advocated for a new black identity free from the legacies of enslavement… [and a] follower’s diet, methodical and inflexible, was one of the pillars that supported this new identity. The Nation’s leaders argued that many dishes and ingredients traditional to black foodways, particularly soul food, were relics of the ‘slave diet’ and had no part in the lives of contemporary African-Americans.”

In 1967, Nation of Islam leader Elijah Muhammad published How to Eat to Live, a cookbook emphasizing “vegetarianism, consuming whole grains and vegetables, and limiting sugar, processed grains, and traditional soul food ingredients, like sweet potatoes, corn, collard greens, and pork—the latter of which was vehemently forbidden to Nation members in accordance with Muslim law. Alcohol and tobacco were also prohibited. In their stead, black chefs cooked with ingredients like brown rice, smoked turkey, tahini, and tofu….”

The navy bean that is featured in this custard pie was one of the stars of the Nation’s diet. TASTE reports that according to Elijah Muhammad, “Allah (God) says that the little navy bean will make you live, just eat them…. He said that a diet of navy beans would give us a life span of one hundred and forty years. Yet we cannot live [half] that length of time eating everything that the Christian table has set for us.” Quite the endorsement for such a humble little bean, Jane and I thought.

I think vegetarians today would recognize the wise thinking behind the Nation of Islam diet, and, with some lifestyle exceptions, be right on board. So Jane was all up for trying out this pie—perhaps putting it on her order menu for Black History Month. And I was all in for being a taste tester—I even volunteered Don and decided I’d keep the ingredients to myself just until he tasted it. 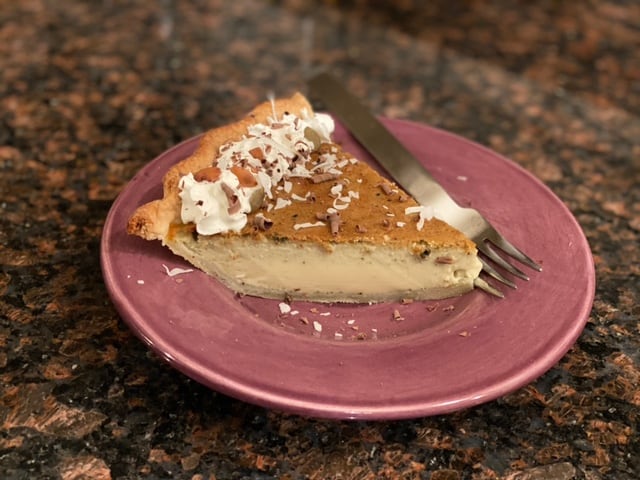 Once that pie was out of the oven and I’d picked up our slices, it was ready, set, go! Then we were back in conversation with the verdict. And the verdict was…well…let’s be honest…not great. Jane thought with some tweaking, she might elevate it for her customers, but, really, there was no getting past the texture of those beans and the bland taste left in the mouth. As for Don, he came back into the kitchen and looked at me in disbelief: “Jane made this pie?” So, while the story is incredible, the history totally relevant to present day conversations, the honoring of Black History Month through the learning of the whole story important, and the pie really pretty easy to make, the result… needs more work. Perhaps just the victim of a modern—maybe White—pallet.

But wait! Let’s not throw those humble, protein-packed, yummy beans out with the pie crust. Let’s pause a minute and rethink…a pizza is a pie, right? Sauce with cheese is sorta like custard, right? OK, I’m reaching a bit here. But I bet you will be reaching for my White Bean, Spinach and Tomato Deep Dish Pizza with Whole Wheat Crust the next time you are feeling the need for vegetarian power in your life! Take a look… 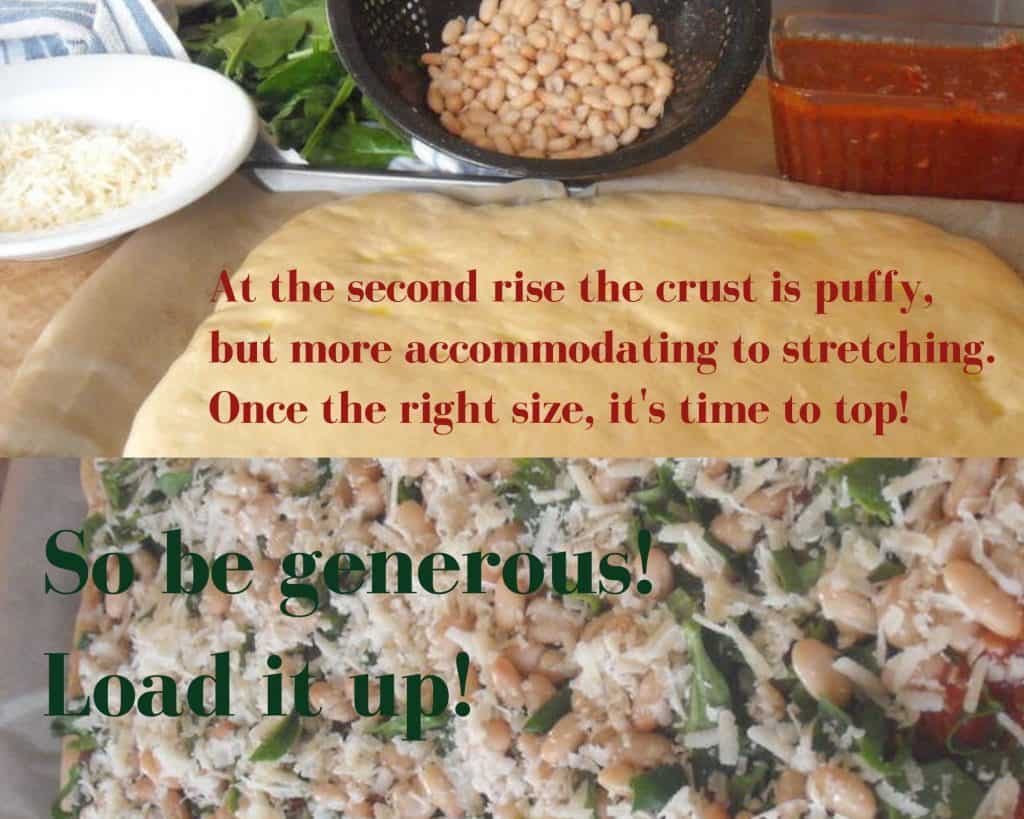 About the Crust: this crust is not your typical chewy, crunchy crust. It is soft and bready, with a fairly light, crispy bottom. This makes any leftovers work really well when reheating. The crust will get slightly crunchier but never hard. I recommend reheating at 350 degrees for about 15 minutes. Leftovers for this pizza are good for at least five days—good luck making them last that long.

About the Sauce: while this sauce is just incredible on pizza, it is equally at home over pasta, in a casserole, and as an Italian dipping sauce for homemade focaccia. There will be more than enough sauce for this pizza and then some, and it stores for about a week in a tightly sealed container in the refrigerator. You’ll think of a million ways to use it—very nice to have on hand.

Cooking Navy Beans from Scratch: while it is easier and quicker to open a can, I usually go for from-scratch beans. If this is your choice too, you will want to soak about one cup of dry beans overnight. Drain them in the morning, rinse well and cover them with fresh cold water to cook. I like to add a couple bay leaves and two cloves of raw garlic to the water, as well. This delicately flavors the beans. Do not salt them, which will make them tough. Once the beans are tender–maybe an hour and a half to two hours at a low simmer, you can drain them and use them the same day or you can store them in their liquid for about four days, using as you need. Be sure to let them dry out before using on this pizza.

So we have barely touched on the connection between food and history, history and truth-telling, Black struggles within White supremacy. So we must keep cooking, and learning, and reading, and having those hard conversations, which are slightly easier to have over a nice piece of pizza or slice of pie. The more seats we pull up to the table, the more diverse our menu becomes and the healthier our communities will grow.