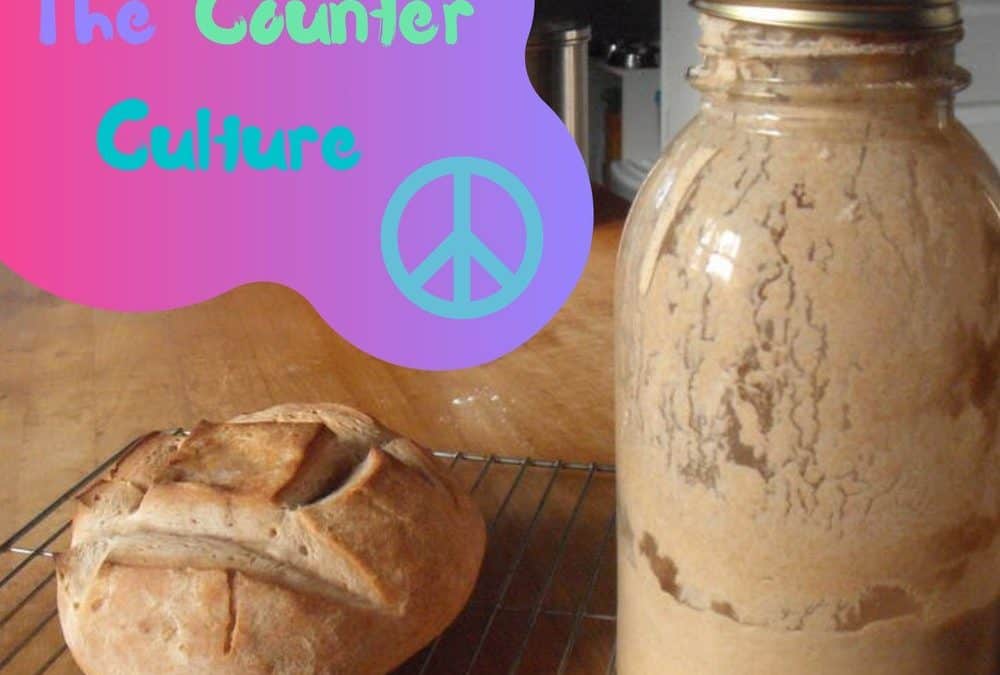 As you read this today, Earth Day turns 50 years old. I’m sitting here drinking hemp-laced matcha tea, compliments of my favorite farmer Bruce Haas. And lately—in fact for most of the past month—I’ve been reconnecting with Earth in as many ways as I can—reading Edward Alby, Jane Goodall and Aldo Leopold, practicing yoga, singing with Leonard Cohen and Bob Dylan and Joan Biaz on the radio, meditating (or trying hard), dancing barefoot on warm days in the yard on the grass, taking long walks at twilight, talking to trees—all that 60s counter culture stuff I just never outgrew.

And speaking of counter culture, I’d like you to meet a new special friend: Here’s Maya, or rather Maya Two. That’s her in the jar next to the bread. She’s a bit messy today, but we’ve been busy. Maya is a gift from my friend Jane Zappia—yep Pop’s Pies Jane Zappia. Jane called at the end of March and said: “Would you like some sourdough starter? I have more than I need.” OMG. Can you say Soooooo Hippie! Of course I would!

When she dropped it by, she instructed me to watch a video featuring master baker Patrick Ryan—his master class on making sourdough starter and baking bread. I did…in fact I’m pretty sure I watched it at least 15 times! He’s just so dang cute, so easy to understand, so perfected in his craft, so encouraging, so….ok, 15 times.

And you know where we are headed here, so be sure you watch Chef Ryan before you get into this post. I strongly suggest at least 15 times. It won’t be hard. Be brave! And check out The Fire House Bakery he runs with his wife Laura in County Wicklow and his Bread School in County Cork. Yes, a little side trip to Ireland is a wonderful way to get down to Earth.

So what’s with the name Maya? Jane named the starter after one of our favorite authors, Maya Angelou: And Still I Rise. Of course. Right? I have been feeding Maya sprouted whole wheat organic flour and filtered water weekly ever since she arrived. I store her in the frig because I’m baking sourdough about once a week, so the frig slows her down a bit—sort of like my milk kefir. But about 24 hours before I bake, she comes out of the frig and into my dark warm pantry to get all bubbly and yeasty and sweet-tangy smelling. Then, next day I just pull out what I need, feed her again and pop her back in the frig. To me this ancient process feels grounded, in tune with cycles of seasons, the workings of the Earth and its marvelous system of sustainable life. “Home” is a good word to describe baking sourdough bread for me.

In this post, I  will recount for you the steps you need to make a sourdough starter and a loaf of bread (Chef Ryan shows you how to double this recipe.), pointing out my go-to ingredients and where to get them as we progress through the recipe, but do not skip Chef Ryan and his master class video. He does everything so much better than I can. I’m just a newbie here! I will say that, for me, the most challenging part in all this was converting the grams to typical American equivalents—you know, cups and ounces and teaspoons. If you have a scale that measures in grams, this won’t be a problem for you. But in case you don’t, I think I can help—it’s sort of been trial and error because…

As Chef Ryan keeps repeating, the one golden rule to baking sourdough is that there are no golden rules…no one-size-fits-all guidelines for perfect sourdough because, of course, everyone’s kitchen is different; everyone kneads bread differently with different levels of strength; the humidity and temperature are different nearly every day (in the Midwest for sure). You just have to learn to talk with your bread. As Chef Ryan says: “The bread will tell you when it’s ready.” So watch the video, read this post, make your starter, and bake!

The prep time here refers to the approximate time it takes to knead the dough and let it rise twice, unless you choose the overnight rise. The cook time is baking time.

Yep, takes a while, which is why I often start my bread in the afternoon and get it to its second rise about 6  p.m. Then I let place it overnight in the refrigerator, so that when I rise in the morning, it has too and we are both ready to roll. Preheat the oven, put the kettle on and mark my bread. Hot bread first thing in the morning. Ok so heaven, right? 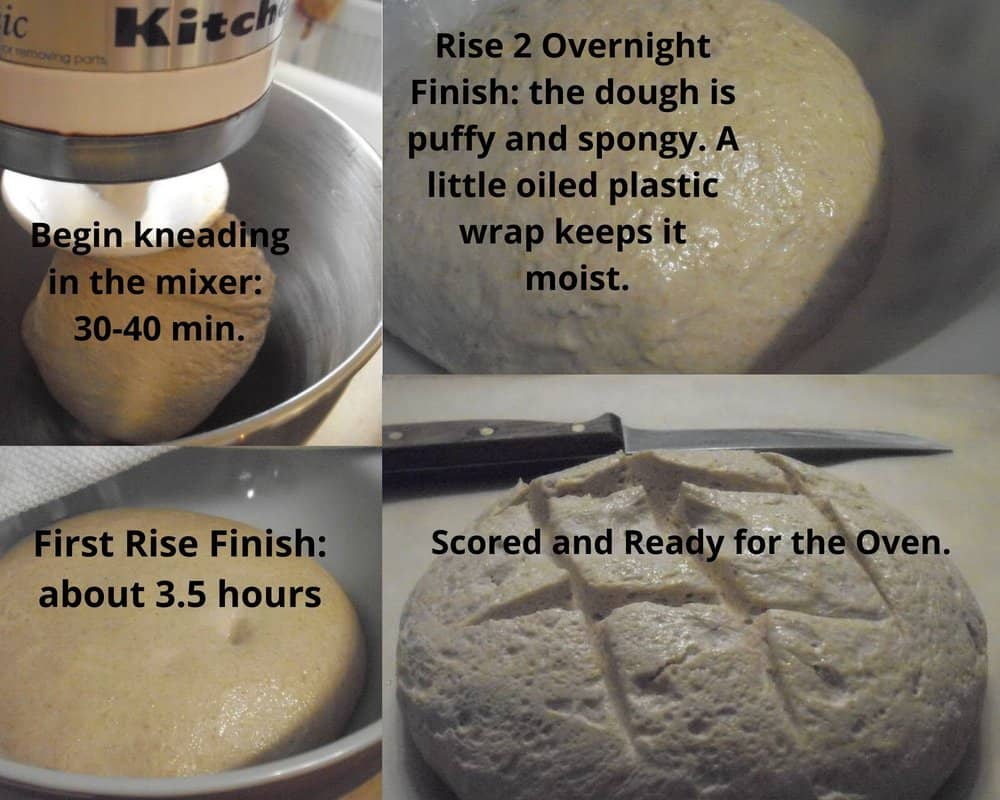 See, I know this sounds like a big deal, a lot of work, some trial and error. Not gonna lie, that’s how it felt to me. But now I’m in the rhythm—Sunday nights are bread nights, well sometimes Monday nights—whatever works. And it feels good, so natural and connected to the Earth. I bet it can be that way for you, too. Be brave…

“If we surrendered to the Earth’s intelligence we could rise up rooted, like trees.”
Rainer Maria Rilke