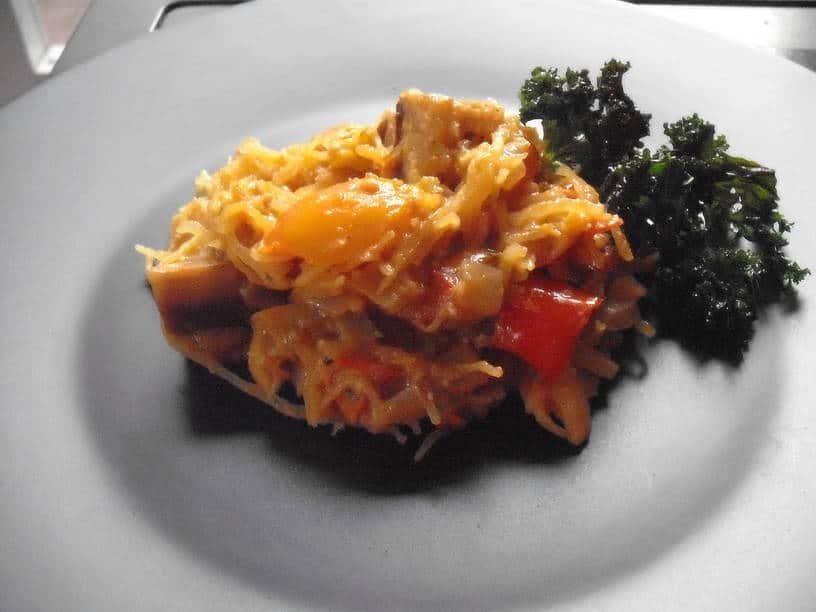 The versatility of squash is just amazing to me. And believe me, I’ve pushed versatility to the limits—remember Rosi Biver’s Not-Quite-Apple Cobbler made with zucchini? Well the dish I created for this post is not such a stretch, actually, but it is rich, satisfying and doesn’t contain one bit of wheat pasta. 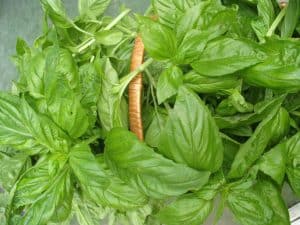 It began with my basil crop, which—if I do say so myself—was impressive this year. I’ve harvested it twice now, and there is a third cutting coming on. So, of course, I made pesto, putting away two ice cube trays full in my freezer for winter stews and sauces. But I reserved a big jar for the frig because it can add all kinds of flavor and depth to just about any dish—scrambled eggs, fresh tomato soup, classic caprese salad, and so on. And it got me thinking about how much better dishes are when layers of flavor are heaped one on top of another—it’s one of my most favorite ways to cook.

So a note about some special ingredients and preparations before we get down to business, just because I think you might be tempted to cut some corners when you shouldn’t. Be brave:

The “spaghetti” in this dish is squash, not surprisingly, and you will want to prepare your spaghetti squash ahead of time—by as much as a day—and chill it down so that it retains a nice pasta-like texture. Adding it to the skillet mixture while it is still warm from the oven will only make it mushy.

You will need a leftover rind from a good wedge of Parmigiano-Reggiano (Remember how I always tell you to never throw these away and keep them stored in the freezer? Well if you forgot, you can use pesto that contains Parmigiano, which it usually does if it is commercial. My fresh pesto does not contain cheese, which I add fresh according to whatever dish I’m making.)

You want to take the extra time to grill your eggplant ahead of time so that it gets soft, charred and slightly caramelized. Adding it into your skillet raw will change everything… and not for the better. I just made it way ahead of time to get it out of the way; however, you can prepare the eggplant on the grill as you are cooking the main dish and add it in warm to your skillet with no worries. So work this out to suit your schedule.

You want to toast your walnuts before grinding them because they will have a richer, nuttier flavor if you do. And you do want to pulse them into a fine “flour” because they are going to become your thickener. I just throw walnut halves and pieces into a dry cast iron skillet and toast them around on a medium flame until I start to smell them and see them turn a slightly darker brown. Be aware they do burn easily—so don’t leave them unattended.

Serving Size: about 1 and a half cups

You can serve this right from the skillet or you can put it away in the frig in a covered casserole dish and reheat later. Since this dish makes a ton, dividing it to make a meal now and a meal later is a great way to extend it for an easy weeknight meal. Just reheat in a 300-degree oven until bubbly. Extra cheese on top never hurt a thing, in my opinion. 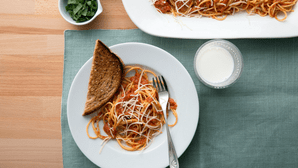 In honor of back-to-school season, I thought we should address the littlest diners at the table. When my daughter was a little girl, I used pasta sauce to sneak in all sorts of vegetables I was afraid she wouldn’t be open to trying right off the bat–like broccoli, cauliflower, etc. So, if you can pass my new spaghetti squash dish off as pasta…Yeah! The wee ones will get several servings of healthy veggies in this dish. However, if they are on to you, I’ve got another idea. Actually, it’s not my idea; it comes from the cooking experts at Delicious Living Magazine.

According to recipe developer Amy Palanjian, this Spaghetti with Roasted Red Pepper Sauce is a real kid pleaser! The yummy marinara gets a nutrition boost with roasted red peppers and hemp seeds. And what kid doesn’t love spaghetti, really? You can take Amy’s lead and serve it with a commercial gluten-free pasta or with your family’s favorite noodle. Either way, the kids will get their veggies.