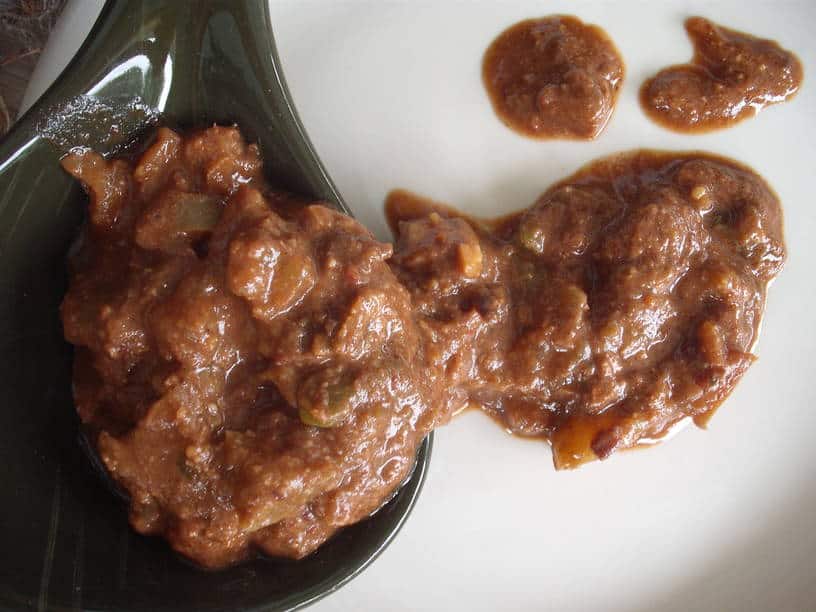 We eat a lot of Mexican-inspired foods in my house. And much of the inspiration comes from a few of my favorite celebrity chefs; chief among them Pati Jinich, star of the PBS show Pati’s Mexican Table. I have watched Chef Jinich for years now, and what I love best about her is her story. She didn’t start out as a culinary star; she was a political analyst, of all things, with a Masters from Georgetown! But her love for her homeland, its rich culture and its unique cuisine brought her back to what was truly her calling.

One of my favorite seasons of Pati’s Mexican Table was the one in which Chef Jinich takes us all on a guided tour of Oaxaca, Mexico, immersing us in the people, history, celebrations, family life and foods of this amazingly beautiful region. Someday I will get there, I hope. But until then, I will treasure my place at Pati’s TV table.

And it was this season-six excursion into the ways food had a huge role in a country’s history, cooking and celebrations that first gave me the idea of trying my hand at a mole. Mole, I learned, is like a family’s or region’s fingerprint. While commonalities among various standard types of mole exist, this is usually a recipe handed down from generation to generation, guarded and revered by everyone around the dinner table.

So I was a little unsure I could pull it off—I mean, most moles are all about meat, after all, with main ingredients like from-scratch chicken stock and fresh lard. Further, I’m not one bit Mexican, and I had a terrible fear of insulting a whole country and Chef Jinich with my amateur attempt. But what is the Green Gal motto? Yep: Be brave in the kitchen. And I think Chef Jinich would be right there with me on that. She is nothing if not brilliantly brave. So I dug in, researching and testing and finally coming up with a Green Gal mole that honors the farmers and the food of my region, with a significant nod south of the border, just as traditional Mexican moles honor the people of Oaxaca.

Warning: this is a long read. I divided my mole sauce preparation and the presentation of my chicken and pork moles into three days. Was it worth it? Well, even I—the vegetarian—tasted my finished sauce (lard and all!) and had to admit it was pretty darn good—balanced, rich and complex. Then my diners—one set for chicken mole and one set for pork mole—gave the final verdict: delicioso!

Any mole takes patience and time, regardless of whose recipe you use. It’s meant to be a true creation—a work of art, if you will. So pick a couple of days you can spend quality time in the kitchen and create your own masterpiece. Here’s my version…

Serving Size: as a side sauce, perhaps half a cup

Note that the prep time includes charring the peppers and toasting the spices and pumpkin seeds. Cook time refers to the time the sauce cooks in the skillet. See the instructions at the end of the post for making the chicken stock, which takes a half-day, and creating the two meat dishes: chicken mole and pork mole. I suggest storing your mole in two containers, holding about three cups each if you are planning on making my two dishes below.

So there you have my Green Gal version of mole. I know it is a lot of work, but it is worth it, I promise. And don’t stick to what I’ve done—be brave! Let your mole define you!

If you are looking for a good from-scratch chicken stock, try the following from the Culinary Institute of America. I’ve adjusted the quantities for home kitchen, but you will still end up with about a gallon of stock—enough for the mole sauce and both the meat dishes I prepared. What you don’t use, you can freeze or gift to your friends, Next time you’re in the mood for mole, you’ll already be that much ahead. Give it a go! You can also see my use of a Joy of Cooking chicken stock recipe from an earlier post for Chicken and Dumplings.

The hard parts of this Mexican extravaganza are now behind you! Making the following two dishes is a snap. So if you are celebrating, you can direct most of your attention to other matters. 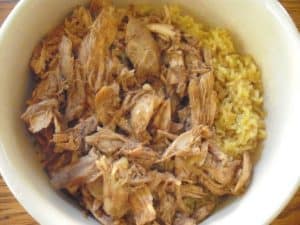 Place the deboned chicken, mole and stock in a large chef’s skillet or Dutch oven. Bring to full simmer; then, reduce to low heat and let the chicken get acquainted with the mole until dinner time. I would suggest at least an hour.

A little note of thanks here to Blaine Bilyeu, without whom neither the mole nor this dish would be possible. My snowy white lard and tender pork shoulder roast are from Papa’s Pasture—the ONLY place we buy our pork. Also, I used my slow cooker to finish off this dish. It created a wonder finish, but you could cook this just as I did the chicken in the recipe above by simply simmering it in a large skillet, if you wish. My suggestion, however, is the slow cooker, if you can.

And a final word from Delicious Living Magazine about chocolate, which is a must-use ingredient in every mole recipe I read about. DL offers you some sound advice on how chocolate is good for you and also not so good for you. The kind that is truly “healthy” has no fillers—like sugar, oils and dairy. It is at least 85 percent cacao and has been minimally processed. Just what you want for your mole, as well as your health.