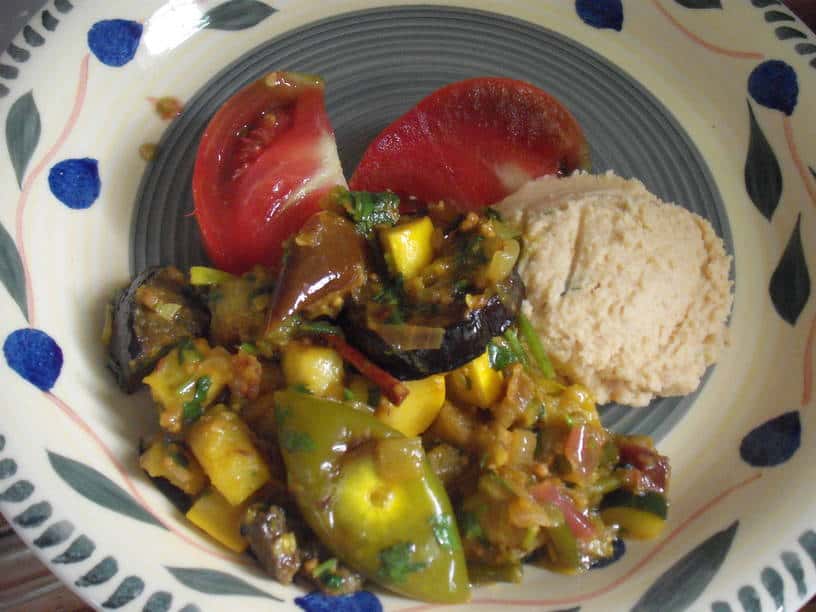 If you keep up with this blog, you’ve learned by now that I am the veggie lover and my husband Don is the meat lover. We do cross paths on occasion—I am a strong believer in quality bone broth as part of my healthy winter regime, and Don eats (for the most part and with only a small amount of continual reluctance) my vegetable concoctions. That said, neither of us is willing to adapt in any significant way to the other’s lifestyle. We agree to disagree.

So when I find a vegetable and ways to cook it that make Don clean his plate, it’s a repeater. Which is exactly what I hit upon with this new eggplant-inspired curry. And don’t you think the name is just too cute? Hubba Bubba—what’s not to love about that?

Here’s how this started: Don will actually ENJOY eggplant if it is fixed appropriately. He loves classic eggplant parmesan, and he can eat an entire bowl of babba ghanoush all by himself. Further, I fix a lot of hummus in the summer—perfect for picnics and porch parties, easy to dress up or down, cold and ready from the frig any time of day or evening. Why not put this twosome—such close cousins anyway—together in a flexible, local market-inspired dish that Don would love. And he did! Cleaned that plate!

This dish is a winner on several levels, I think. If you don’t find exactly my list of ingredients, no problem. There are lots of alternatives, which I will mention as we go along. In fact, you don’t even need the eggplant (think zucchini), but I suggest you try the eggplant, since the combo of eggplant and hummus really turned out spectacular. I borrowed a lot of ideas from traditional baba ghanoush—cilantro, olive oil, tons of onion and garlic, but really this becomes its own star—star of India, I guess. A bigger plus—nearly all the vegetables are locally grown in my area, making this a green living winner, too.

Here’s the thing: I’ve put in an extra step that might seem unnecessary (big surprise, right?). I encourage you to prep your eggplant and grill the eggplant and tomatillos as I have outlined in the recipe. Sure, you could just chop them up and add them to the skillet near the start of the dish, but it will not be the same. Leaching the eggplant of its bitter water and then grilling it creates a depth of flavor and slight caramelization you will never get from just throwing it into the skillet. Same goes for those tomatillos, which tend to taste sort of sour and raw. But if you salt, oil and grill them, they develop a more rounded flavor; they still have a piquant quality, but it’s balanced by this savory-sweet, back-of-the-pallet experience. Be brave and go the extra step.

One thing more: the hummus. There’s a great recipe for roasted beet hummus on this blog, but plain hummus—which is what you want here–is even easier to make, and I’ll share that recipe after the main attraction. But I see that look on your face: quality store-bought hummus is really good and so much less work. Okay, there are some good hummus brands out there, but none will be as good as from-scratch homemade, in my opinion. Plus, you will have a ton in the frig that will easily last over a week, if stored well. So economical and convenient! But there’s a way more important reason to be super skeptical when using store-bought hummus…pesticides. At the end of the post, I’ll fill you in on the Environmental Working Group’s newest fight against Monsanto over food safety. 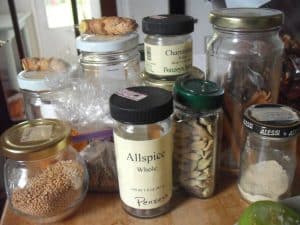 Okay last thing—promise! The spices used here are my favorites, but they may not be yours. You may not have all these in your kitchen, either. No worries! In India, each household has its own signature spice mix—a source of pride, a delicious unique fingerprint wafting out the windows of each woman’s kitchen. What wafts out of my kitchen windows does not necessarily smell or taste the same as what is wafting out of yours. Play around, experiment, be brave! And if you are having trouble finding what you need, my go-to is always Penzeys.

For now, let’s get cooking!

Preparing and Grilling Your Eggplant and Tomatillos
To Prepare the Curry

Here’s a quick look at how your veggies should look before and after grilling, just to give you a visual reference: 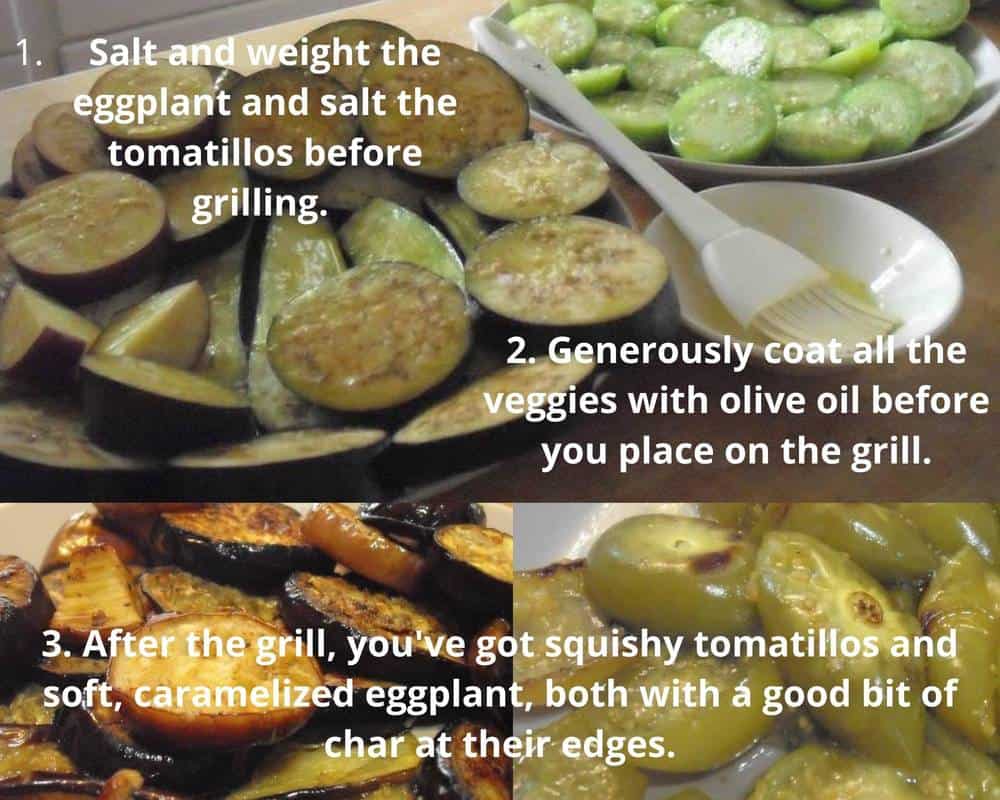 How to Make Your Own Hummus (and reasons why you should!)

Hummus is just a staple in our house—it is inexpensive, keeps well and makes a ton. It’s also a convenient way to add something special (that contains plant protein!) to all kinds of meals from Indian lentils to hearty breads to brunch eggs with roasted tomatoes (no kidding!). And here’s how you do it:

And that’s it. I’m not kidding—this is the best hummus you will ever eat. All organic and much safer, because….
According to a new report published by The Environmental Working Group (EWG), “The health-food staple hummus and the chickpeas it is made from can be contaminated with high levels of glyphosate, a weedkilling chemical linked to cancer.” This bad news came to light in recent independent laboratory tests commissioned by EWG. Unfortunately, their tests found glyphosate in other kinds of dry and canned beans, dry lentils and garbanzo flour, as well.

The EWG tested 43 conventional (non-organic) chickpea and chickpea-based samples and found that more than 90 percent had detectable levels of glyphosate. “Over one-third of the 33 conventional hummus samples exceeded EWG’s health-based benchmark for daily consumption, based on a 60-gram serving of hummus (about four tablespoons). One sample of hummus had nearly 15 times as much glyphosate as EWG’s benchmark, and one of two tests from a sample of conventional dry chickpeas exceeded even the Environmental Protection Agency’s too-permissive legal standard.”

But organic, I’m sad to say, isn’t a get-out-of-pesticide-jail-free card, either. EWG also tested 12 samples of organic hummus and six samples of organic chickpeas. Most contained glyphosate, but at much lower levels than their conventional counterparts: “All but two were below our scientists’ health-based benchmark, although one dry chickpea sample had the highest average level of all our samples.” Since glyphosate use is not permitted on organic crops, EWG believes these samples may have been contaminated by the chemical drifting from nearby conventional crop fields, where it was likely sprayed as a pre-harvest drying agent.

So, the bottom line: it is best to do a little research, buy from trusted organic sources and choose dry over canned, organic over conventional and know you’ve done the best for your family that you can possibly do. Be brave. But there’s one thing more you can do—sign EWG’s petition to get glyphosate out of our foods—like cereals, for goodness sakes! And donate if you can to keep their critical work going.