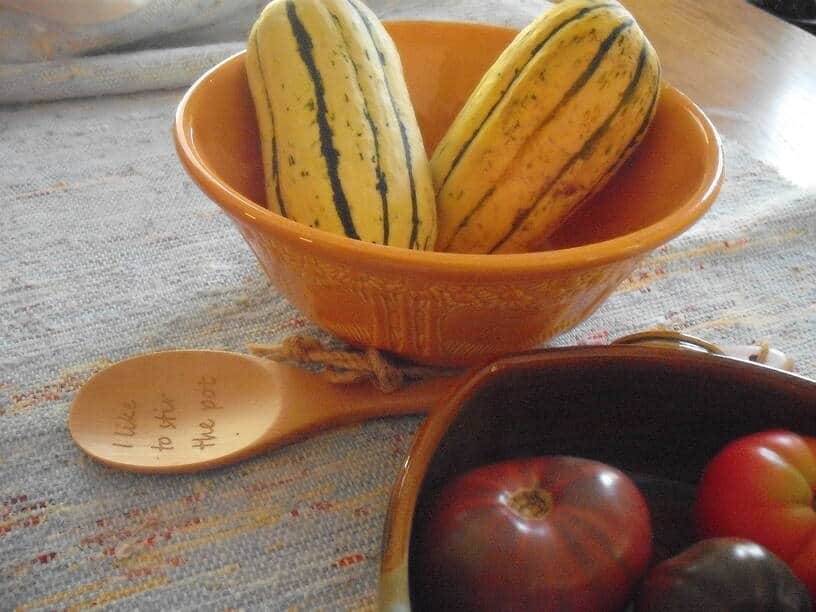 Everybody knows by now that I love fall and winter squash—just about any kind, from pumpkins (that are food not decorations) to butternuts. And by far, my favorite is delicata, which until recently could only be gotten at the farmers markets. The grocery stores are so slow to catch on the fabulous local food, but delicata squash is turning up regularly now at major chains, though I still get all mine from my local farmers.

Delicatas store well, though not as well as the harder squash like pumpkins, butternuts and acorns. And their beautiful peach-tone flesh is super sweet and rich when roasted. Because of their relatively small size, they are easier to manage in the kitchen, too—a good cutting board and a sturdy chef’s knife are all you need. The seeds scoop right out and can be dried, stored and replanted next year! 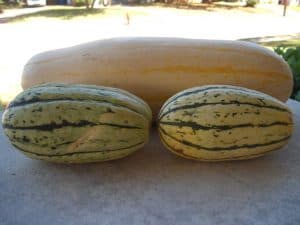 Sometimes, though, things grow a little bigger out on the farm. I bought the delicata squash in this photo from Biver Farms, and, as you can see, I got perhaps the biggest delicata at the market….perhaps at any market. Where is a county fair when you need it?

So the recipe below, which is TO DIE FOR, if I might add, took me only my one supersized delicata (which I’m guessing might have fooled around with a cute little butternut out in the field), but it will take you four, at least, because I’m thinking you are more likely to find standard size squash at your market. You’ll probably still have stuffing to spare, but that can be a good thing, yes? Not to mention the bonus of each diner having her own little stuffed boat of flavor—so cute! So let’s get cookin’!

But before we do…if Millet is new to you, check the end of the post for further information on this gluten-free, super-nutritious grain. And please read through the recipe before you start, so that you can schedule this dish into your menu, as there are several make-ahead steps that are easy, if you plan. Be brave—you’ll squash this!

Don't freak out about the prep and cook times. These times represent the entire process--the millet and pears, the squash and stuffing. Doing some steps ahead makes this way easier.

Millet was new to me when I started this blog, but I’m always looking for gluten-free options for my daughter and my friends who need or desire to eat gluten free. Millet is perfect, with high nutrition and a chewy, satisfying texture. I have always cooked with ancient grains–there are posts using barley and wheatberries, for instance. But the serious gluten-free search led to millet, which is hardier than quinoa, when you want a more substantial grain that actually chews like a grain. Most health food stores carry millet, and it is finding its way into more mainstream outlets, as well.