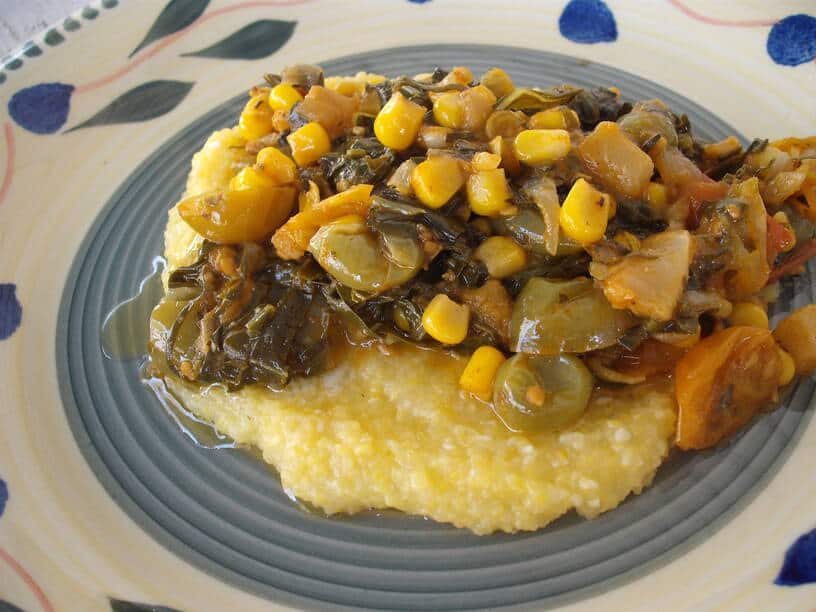 As most Green Gal readers know, I worship the ground Chef Vivian Howard walks on. So it should come as no surprise that when her PBS series A Chef’s Life came to its final episode, I was inconsolable and weepy for weeks. True to her nature and her calling, Chef Howard ended the show not by highlighting the many accomplishments that have come her way—the culinary awards, the best-selling cookbook, the publishing tour, the celebrity and fame—she chose to highlight the people around her who have been with her on an amazing journey, appropriately taping the final scene in the middle of a cornfield, at a long beautiful table full of signature southern food, toasting the people she cares about most—family and friends.

It was beautiful, bittersweet and I was pretty sure I was going to pack up my house, move to North Carolina and eat at least once a week at Chef and the Farmer, her first restaurant. But, of course, I didn’t. I dried my tears, pulled up my big-girl overalls and just moved on, basking in the occasional rerun during public television pledge breaks.

And then…this fall…she was back! And she was headed Somewhere South, on an incredible trip to places–yes, but more importantly into cultures, somewhat familiar but also far from her own table, not only through counties and regions of the South but also through history—much of it never told in mainstream—and deep into Black, Creole, Immigrant and Indigenous cooking traditions. I’ve seen every episode and am still watching. My two favorites are about porridge and greens, which got me started on the dish I’m sharing below. Because, of course, I wanted to celebrate, too, in my kitchen! 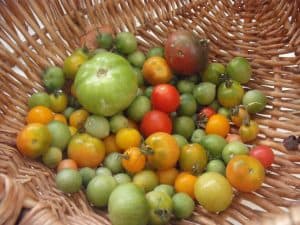 And that is how this dish for collards came to be—through inspiration from “somewhere south.” Well, some of the inspiration came from my own backyard, as well. The tomatoes in this dish were a “hodge podge” of what was left on the vines in early October—much of them green and quite tart. I thought these leftover misfits were the perfect ingredient, though, because including them was mindful and humble, as well as interesting—a combination closely akin to the cultural dishes Chef Howard featured in her new series.

Collards usually show up at the farmers markets in fall around here, making a second appearance as the weather cools, as does the last of the kohlrabi. So this dish sort of just fell into the pot, so to speak. But before you get out your pots and pans, I need to let you know that my ingredients will be difficult, if not impossible, to find right now. However, now is when we plan, right? When we order seeds, go through cookbooks, make notes for the garden. So think of this post as a planner—how to eat healthy in the coming spring.

Collards and kohlrabi should show up by late May or before. So will fresh garlic, spring onions and herbs, all of which will work well in this dish. The tomatoes could be a challenge, though. Green tomatoes, much less ripe ones, won’t be around until late June where I am. So a good substitute could be frozen tomatoes or canned tomatoes from the current year, if you’ve put them up. What will shift the flavor slightly is the absence of the green tomatoes, which were tart and created a beautiful balance to the sweeter ingredients—like the ripe tomatoes and the corn. So if you find tomatillos at a global market, I’d suggest trying those until green ones come on. You’ll figure it out. Be brave!

Prep and Cook times do not include the grits, which can be prepared easily while the collards cook.

Collards: How to Make the Cut

Collards are big sturdy leaves and benefit greatly from the right preparation. In this case, I used a method called chiffonade, removing the tough center stems by folding the big leaves in half and slicing off the stem; then, rolling up all the stemless leaves and slicing super thin into little ribbons. Here’s how it goes: 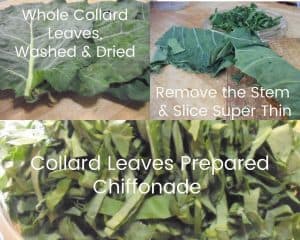 If you are wondering about how to choose a Cajun-inspired spice mix, feel free to take a look at my recipe.

Greens are a great addition to winter meals, and you can find them at grocery stores and winter farmers markets much more readily than you used to. Check out my Winter Greens Salad and my favorite Detox Salad Dressing to put a little healthy nutrition into your winter diet.