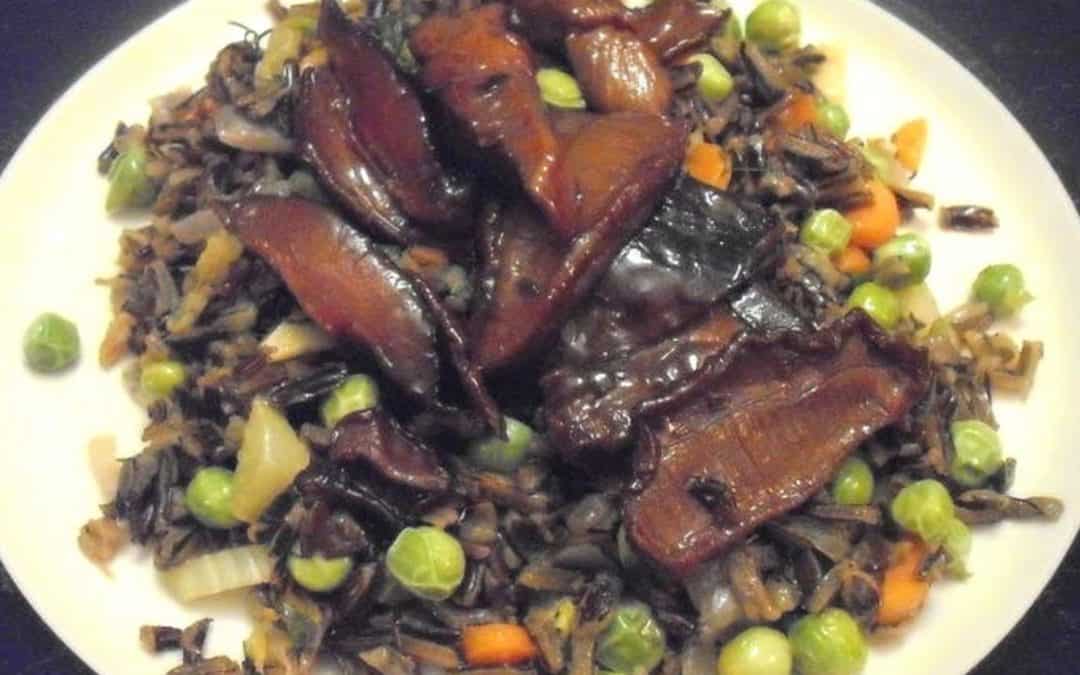 Well it is the beginning of Carnival season. So when my friend and local mushroom guru Leo suggested I try my hand at Drunken Mushrooms…mais bien sur! I trotted on over to his house to pick up some fresh shitakes and his basic recipe, then headed back to the kitchen. Laissez les bon temps rouler!

I’m sure you remember my friend Leo and his amazing local mushrooms. He started out with gray and pink oysters, which are truly amazing. But his shitakes….Ooh la la!

To give these healthy fungi a flavorful base, I remained in the French Quarter by creating a Wild Rice Pilaf that just paired beautifully. Why wild rice and not something more traditional? According to New Hope Network, gluten-free foods aren’t slowing down in the next decade and neither are grain-free diet choices. Wild rice, despite its name, is not a grain at all; it’s a naturally gluten-free grass. So for those with grain-restricted diets or who suffer from full-blown Celiac Disease, wild rice is a better option. And it tastes delicious, with tons of earthy flavor that compliment those Drunken Mushrooms. So let’s get cookin’, and after the recipe, we’ll look at what 2020 will mean for our gluten-free choices.

Just one note before we start: you know me and rice—I take a lot of time with it, toasting, boiling down to dry and quick chilling it ahead of preparing recipes. Usually, I leave it up to you how you prepare your rice, but this time I’m sort of insisting on my way because the preparation of the rice is crucial to getting the right texture and the enhanced flavor. I’ve intentionally left the usual pasta out of my pilaf, so texture can be tricky. Be brave! (You knew that was coming.)

Serving Size: about a cup and a half 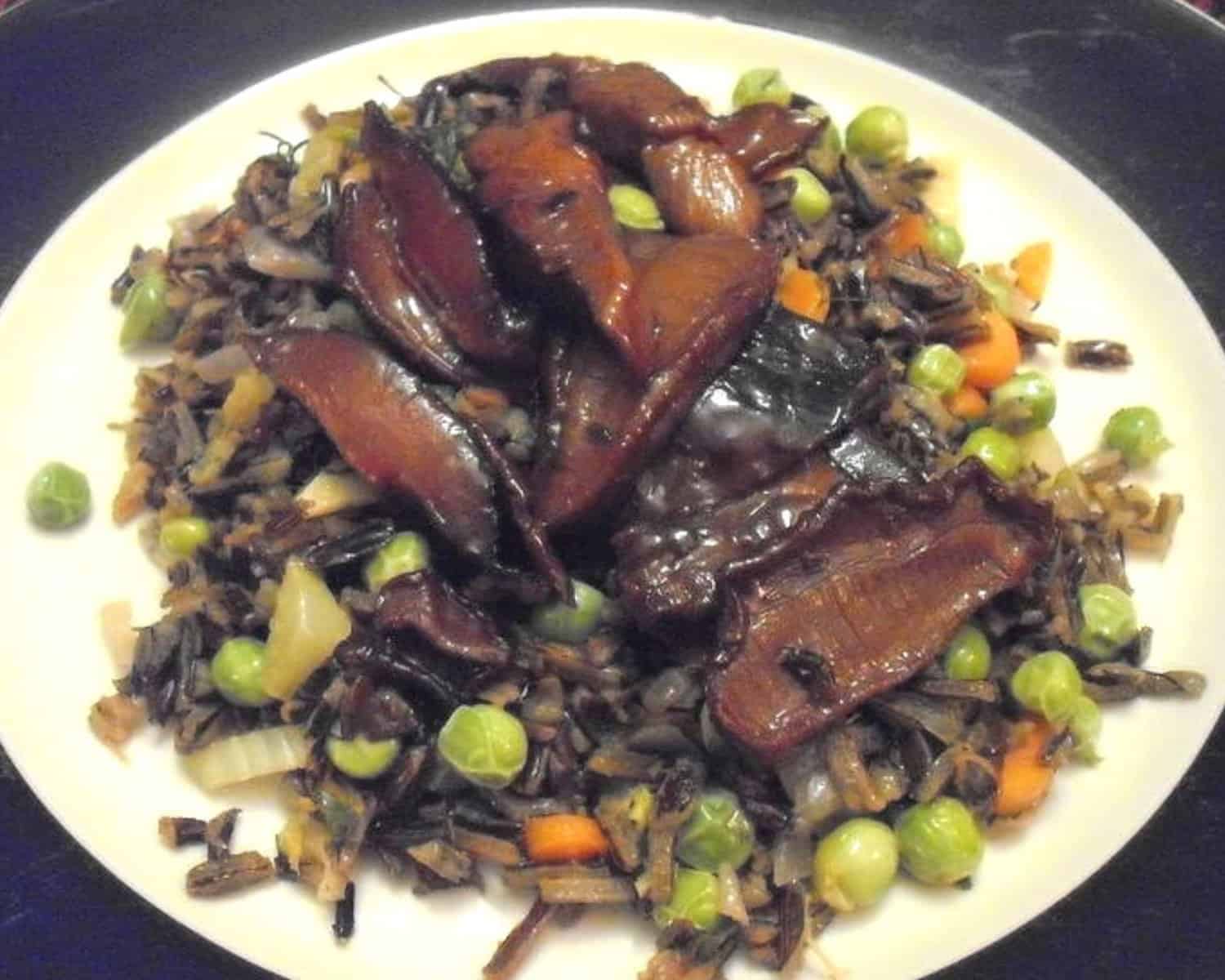 For the Drunken Mushrooms (based on a recipe Leo was gifted from his Taoist buddy.)
For the Wild Rice Pilaf

The recipe above is gluten free, with few worries of contamination, even though a main ingredient is rice. Rice, like oats, can be risky for diners who have celiac disease. Rice and oats don’t contain gluten themselves, but they are commonly harvested and processed in places and on equipment that is shared with wheat and other gluten-containing foods. But wild rice is different because, as noted above, it isn’t a grain but a grass. So those who are grain-free can also enjoy its rich nutty flavor without compromising their diets.

Further, wild rice has added benefits. According to the website One Green Planet, wild rice enhances digestion; it is anti-inflammatory; it’s full of protein, folate, manganese, zinc and iron—the vegetarian/vegan’s dream food. So expect to see more of it popping up in recipes and restaurant menus in 2020.

New Hope Network interviewed Jeanne Reid, marketing manager at Gluten Intolerance Group (GIG), a nonprofit that certifies gluten-free products, to get the scoop on what gluten free will mean in the coming decade. Reid, a mother of three, went gluten-free with her family seven years ago when her youngest son was diagnosed with celiac disease. Below is her take on the top gluten-free trends to watch in 2020.

Reid explained that “when GIG began in 2005…it only certified Enjoy Life [love those chocolate chips!], which was its first company. In 2010, the group certified approximately 10,000 products.” But as of November 2019, GIG has certified 63,794 products worldwide. “It’s expecting 8-10% growth over the next five years, and the U.S. is the largest gluten-free market,” said Reid. The reason? According to Reid, one percent of the U.S. population has celiac. That’s three million Americans. But up to 13% of the U.S. population is believed to have non-celiac gluten sensitivity–that’s my daughter, Heather, and she’s one in about 40 million Americans. That’s a lot of consumer demand!

Going beyond bread, gluten-free products are going to pop up in places you might not expect. Reid pointed out that the gluten-free market is expanding, as gluten awareness enters the makeup and skincare space. “This is largely because brands such as Arbonne are realizing that individuals with celiac disease can have reactions to gluten in other products, even when eating isn’t involved,” explained Reid.

And this makes perfect sense to me. Early on in her gluten-free journey, my daughter’s doctor had her start checking the labels of everything from shampoo to body lotion to deodorant. And the same now goes for vitamins and probiotics. Gluten-sensitive people don’t want to put things on their lips that have gluten because, as Reid explained, that can then cause a form of dermatitis herpetiformis, which manifests as a skin disease sans G.I. symptoms. This is why companies such as Country Life and Garden of Life have gluten-free vitamins.

As knowledge grows, companies are upping their transparency game, too. Label transparency is becoming more important with 29% of all shoppers seeking some type of certification. And having a gluten-free certification can help smaller companies stand out when they are looking for more regional and national distribution channels.

One of the biggest challenges for me when I’m baking is flour—trying to find high-performing GF flours from names I trust. Reid says that while people once had to buy multiple flour brands, many companies are now producing easy-to-use flour blends. One of my favorites, King Arthur Flour is among the frontrunners. Yeah!

There’s even more interest in grain-free flours because the Paleo movement is so popular. Think garbanzo bean, black bean, mung bean, lentil, cauliflower, coconut and almond flours to name a few. And add to that fruit flours such as apple and banana flours–also new trends in this market. Other innovative options include coffee flour and beet flour. So stay tuned.

Of course, I didn’t find all the GF predictions exciting or even welcome. In fact, one particular trend was sort of disappointing: there will be a greater demand for gluten-free convenience foods–grab-and-go meals, soups and other prepared foods, according to Reid. Now I get it that people who must avoid gluten have a lot of trouble finding anything safe and convenient, but to me this says there will be more “processed,” foods around that are expensive and, even though gluten free, are basically less healthy. I go back, of course, to Michael Pollen—eat real food.

And here’s an eyeopener: More liquor brands will become certified gluten-free. Who knew liquor can contain gluten? Well, I did because my daughter once loved beer and vodka, but both are made with wheat. No brands were putting “gluten-free” on their labels. But now, that may be changing. Reid said that tequila, vodka and even beer companies are becoming more interested in gluten-free certification. That’s a big difference from being “gluten-removed.” Some companies think they can remove gluten while still using a barley-based beer. Most organizations won’t certify those products. However, there has been a big uptick in liquor brands that want to tout the fact that they’re using gluten-free grains.

Reid said that oats will continue to be scrutinized in the coming decade, and how oats are sourced and certified will continue to be a hot topic. “Oats are being used in more gluten-free products,” she said, “but there’s confusion about what it means for a product to be made with gluten-free oats that are safe. Using certified gluten-free oats is your safest bet because it’s a high-risk ingredient for cross-contamination with wheat and other gluten-containing grains. There are some people, mostly those with celiac disease, who can’t tolerate oats in any capacity even though they are technically gluten-free.”

So that’s the rundown on gluten free in the 2020s. I’m sure there’s more to come, but overall, I’d say the news is good. We all want a variety of choices when it comes to the ingredients in our kitchen cupboards. Sounds like this decade will provide that–basically because of consumer demand. So we should all remember that the next time we are wishing companies would be more environmentally friendly, source their ingredients locally, use less packaging, go organic or be more dedicated to healthy clean food. We have the power to create change…we just need to keep asking for what we want and rejecting what we don’t want. Onward!

Portions of this post were provided by New Hope Network. I am a member of the New Hope Influencer Co-op, a network of health and wellness bloggers committed to spreading more health to more people.