Eating Choices: You Are What You Eat 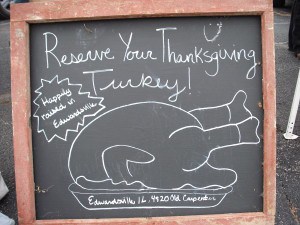 We’ll be ordering our turkey from MOB Farms this weekend.

You’ve probably caught on to the fact that I frequently give my husband a hard time for eating meat. I chose to be a vegetarian many years ago simply because I felt better with a predominantly plant-based diet. While I do eat a small amount of ocean fish, dairy and eggs, most of the foods I eat are fruits, vegetables and grains.

There is a lot of research to support a plant-based diet for both human health and environmental sustainability. However, nothing is simple, as was made especially clear to me by Barbara Kingsolver in the chapter “You Can’t Run Away on Harvest Day” from her bestseller Animal, Vegetable, Miracle. In this section of the book, Kingsolver discusses her family’s decision to return to eating meat, once they had access to locally grown, humanely treated animals—including the animals they raise themselves for harvest.

As Kingsolver so eloquently puts it, humanely raised, locally sourced meat is a far better environmental choice than the organic, fair-trade, bananas I put in my smoothie (not to mention that organic avocado from Mexico I used in the last post). The carbon footprint for my bananas and avocados is much larger than the one associated with my husband’s hamburger, where the ground beef was raised and processed only two counties away.

Can an old vegetarian dog be taught new tricks? You bet she can. I will probably never go back to eating meat, but I have learned that this choice is a privilege as much as it is a decision of health and conscience. Kingsolver explains it this way, giving credence to both sides of the argument while realistically acknowledging the elements of geography and climate that color our choices:

To breed fewer meat animals in the future is possible; phasing out those types destined for confinement lots is a plan I’m helping with myself, by raising heirloom breeds. Most humans could well consume more vegetables foods, and eat less meat. But globally speaking, the vegetarian option is a luxury. The oft-cited energetic argument for vegetarianism, that it takes ten times as much land to make a pound of meat as a pound of grain, only applies to the kind of land where rain falls abundantly on rich topsoil.

Her point, and mine, too, for that matter, is that eating and survival mean some form of destruction, whether you are butchering cattle or combining corn in a field that is home to a million insects and small animals. It’s just a matter of where you draw your psychological line.

But making informed and responsible choices about how the food you eat is raised (humanely in a pasture and without the use of pesticides and herbicides) and where it comes from (your own county or the next two over as opposed to halfway across the globe) is not a luxury, it’s a choice. And we all—to a greater or lesser degree–can make the better choice much of the time—carnivore, vegetarian, city dweller, nomad, farmer. Your local farmer’s market is a great place to begin, where you can meet and talk with the people who grow your food–vegetable and animal.

“We are what we eat” is both a true and very complex statement.

If you are interested in this discussion, you might look at Heifer International, a highly successful charitable organization who’s mission is to “work with communities to end world hunger and poverty and to care for the Earth.” Their philosophy of “give a man a fish” is a pretty good example of promoting sustainability in a realistic and humane way.

Of course, you are always welcome to join the discussion here.