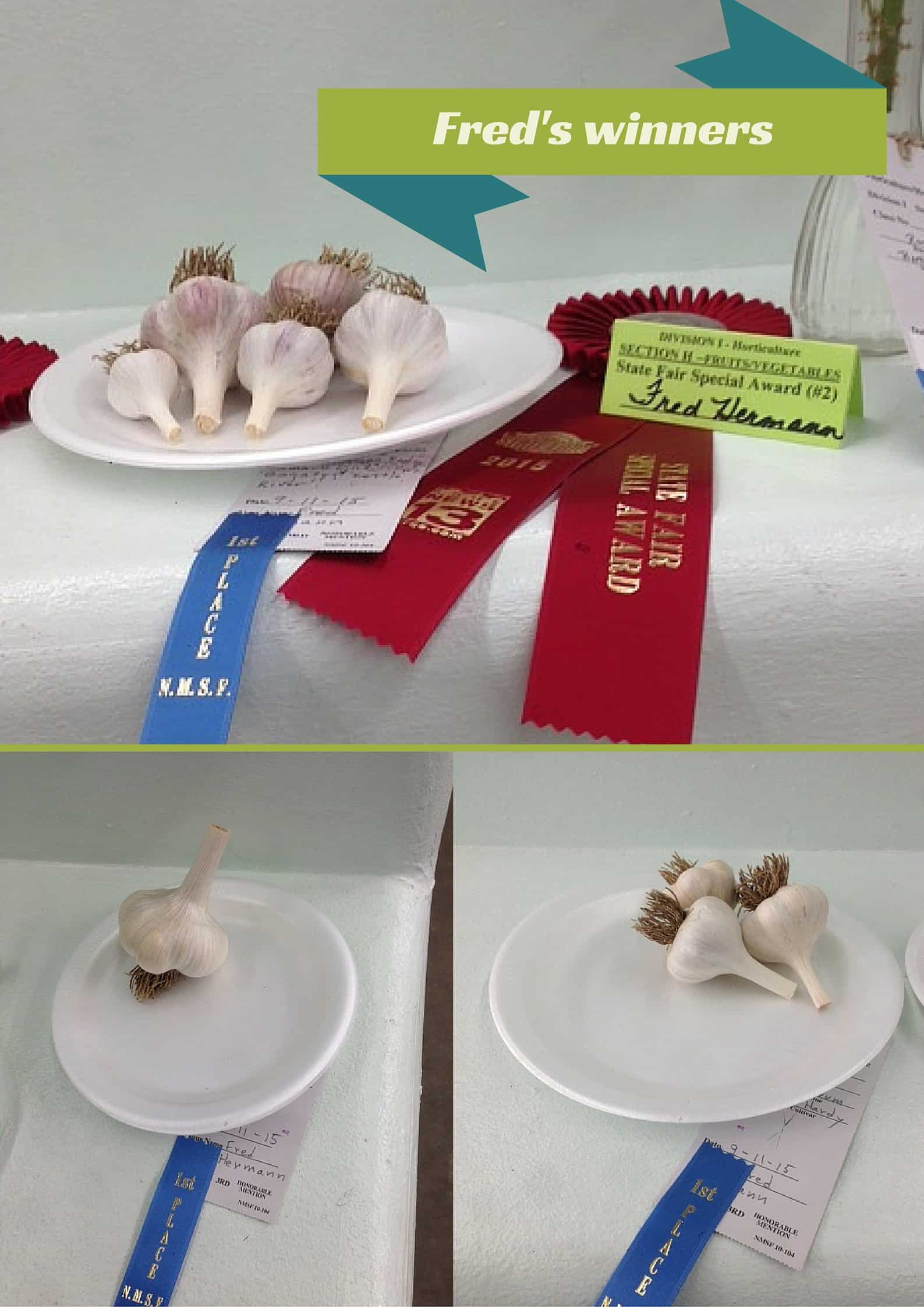 If you’ve been reading along, we were in New Mexico for the last post, visiting a spice magician and whipping up a pot of chili with tofu. I thought we’d stick around the Southwest a bit longer and celebrate the recent achievement of New Mexico Master Gardener Fred Hermann. Fred is a follower on Green Gal of the Midwest, and he and his wife Jane Dillon-Hermann have an amazing garden on their property in Tijeras, NM, a community that lies at the south end of the famous Turquoise Trail in the Sandia Mountains. This year, Fred’s garlic took three blue ribbons and a Rosette for Best in Show at the New Mexico State Fair. Quite the honor for this incredibly gifted, easily humbled gardener and creative cook. 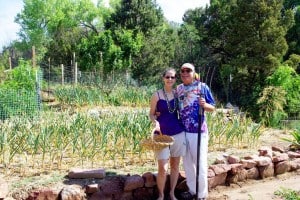 It’s my friend Deb who introduced us to Fred—via that prize-winning garlic. She and Fred go way back to college days at Southern Illinois University Edwardsville, and she takes a visit to his place every other year or so. He became a BFF of ours before he even knew who we were—via that garlic. Now that we know each other through phone and Internet, it’s gotten rather magical. You see… Fred and my husband Don go way back, too. 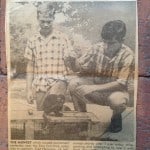 Fred’s “monkey business” was covered by the local paper.

Though they didn’t realize it, Don and Fred have actually known each other since childhood, living in the same neighborhood and sharing an incredible “acquaintance.” At age 14, Fred and his friend found a small monkey wandering near his home in Belleville, IL. Fred thought the monkey would make a great pet, so did his friends… but not his mom. Eventually, she told Fred the monkey had to go—winter was coming and that “animal” was not coming in the house. Fred decided to sell the little guy to a good home. But, come on, who’s going to buy a monkey?

My husband’s sister, that’s who. Don’s sister Patty bought the monkey, named it Coco, and kept it for several years as a family pet. Who knew that Fred the Garlic Guru was also Fred the Monkey Monger? 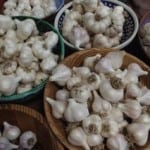 But, I digress… back to Fred’s garlic and gardening in NM. It’s not as easy as his photos suggest. Like any geographic area, Tijeras presents its unique set of challenges, most notably the dry wind that, according to Fred, can strip the air of every molecule of water, leaving his plants gasping for life-giving humidity. There’s also high mineral content in New Mexico water. Fred has seen the ground literally go white with calcium deposit. And, being closer to the equator, the light diminishes significantly during the late fall and winter.

Yet, he wouldn’t give up gardening for anything. One of his favorite books is The Winter Harvest by Eliot Coleman, which is a reference for year-round gardening techniques (Fred’s already had two rounds of frost!). Like my local farmers here in Illinois, he’s giddy when the new seed catalogs appear (his go-to is Seed Savers Exchange); he’s out in the cold and rain to get the garden “in on time” every spring; and (Deb says) he nearly “dances” around the kitchen as he cooks up his backyard bounty. 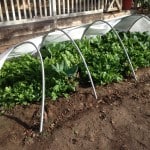 He has a hoop garden so that he can extend his growing season and put fresh greens on his table through the fall—maybe all the way to the New Year’s Eve buffet. He grows everything from asparagus and onions, beets and carrots, corn and tomatoes, to peas and zucchini. Last year he tried French Melons and fell in love with their sweet orange flesh. So they are sure to be a repeat.

From our standpoint, a reunion with Fred is long overdue. Seems like an in-person visit down New Mexico way is now on our bucket list—sometime during the height of the growing season, I’d imagine. After all… he and my husband are old friends. What a green gal won’t do for a fresh French Melons and some prize-winning garlic.

Generous to a fault, Fred and Jane have been kind enough to share a favorite recipe that, of course, makes great use of garlic. Tofu Adovada (from Chile Pepper Magazine’s Hot, Spicy & Meatless Cookbook) works as a great main dish or an excellent side. Fred likes to serve it with rice or quinoa, along side some stir-fried bok choy, kale or spinach. He has used it in place of traditional New Mexican Pozole and has seen it as a substitute for the rice in a traditional beans and rice side dish. I think it sounds delicious and plan to make it the next time I’m hungry for tofu—how about you?

For Tofu Adovada you will need: