Good to the Bone 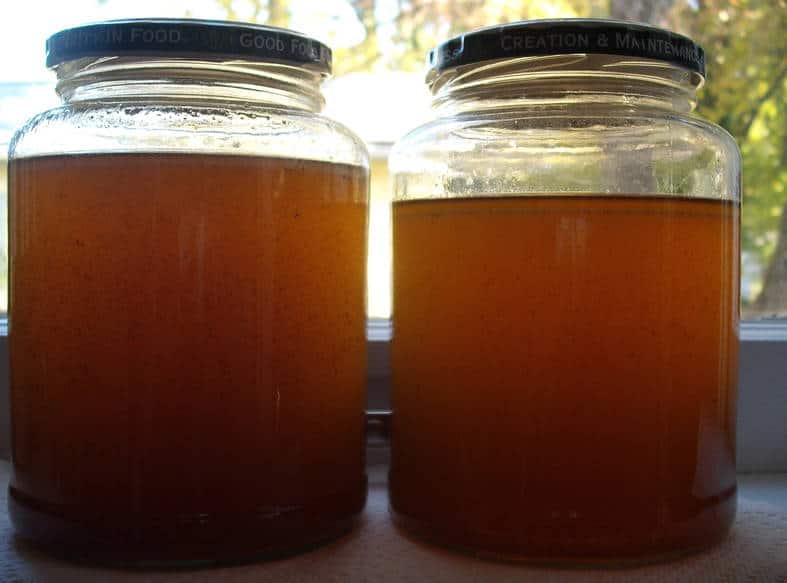 When Dara Simmons, owner of SS Backwards Longhorns, and I became friends at the Land of Goshen Community Market, we quickly realized that even though she was a meat vendor and I was a vegetarian, we had a lot in common. Amazing how that farmers market brings people together.

For one thing, we both have husbands who are sorta picky eaters and who don’t always make the best food choices on their own. Dara is also bringing up two handsome sons, and she’s determined to influence their eating habits for the good while they are “impressionable”. So we’ve spent a lot of time talking about ways to put healthy meals and quality, clean food on the dinner table.

Bone broth is a key component on Dara’s family menu. She’s convinced bone broth that is carefully cooked from fresh, clean beef can cure just about anything and keep everyone happy and healthy. Let’s face it, if anyone has access to fresh, pasture-raised clean beef, it’s Dara. So I was anxious to buy some of her soup bones and make some bone broth for myself…. Well, I was anxious to make some for Don. And as we head into winter and the season of colds and flu, this is quite the timely recipe, don’t you agree?

It only took a little research to convince me (the vegetarian, remember) that Dara is really on to something. Bone broth now exists in convenient commercial brands and even in supplement form; you can literally take a pill or put a scoop of powder in your smoothie and get the benefits of bone broth. Well, maybe. “Instant bone broth” sounds just a little fishy to me, as I attempt to mix my metaphors. I’m sure there are great products out there, but I wanted the real thing for Don. So into the kitchen… 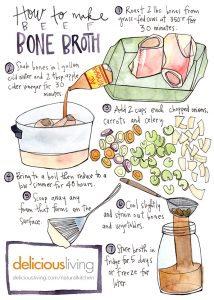 Dara gave me lots of pointers on making my own bone broth, like using my slow cooker instead of the stove. Nearly every bone broth recipe I looked up listed a cooking time of 24 to 48 hours. Not kidding—apparently the longer the better. So Dara’s recommendation of using the slow cooker overnight was priceless. She also had just the right soup bones for my project—so meaty that Don was able to make a meal out of the beef I retrieved out of the broth! Just threw in a few noodles, and he was good to go.

Then I found more great tips from the folks at Delicious Living Magazine. I shared their recipe with Dara, and we both agreed it was a keeper. They even offer this free printable PDF that illustrates each easy step, so you can save it in your recipe file. So let’s get down to the bone with a recipe that incorporates both Dara’s suggestions and Delicious Living’s great recipe.

Yield: about 8 cups of broth

About the prep time: this includes the 30-minute roasting time, the 30-minute soaking time and 30 minutes to prep your vegetables. About the cook time: 24 hours is the absolute minimum, which might be your choice without a slow cooker. But the longer you cook the better and more healthy your broth will become. Bone broth should keep about a week in your frig and can be frozen for use later on.

Bone broth depends on low and slow. To achieve the healthy benefits, all sources recommend cooking for at least 24 hours; many—including Delicious Living—recommend 48. I sort of split the difference and stopped at 30. Since it is not advisable to leave a stove on and unattended, the slow cooker is the way to go, if you have one and yours is big enough to accommodate the gallon of water and all the ingredients. If you don’t have one or one that is big enough, you can, according to the website Epicurious, halt the process and “simply cool and continue simmering the next day.” However, this seems cumbersome to me and not totally “ok” for health concerns, so I strongly advise the slow cooker—you won’t regret the purchase of this useful tool. Put it on your Christmas list!

It can be tricky straining all this broth out of a large pot. I used a big measuring cup to transfer the stock to my strainer that I had positioned over another large measuring cup. From there, I transferred the strained stock into jars with tight-fitting lids. The measuring cups are better than bowls because they have a spout. If you have one of those nice bowls with a pouring spout, by all means use that. 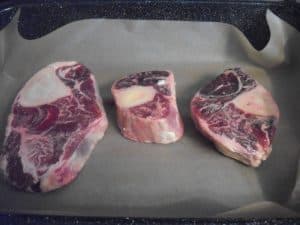 As you can see, SS Backwards soup bones are quite meaty. They made excellent broth, with ample meat leftover for beef and noodles.

Quality certainly matters here. You want the cleanest beef and the meatiest bones you can find. If you are local to southeastern Illinois, I can’t recommend SS Backwards Longhorns strongly enough. Give them a call and work out how to pick up an order. They will be at the Land of Goshen Community Winter Market on November 18, 8 a.m. to noon, in the basement of the New Song Fellowship Church. The church is right on the street where the summer market takes place.

I used two cups of this bone broth as the rich base for a special beef stew we will be serving during the holidays, and Don consumed a cup of broth a day for about a week as an afternoon pick-me-up. But we still had about two cups left that went into the freezer to be used later, either as healthy broth to sip or as a prized ingredient in another beef dish. So, all in all, well worth the effort.

I’d love to hear about your best bone broth. Share the healthy love this season of Thanksgiving, and include any recipes that take advantage of this healthful homemade ingredient.