Home Cooking at La Vista: A Recipe for Courage 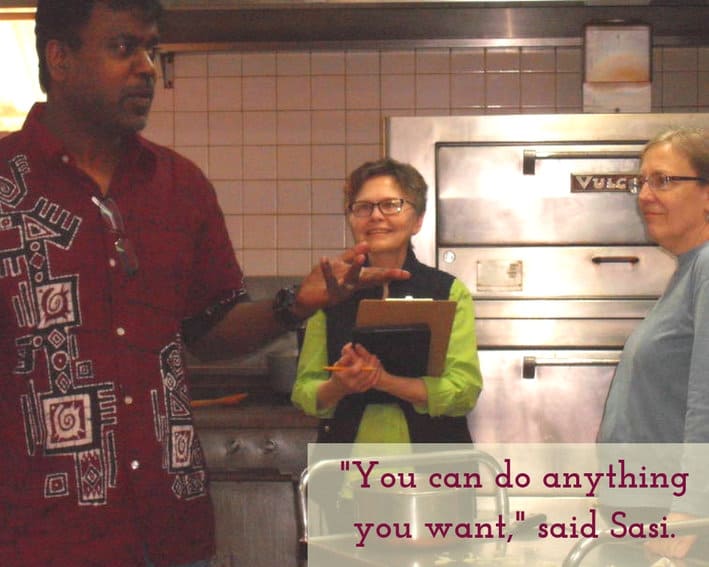 Home makes me hopeful and warm and happy. I’m not really talking about the little house in which Don and I live, though it’s pretty sweet. I’m talking about home more as an emotion—the feeling that there is deep meaning beyond what is apparent in some moment in time—almost a Déjà vu sort of thing, like recognizing or knowing something that you could not possibly have physically experienced before. And all these special moments in my life come when I least expect them—when I’m not looking for something but rather when I am found by something. Home.

And Home is my best way to describe the cooking class out at beautiful La Vista Ecological Learning Center a couple of Saturdays ago. We were nearly a room full of strangers when we started. There were some familiar faces, but many people I’d never met. I just knew right away that I belonged.

It helped, of course, that Sasikumar Balasundaram—that’s my brilliant friend Sasi—was the instructor who would help us master some traditional dishes from his home country Sri Lanka. But Sasi, whom you will probably remember as the anthropology instructor who invited me to his class last fall, gave us so much more: the theme of his cooking lesson was a simple one—be courageous.

And like all simple messages, there was much wisdom below its surface and proved not as easy to execute as it seemed…at least not in the beginning. But we all tried to believe in our own bravery, as Sasi began throwing rice into pots of bubbling water, setting up prep stations where folks shredded peppers and beans and cabbage and coconut, heating oil in big, well-used woks, and talking and smiling all the while. I never once saw any sort of measuring cup or spoon. Not kidding. (The coconut reamer was amazing, though, and I got to use it! On my wish list!!)

Occasionally someone would look up from his or her piece of the projects and ask: “How much did you want in that?” And Sasi would answer: “Well how much would you like? What are the flavors you want?” You see, Sasi is a really talented teacher, encouraging his students to learn rather than directing them to replicate.

I know that many of us—myself included at a few points—really did not think all these dishes (and there were many) would come off. After all, on this blog I spend a lot of time getting measurements and quantities down to nearly a science before posting a recipe. So, I had my doubts, but I—like everyone else in the kitchen—was carried away by the magical energy Sasi created. He just kept saying, “Trust what you like; don’t worry about the way other people cook—cook for yourself—be courageous.” And we did and we were.

Woven into the actual cooking class, were threads of larger conversations—using what you have and not wasting food, for instance: “If you don’t have tahini,” Sasi explained, “just toast a bunch of sesame seeds and toss them into your dish.” Talk of clean food and food scarcity related to climate change. Graditude, for the bounty we were enjoying.

Near the end of the food preparation, as dishes were coming together and tables were set, Sasi suddenly said, “Oh, we need to make the bread!” Seriously, I thought, you’re going to start the bread now? And then he threw some white and whole wheat flour into a big bowl, added a handful of salt and ran in some warm water. He worked this into a beautiful soft dough and handed me and several other people rolling pins with a big smile. The only instruction was to pull off small bits of dough and roll them super thin. By dinnertime we had a basket of fried bread that had great flavor and perfect chew. It pays to be brave. 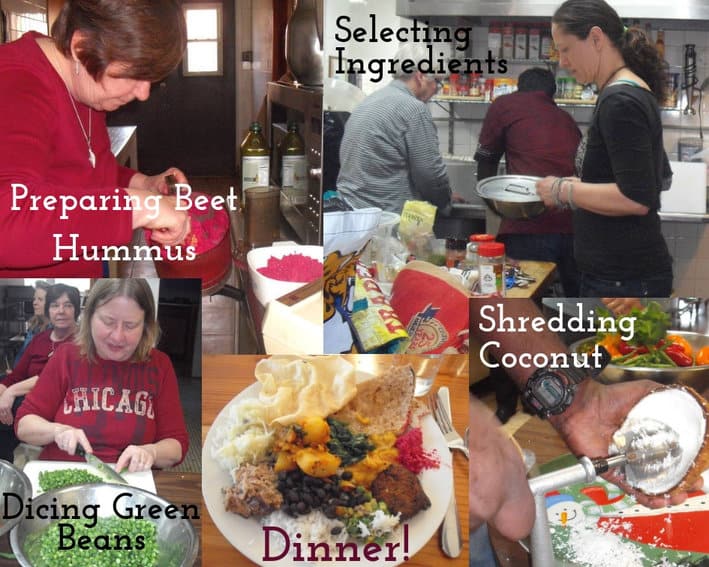 So here is the final menu:

You’re jealous, right? Well, take heart. I couldn’t brag about my wonderful cooking class experience without offering you a sampling, right? Sasi has agreed to share his recipe for Falafel, a classic Middle Eastern dish made with chickpeas and other yummy ingredients that are roughly pureed and formed into balls or fritters and then fried until crispy on the outside and tender on the inside. Served with a simple Yogurt sauce it’s delicious. YUM!

For the Yogurt Sauce
For the Falafel

Falafel is quite rich, so serving size really depends on how hungry you are. Note that the prep time does not include soaking the chickpeas overnight, but does include the time it takes to make both the yogurt sauce and the falafel mixture.

What an amazing meal. Much of the credit goes to Sasi who had faith in us to be courageous. And to Sister Max, who has a magical way of bringing people together to do good works and build community. It goes without saying, we were all blessed as we sat down to eat this communal repast. Several days after the class, Sasi shared a comment he’d received from one of our participants. I thought I’d share it because it’s a perfect example of how far beyond the physical meal we were able to go:

I want to tell you how much I enjoyed your demonstration.  You are so talented, and I appreciate the fact you are willing to share your talents as far as food and general knowledge.

The present political situation in our country makes me so sad……but you instilled hope in me. I was reminded what real leadership looks like and was inspired  to see people working together to  make a better world.  I don’t worry about the future for myself so much, but for the younger generations which includes my grandkids who are 7, 10 and 19. Thanks again for all the delicious food and all the fun in preparing, serving, and eating the meal.  Saturday was the perfect day in many ways.

So, are you thinking you wished you’d been there? Well join us next time! If you would like to attend a class at La Vista, there’s nothing to stop you and every encouragement to join in. You can always find something going on in this beautiful setting that will nourish mind, body and spirit. For myself, I’ll be attending Among the Trees on Saturday, April 6, a day-long retreat filled with intentional thought, hiking, learning and eating, “as we consider the intelligence, wisdom and social nature of trees and of ourselves. Hope to see you among the trees.