How to Bake a Miracle 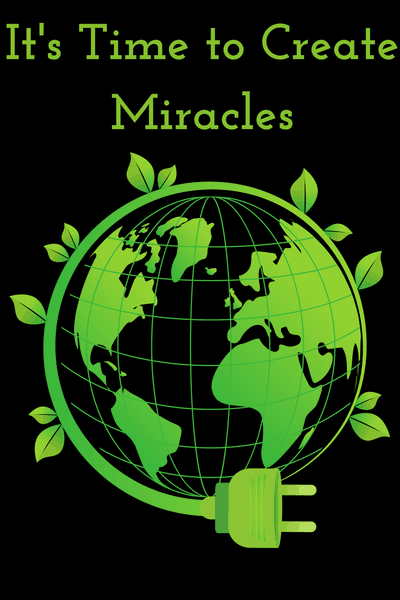 Many years ago now, one of my very best friends Mary Lynn had a second thought about some overripe bananas and turned them into a miracle. I remember the day she and I were on one of our marathon phone calls, and she told me what she’d done just a few days before, saying that, though she wasn’t sure why, this simple act made her feel as if she had done something BIG. And as we continued to talk, we both realized she had. Here’s the story:

Mary Lynn was cleaning up her kitchen and was poised above the trash can, ready to drop in three pretty rotten bananas. At the last second, she stopped and thought that maybe she should reconsider—maybe she could make something like banana bread. Then she remembered a colleague of hers at the time who had recently lost his wife. He was in terrible shape, severely depressed but had returned to the office to try to cope. Though she did not know him very well, she had been moved by his grief, and suddenly decided that he needed a loaf of banana bread. So she granted the bananas a reprieve and got to work baking bread. All the while she kept second-guessing her actions and motives. Would this really be helpful to a man who was so clearly suffering tremendous loss? Would he think she was crazy? Still, to quote another amazing woman, she persisted.

The next day she wrapped up one of the two loaves her recipe yielded and delivered it to her colleague, sort of stuttering the words “Hi, I made this for you. I thought you might like some home baked bread. I had these bananas, and….” Her colleague took the bread and smiled with gratitude and (she’s pretty sure) let a glimmer of true happiness shine through for a few minutes—the first real smile he had cracked in weeks. “Thank you!” he told her. And the next day, he made a point of telling her how wonderful the bread was and that it helped him just to know that someone cared enough to bake it for him.

That’s when I said to Mary Lynn, you realize you have given him his Easter miracle. He’ll begin to heal now.” It was, by the way, nearing Eastertime. She sort of blew the idea off at first, saying it was really such a small thing to do, but the more we talked, the more we both began to think of her granting a stay of execution to the bananas and then turning them into a blessing for someone sorely in need of such as nothing short of miraculous.

As I said, it was nearing Easter and, though Mary Lynn and I don’t give extravagant gifts, we do exchange homemade cards and meaningful tiny treasures for special occasions. Easter has always been an important point in the year for Mary Lynn. She carries within her a deep faith and a commitment to bettering the world for others. Most of her professional life’s work has been helping foster children. And now, she was performing miracles. So…. What would I send this special person for Easter? A chocolate bunny wrapped in gold foil just didn’t seem appropriate, although chocolate is rarely inappropriate, to my way of thinking.

The gift “beyond chocolate” ended up being as personal and simple as the miracle of the banana bread, but I hoped it would give to her what she gave to her colleague, namely a moment of peace and an acknowledgement that she mattered in the world. I wrote her an Easter poem, which I have shared with very few other people since. But I’d like to share it with you. Not because it is a great poem but because it celebrates my wonderful friend and offers—humbly and simply—a way to create miracles that is within our reach and probably happens every day, if only we will pay attention—and you know, give it a second thought. Enjoy. 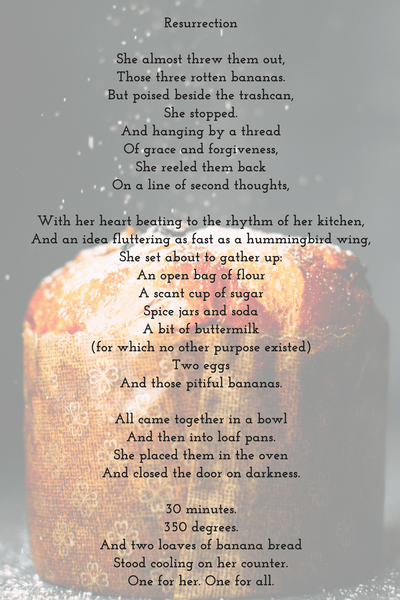 Can Salvation Really Be So Simple?

During the first year I was writing this blog, I created a post for Earth Day that touched on the idea of wanting to fix everything but feeling, in the end, that creating significant positive change was beyond our individual means—we needed a miracle. So I offered small things we could do as mere humans to try to “fix” some of our negative impacts we have brought on the Earth and on ourselves. My suggestions were definitely small (like not wasting food) and humble (like checking in with your neighbor or colleague and making them food), but they were doable, and I firmly believe that they do have impact, if practiced diligently and regarded for what they truly are… simple miracles.

Last week, I had the great privilege to be invited to Project Drawdown, a small informative program hosted in St. Louis that introduced a unique challenge based on the national bestselling book of the same name.

The Drawdown EcoChallenge is offered in partnership by Project Drawdown and the Northwest Earth Institute. Together, these organizations are asking each of us to take action on any of the 100 most substantive solutions to global warming they have identified. They want us to stretch our limits, earn points, and compete for prizes…like a video call with Paul Hawken (author of Project Drawdown) for the winning team! Take the challenge, and see how three weeks of action add up to a lifetime of change for you and the planet. Yes, I’ll say it: create a few miracles!

The 2018 Challenge runs April 4-25. During this time you as an individual or as a member of a team are invited to join others around the globe to take part in simple daily activities to reduce your carbon footprints and delve into the world’s most substantive solutions to global warming. At the end of the Challenge, the teams with the most points will win great prizes, including copies of Drawdown and a one-hour video session with Paul Hawken!

Register for free and invite your community at drawdown.ecochallenge.org.

There are seven categories where substantive change can happen, according to the experts who participated in the construction of Project Drawdown. In their order of most impactful on mitigating climate change (And some of these are going to surprise you!) they are:

Under each category, are challenges—many so easily achieved that any of us can accomplish them. Sustained commitment is the key. Once you take a challenge, you need to keep up your momentum. For example, under Food you’ll find this challenge: “I will enjoy (___) meatless or vegan meal(s) each day of the challenge.” Come on, how easy is that? You can find enough meatless recipes right here on this blog to get you to April 25, even if you vowed to eat more than one meatless meal every day!

I will leave with the words of the architects of Project Drawdown:

Drawdown maps, measures, models, and describes the 100 most substantive solutions to global warming. For each solution, we describe its history, the carbon impact it provides, the relative cost and savings, the path to adoption, and how it works. The goal of the research that informs Drawdown is to determine if we can reverse the buildup of atmospheric carbon within thirty years. All solutions modeled are already in place, well understood, analyzed based on peer-reviewed science, and are expanding around the world.

Now, don’t you want to be part of the creation of miracles?