In a Stew Over the Holidays 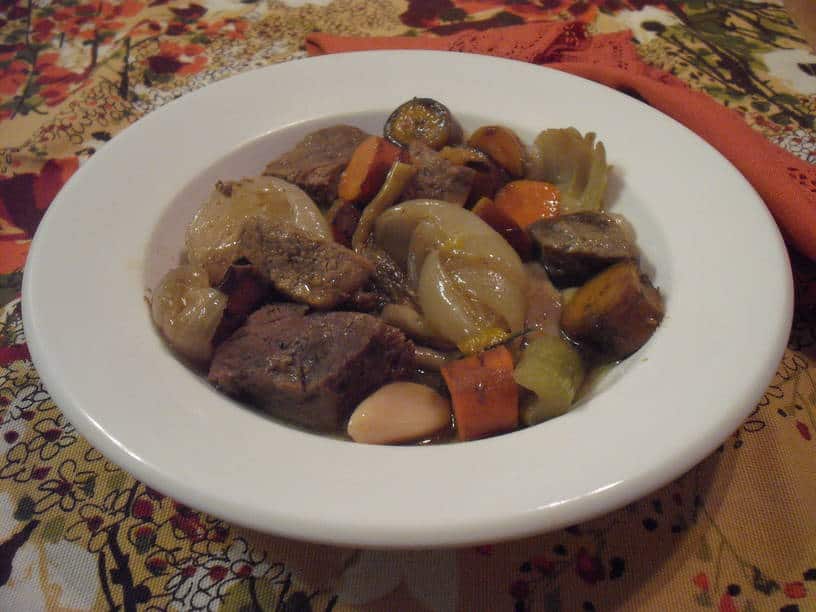 Well, yes, but in a good way. How could I pass up giving Donald something warm and wonderful and made with the nutritious and lean beef from SS Backwards Longhorns? Since we’ve followed the turkey tradition for the past two years, both the large and the small of it, we threw tradition to the wind for 2017 and made this special treat for the holiday table.

Beef Stew actually has a lot of memories for me (no, not always a vegetarian). It was a staple in my house when I was little. In fact, beef stew became one of my dad’s signature dishes. You might remember my dad from a couple of years ago on a St. Patrick’s Day post—he’s Irish. And, from the time I was about 13, he was also a single parent, though I doubt anyone called him that back then. They usually referred to him as a widower with a child, which sounds a lot like a person with an ulcer, now that I think about it.

The thing about my dad’s beef stew was that it was quintessentially “a dish from the 60’s.” What I mean by that is that his stew was something right out of a Betty Crocker Cookbook—carrots, onions, celery, potatoes and stew meat… with additives, like this stuff from the folks at McCormick called a “flavor packet.” What was that?!

If you were growing up in the 1960’s like me, I bet you were one of the first of a generation to taste Koolaid, that packet of artificial sour powder, miraculously transformed into a yummy neon drink with only a cup of sugar per two cups of water. I bet your family loved and marveled over TV Dinners by Swanson. I still remember my first frozen pizza by Chef “Boy-R-Dee.” In fact, this cardboard replica of the real thing is all I knew of pizza for years.

So back to my dad’s stew. He coated the stew meat in flour—white flour, laced with Accent–and browned it in Crisco, then added the veggies, the mystery flavor packet, some La Choy Soy Sauce—his exotic secret ingredient and the basis for his other culinary masterpiece: Chop Suey—Worcestershire sauce, and, of course, salt and pepper. He completed our meal with Minute Rice…remember that?

Memories are great, and sharing that stew with my dad when we were both feeling very much alone in the world was pretty special.

But not in my kitchen today. Not with my Longhorn sirloin roast that was carefully cubed and seared in olive oil. Instead of trying to recreate my dad’s stew, I gave myself a new challenge: could I make a great beef stew using only natural, organic ingredients—no flavor packets, no Worcestershire sauce, no 60’s artificial anything? Yep, I could, using my slow cooker and some fabulous homemade bone broth. And so can you, so keep reading.

Note that the prep time includes the browning time for the meat. If your stew broth is not getting as thick as you would like near the last hour, you can try turning up the temperature on your cooker, if it allows you that option.

The only slight concession I might have made to “au naturel” was the addition of balsamic vinegar (which is still pretty darn natural) and cornstarch. I needed a thickener, and I wanted some acid to pop the flavor. Well worth it. I served up the stew in big bowls with homemade bread, but no Minute Rice. And, I think my dad would have approved. To make sure your stew turns out just as good as mine, here are some tips on getting “into a stew” over this holiday season. 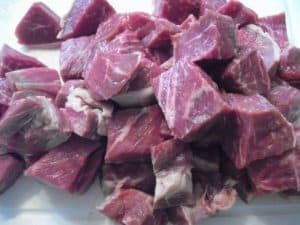 Uniform pieces will help everything cook evenly. Cutting up your own stew meat from a lean roast puts more control in your hands and usually means better meat. 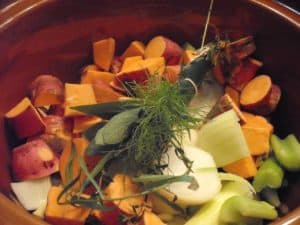 Your vegetables will do better starting on the bottom of the cooker. The meat will go on top and flavor everything as it slow cooks.

Happy Thanksgiving from Green Gal of the Midwest.

May warm sweet memories be your only “additives” this year.