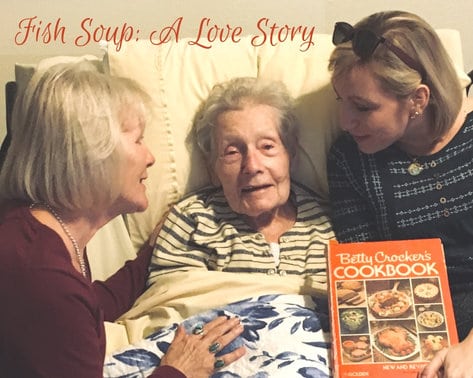 My friend Teresa Kennedy makes the best fish soup I have ever tasted, hands down. It is the dish always requested when our group of friends (That would be the Mermaids, BTW.) gets together for food, fun and frolic. Her fish soup is rich, balanced and comforting, not to mention highly nutritious. Now Teresa is a terrific cook, so it is possible that this soup is everyone’s favorite because of her mastery of culinary techniques and her inspired intuition, but when you get to the bottom of the pot, there’s quite a bit more magic in this recipe than meets the mouth. It begins and ends with love—and Betty Crocker!

“The Betty Crocker’s Cookbook (New and Revised Edition, 1978) was a gift from my mom,” explained Teresa.  “It was not a special occasion; she gave it to me because I needed it,” she said, smiling.  “I was 26, out of college, teaching, and living in an apartment.  I had started cooking for my friends, and I called my mother all the time!  I asked her questions about how to roast, stew, cook….I probably even asked her how long she boiled her eggs.  She was a great cook, and I always helped her in the kitchen.”

Teresa’s mom, Esther E. Luechtefeld, was born on July 22, 1922. Esther’s father, Harry, was a blacksmith and her mother, Alvina, was another talented mother, cook and gardener, Teresa recalled. So The Betty Crocker’s Cookbook that Esther gave to Teresa was more than motherly advice; the gift was part of her family’s kitchen traditions. “But for [my mom’s] best recipes, she rarely used measuring cups or spoons,” said Teresa.  “Her spices ﬂowed freely (even over the countertops),” making motherly advice somewhat of a challenge, but empowering, as well.

“When she gave me the cookbook, she said it was full of good basic recipes.  And that after cooking with these recipes for a while, I would just know how to cook…  I would not have to measure… I would feel free to substitute ingredients and to combine ingredients on my own.  She gave me conﬁdence!”

In the late 1970’s, her parents took Teresa and her brothers to the riverboat restaurant The Robert E. Lee on the St. Louis Riverfront. “We all ordered their bouillabaisse, which was delicious,” she said.  “So, I decided to attempt Betty Crocker’s recipe.  My folks were impressed.  My father bragged about it, and my mom just smiled at me.” 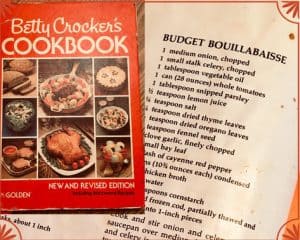 You can find Budget Bouillabaisse on p.78 in the Betty Crocker’s Cookbook, which, by the way, Teresa still owns (note the photo). The recipe became one of her family’s favorites. “Through the years, I have tweaked that recipe, experimenting with different ﬁsh, adding mini peppers, adjusting the spices, and touching it off with my friend Toni’s (Hey, that’s me!) Harissa.  My mom gave me the conﬁdence to do that,” said Teresa. “Buy good quality ingredients, cook what your loved ones want, and season at will.” Ahhh….The bravery and brilliance in Teresa’s kitchen simmers with mother-daughter love.

Of all those years of cooking with her mom, Teresa will tell you that she always remembers Thanksgiving in her mom’s kitchen as a favorite time of year. She was her mom’s sou chef much of the time and always helped with the making of a very special dressing/stuffing. “The recipe for the dressing was Alvina’s, never written out, just passed down from one loving mother to another.”

Her most vivid Thanksgiving—and most challenging—was in 1963, when her mother had undergone a major surgery just before the holiday. “I got to stay home from school all that week to take care of her.  I will never forget the date,” Teresa said, “because we were saddened by John F. Kennedy’s assassination.”

At the tender age of eleven Teresa was not used to taking on the responsibility of preparing a holiday meal for her brothers and her dad, who had to work all day (Teresa’s dad was a farmer.). But her mother couldn’t be on her feet. “So she talked me though making the Thanksgiving dinner from the living room couch,” Teresa recalled.  “I ran back and forth with a million questions all day long.  Dinner was three hours late, but it was enjoyed by all, thanks to mom’s patience and wisdom.  By the way,” she added, “we had no cookbook, no written recipes; mother just recalled from memory our family recipes and instructions.”

Of course, Teresa has handed the Budget Bouillabaisse recipe down to her own daughter, Hilary, as the family traditions continue. “It has pleased me to watch my daughter in the kitchen.  She has learned a lot while helping her grandmother, as well,” Teresa smiled. “I love that Hilary has taken an interest in growing her own vegetables and fruit–an interest shared by four generations in our family.” That would be Alvina (Teresa’s grandmother), Esther (Teresa’s mother), Teresa herself, and now Hilary.

“Hilary’s makes her own pasta sauce, which is a variation of mine and my mom’s.  It’s awesome, and it’s totally hers because of her garden-fresh tomatoes, oregano rosemary, thyme, and basil, with hot peppers, which she adds for her husband. Of course, a dash of Toni’s Harissa makes it into HER pasta sauce too! (Aw shucks.).”

And now, Teresa has agreed to share the famous Budget Bouillabaisse with all of us. Of course, she expects that over time we will tweak and taste and add and on and on. Ladles up!

Serving Size: about one cup 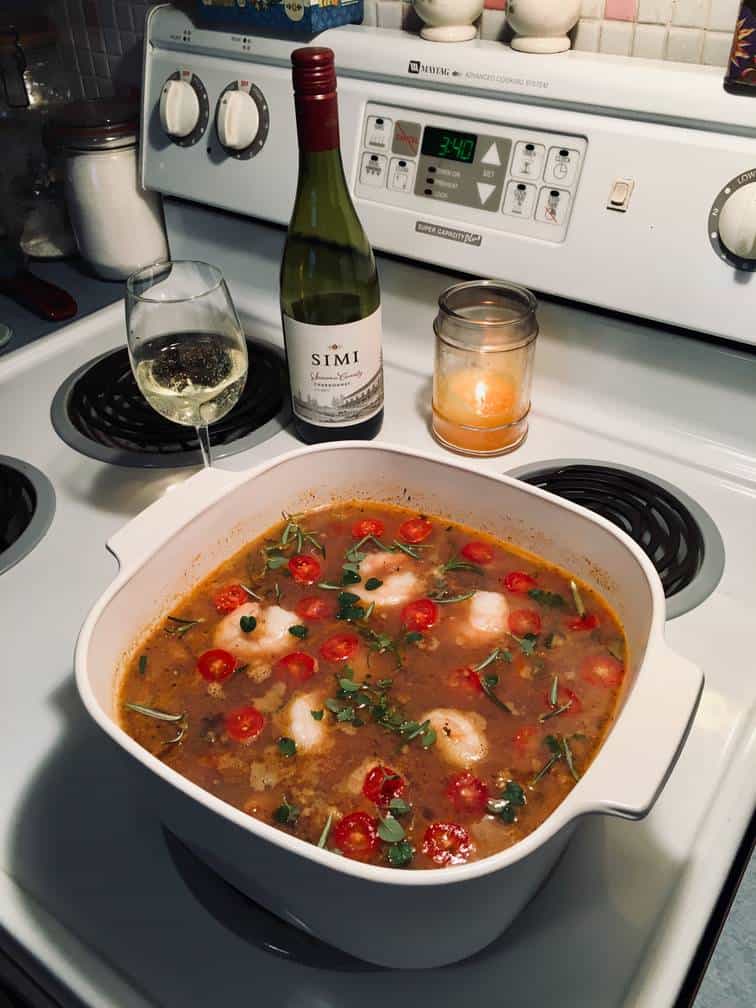 For Teresa—as for many of us–her best memories of family and home revolve around her mom’s kitchen table. “Mother used to joke that it didn’t matter what the rest of the house looked like because no one ever left her kitchen table.  That’s a great cook!

“Mother has dementia now, I miss her cooking, I miss asking for her advice…not just about cooking—but about life.  Although conversations are difﬁcult, I always tell her that I love her and she replies ‘I know you do and I love you too!’  I am blessed with a great mom and daughter and wonderful husband and son-in-law, as well.”

The food of life… it just can’t get much richer than this. Who’s at your kitchen table these days? 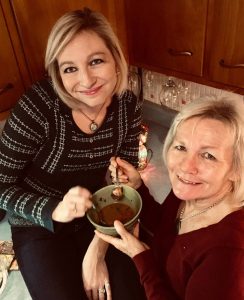 This Green Gal post is dedicated to the memory of Esther E. Luechtefeld (1922-2019) who has recently flown to Heaven’s kitchen. She is missed and loved by all who knew her. Especially by those who had the pleasure of sitting at her kitchen table.