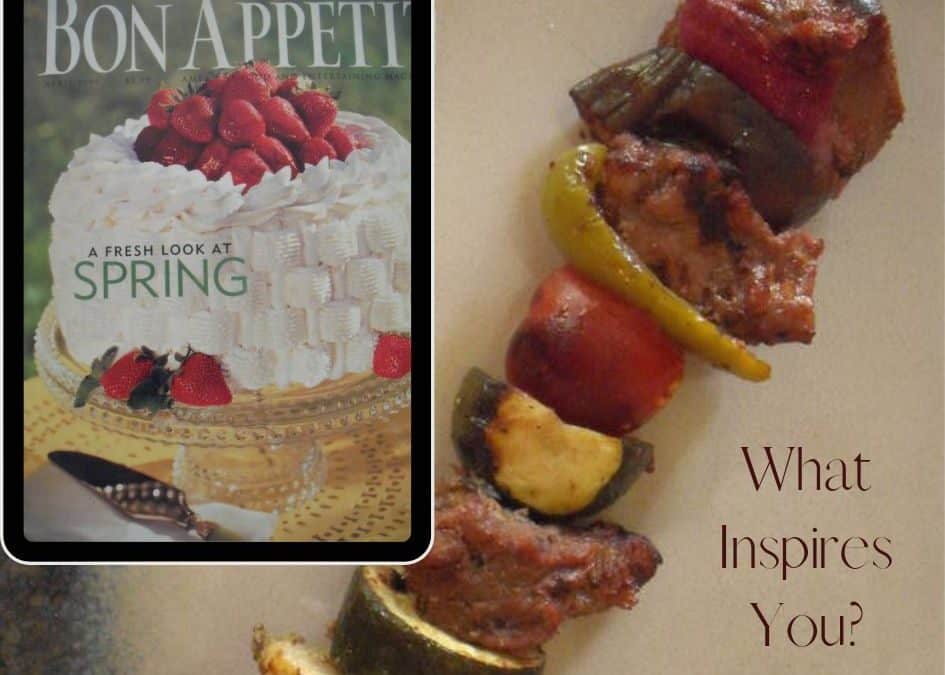 One of the most important things to note about women is their innate sense of community and sharing, in my opinion. If we were all more about community, sharing and caring, wouldn’t we be better off? One of my biggest takeaways from gender studies classes in college came from a researcher named Carol Gilligan, who is known for a number of groundbreaking feminist books, particularly for me, the book In a Different Voice.

In this book, Gilligan challenges the theory of a well-known, respected male psychologist who published a theory on human “stages of moral/social development,” where he concludes girls stop developing at a much lower stage than boys. Why? Well, without going too far into the weeds here, boys in the study described themselves consistently as independent beings with lots of “I” statements. Girls, on the other hand, defined themselves in terms of their relationships—daughter, mother, wife, friend, etc.

So two things: first how girls are “taught by society” to see themselves as opposed to how boys are “taught to see themselves” was never considered, and secondly “relationships” and “community connections” were deemed less important to moral development than an independent, mostly self-serving view.

Ok. So where am I going with this and when are we going to put the kabobs on the grill? Well, it is about the inspiration for this dish, which came from a dear and caring friend. Pat Rosso started out in my life as just one of my dad’s girlfriends—those women who came and went through a proverbial revolving door during my formative years. But Pat was different: she’d sit and talk with me, ask me (meaning she actually wanted to know about me and not just impress my dad) how my life was going, what I was interested in, did I have a new piece of writing to share.

And when—inevitably—Pat and my dad became “just friends,” she didn’t disappear. She regularly took me and my grandma to lunch, came to dinner at my house once I had a house of my own, and always supported everything I did, even when everything I did didn’t necessarily merit supporting. She was a “mother” in many ways, a sister in many other ways and a dear, dear friend always. She was stuck somewhere on that psychologist’s scale below men and boys—somewhere Gilligan thought maybe we all should be in a truly moral world.

And so this inspiration she gave me came from a gift she bestowed when I was a young wife and mother (Ah, you can tell I’m female just be my self-defining terms—and a snarky female at that.). For my birthday one year, a subscription to Bon Appétit Magazine appeared, and my kitchen was never quite the same. This magazine marked my first journey beyond my grandma’s recipes and into the international world of food, five-star restaurants and some highly technical culinary techniques.

The magazine hit a chord inside me: all this “culinary” stuff was cool, and I wanted to learn more…lots more. So I renewed my subscription for nearly 10 years. And, yes, I still have the entire collection in a cupboard in the dining room, tattered to be sure, but still functional, still enormous fun to go through—especially at the holidays—and still used on a fairly regular basis.

Among my go-to favorite recipes is the one I’m sharing here for a lamb marinade, from an April 1999 issue of Bon Appétit. In the article, the recipe is prepared for a party platter of lamb chops, but over time I’ve used it for several lamb cuts, including the dish below that turns a boneless leg of lamb into lean, tender kabob chunks. And because I’m now vegetarian, I use half the marinade for vegetables. It’s a great summer grilled dinner that is little on prep and long on flavor. Be inspired and light that grill! I can’t wait to share it with you…female that I am.

Serving Size: 1 kabob with everything

For the Marinade
For the Lamb & Veggies

Note that the prep time does not include the marinating time, just the time it takes to chop up the lamb and vegetables and make the marinade.

If you prefer to do this as grilled lamb chops and vegetables without the skewers, the recipe accommodates about 12 chops with the above amount of vegetables. If you are only marinating lamb chops, you can get about 24 small chops from this recipe. 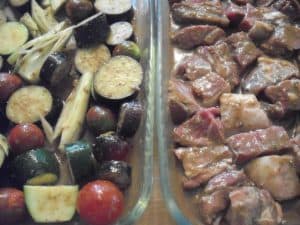 Well, you know this recipe isn’t exactly how it appeared in Bon Appétit. There is the switch in lamb cuts for one thing. And, BTW, the lamb is from my local Shepherd’s Wife farm.

There’s also the addition of all those vegetables because, well, I like to enjoy the marinade, too. The photo to the left shows how I keep these two foods separate during the marinating process so that everyone has a seat at the table.

But I sort of played around with the marinade just a bit, too. For some reason there was no garlic in the original directions. I just figured misprint. And I also added the rosemary, along with the suggestion of the four-pepper blend, which I crush rather than grind. But overall, it’s the recipe that first inspired me to cook with lamb. We’d never had it up to this point. And when I was still a meat eater, Don and I fought over those chops. So make sure you prepare the full recipe because it’s a time-tested winner.

If you are looking for other lamb-inspired dishes, see my recipes for Shepherd’s Pie and Roast Leg of Lamb with Yogurt-Tahini Sauce.