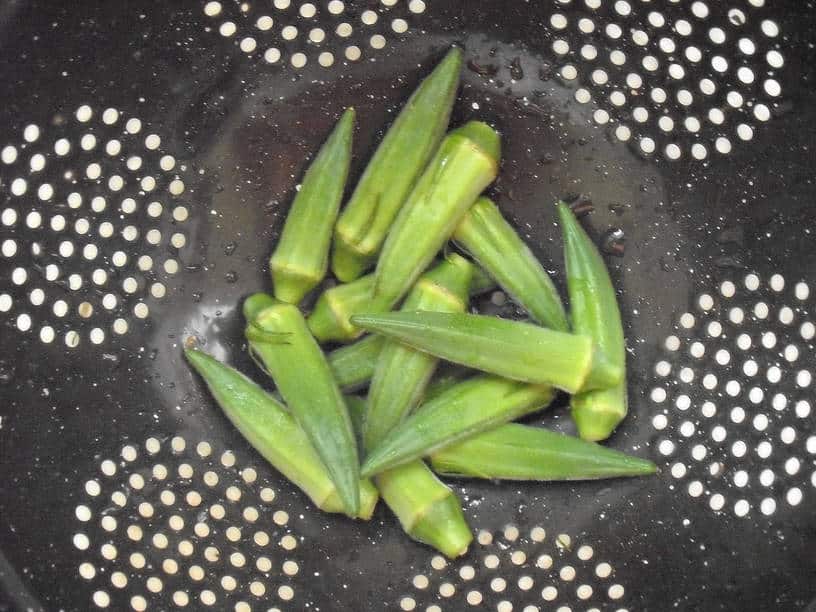 Here we are at the very end of the market season. The Land of Goshen Community Market held its final market day on October 15; other local farmer’s markets will follow suit in a couple of weeks or so. Hugs, kisses, tears and best wishes for the coming winter abounded on our last day. Community. It is what I will miss most about the market over the winter. But I couldn’t let the season end without an act of bravery; I finally started cooking with okra (a vegetable I have avoided for years) during the final market countdown and landed on three recipes: two are passable and one was a standout.

Here’s the thing that always comes up when you talk about okra: slime. Even people who absolutely LOVE it, talk about the slime, sometimes with fondness, sometimes with disdain. But slime always enters the conversation, even when the goal is to dismiss it.

In reality, there is much more to okra than slime: Okra is a vegetable that has traveled through history and across continents, has woven its flavor into many cultures, has played a significant role in the sad story of slavery, and remains a staple ingredient in regional cooking in the United States.

It’s worth investigation, especially if you are new to it, as I am. That’s why I’d like to recommend a very accomplished blogger: Tory Avey, who not only develops recipes, but leads a team of food historians, chefs and other creative people to provide a holistic experience in food, culture and cooking. The article on Okra, written by Michael W. Twitty, is exemplary and includes a recipe that I will be trying at some point. Subscribe on Tori’s homepage and receive weekly recipes by email!

Okra is more than culturally rich; its contains a wealth of nutrients:  vitamin A, folates, vitamin C, B-complex vitamins and vitamin K. What’s not to love? Well… slime.

In a way, my interpretations of okra aren’t really recipes; they’re techniques. And all of them are aimed at eliminating slime. So if you are fond of the gelatinous trademark quality of this vegetable, maybe not for you. However, if like me, you are newly trying to appreciate this historically significant, local-grown, good-for-you vegetable, you might want to give these a try. Okra?… I mean, Okay?

Ranked from third to first place, here are the results of my private okra cooking contest: 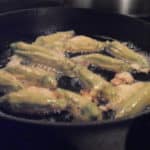 okra poppers in the skillet

One of my market friends had mentioned that she never cuts the okra open before cooking it. Cooking it whole, according to my friend, means no slime. Well, less slime, I think, but it was still there in the end. Not bad, though. My company and I ate a plateful one night at dinner. 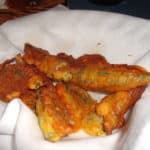 Okra poppers were “OK.” Really, I think I will try them again with more seasoning and a bit more oil in the skillet.

It was the cute little shape of okra that made me think of poppers. (Okra are also called “Lady Fingers” because of their shape.) So I created a thin egg batter, much as you would for tempura: some flour (I used spelt.), an egg and some almond milk, seasoned with Harissa (or any hot chili sauce you like). I dredged the okra in a little coconut flour so the batter would stick better, then gave them a healthy dip and carefully placed them in my cast iron skillet, in which I’d melted about a half cup of coconut oil (Looking back, I could have been more generous with both the oil and Harissa, I think.) I let them fry until they were golden all around and started to float; then, I let them drain on paper towels a few minutes. 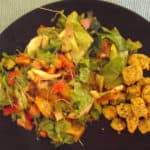 The okra croutons on the right added crunch and a tangy-sweet taste to our salad. Gluten-free!

Okra croutons were a little more interesting. Another market friend swore that the secret to eliminating slime was to wash and chop your okra and soak it for about 20 minutes in apple cider vinegar. She confidently stated that the slime would disappear. Well… no.

In fact, when I drained my chopped okra the liquid had become so slimy and thick that it barely went through the colander. Refusing to be defeated, I just kept going in the hopes of creating a gluten-free okra crouton my daughter could eat. And you know? They were pretty darn good.

Once the okra had drained, I tossed it in a beaten egg and dredged it through seasoned cornmeal. Then, I fried them as before in about two inches of coconut oil in my cast iron skillet.

I really think the smaller pieces performed better than the whole okra above, despite the frightening slime at the start. They came out super crispy, with a tangy under-note from the vinegar that played really well with the natural sweetness of the okra. We’ll definitely have these again. 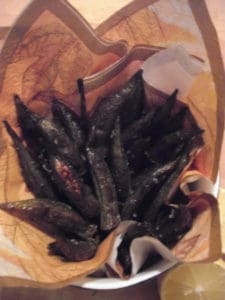 Roasted okra was the big winner in my house. We could have nibbled on it all night long.

Ah. The winner. And the EASIEST recipe of the three. How often does that happen?

I actually made these twice, using two suggested methods. The first time, I set the oven to 500 degrees, tossed my washed, whole okra in olive oil and coarse sea salt and stuck it in the oven for 15 minutes. At the 15 minute mark, I decreased the oven temperature to 300 and let them continue for another 45 minutes.

For method two, I coated my okra in olive oil and salt as before. But this time, I set the oven to 450 degrees and forgot about them for the better part of an hour (Well, I did check halfway through and give them a bit of a stir.).

What I got was a crispy little bite-size snack, totally without slime but full of great, slightly sweet okra flavor! Really yummy and very nice as an appetizer at dinner. Further, I prefer the second method to the first—even easier!! Win, win.

So this is where I am with okra… and where I am is OK! I plan to become much more adventurous next season. My friend wants to pickle some, so we’ll see.

In the meantime, if you’ve frozen some okra you might want to take a peek at this celebration dish at Delicious Living Magazine. Yassa is a “slow-cooked chicken casserole… served at weddings, initiations, and other tribal gatherings by the Senegalese people of Equatorial Africa.” Okra is a star ingredient. What a great alternative to the Thanksgiving turkey, if you are wanting to spread your culinary wings this holiday season. I think serving Yassa and enriching the dinner table conversation with interesting multicultural food stories is a perfect way to put meaning and community back where it belongs—at the center of the celebration.

Hey, I know it’s been a while getting this post up. Doing a little maintenance to make sure Green Gal continues. Many thanks to Debbie Ward who holds my hand through every little crisis and to Zaid Shaikh, the most accomplished web technician I’ve ever met. If you are looking for web development and help, leave a comment. I’ll connect you.