In a Pickle! Learning to Can with Lony Less 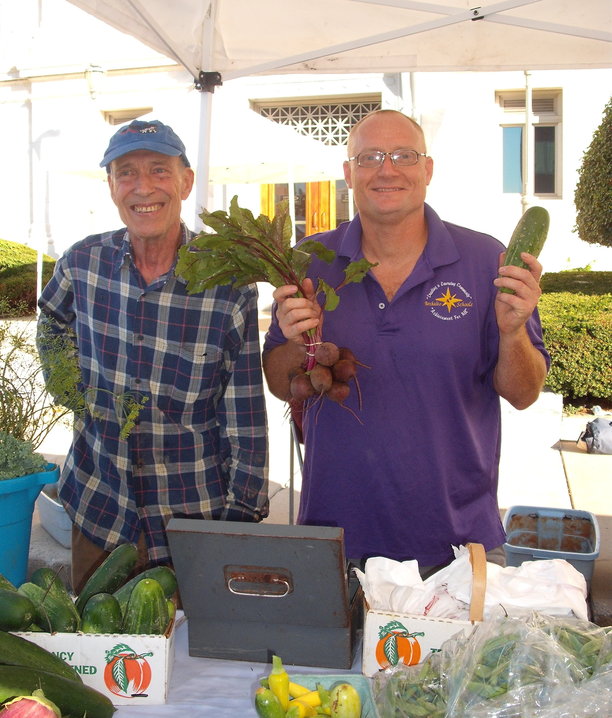 Well, yes I can… can… under very guided, expert help, that is. Last week I spent an entire morning in the kitchen of Lony Less, one of my market-vendor friends who has been canning, drying and preserving his own produce for years. It was a pretty amazing and humbling experience.

From his small backyard garden and space-challenged galley kitchen, Lony manages to turn out pickles, pie fillings, condiments, pesto, beets and sundried tomatoes. Enough for himself, his local customers and his many friends. If you are on his gift list, you are truly a lucky green gal or guy. 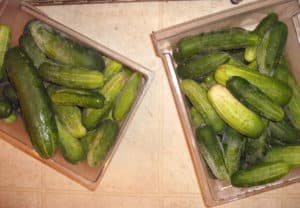 Last week, a combined abundance of cucumbers from Lony’s garden, his market colleague Bob Grinstead’s garden and one anonymous donor had Lony (and lucky little me) in a pickle… literally, of course. And, as we began our morning, I realized two things right off the bat:

For our pickles, we were using what is called a water-bath method, a process in which the jars, lids and rings are heated to a temperature that destroys microorganisms and inactivates enzymes. Further, the pickles swim in a vinegary, high-acid brine that will create its own barrier to bacteria. So once they are tightly sealed in their sterilized jars and processed in boiling water for about 10-15 minutes, they’ll be ready when we are—fall, winter and even next spring (if they don’t simply fly off the shelves!). 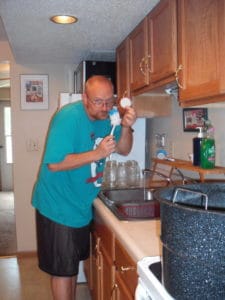 Lony is a (kind) taskmaster and cleanliness is his first rule.

Above all, cleanliness is the highest priority. We thoroughly washed and rinsed all surfaces and all cooking and canning equipment, from pots, to rings and lids, to jars, to funnel. Everything was allowed to air-dry on clean kitchen towels. From Lony: “cold water rinses cleaner than hot, so wash in hot and rinse in cold.” Apparently soap is not a desirable flavor in pickles. Who knew?

In his amazingly small kitchen, Lony begins the actual canning process by getting three large pots boiling on his stove: the largest one contains the rack that keeps the jars upright and stable and is filled with water that must reach a rolling boil to sterilize the jars in approximately 10 minutes of intense heat; the next pot in line contains water that will be boiled to sterilize the rings and lids; and the final pot will hold the brine (one quart white vinegar, one-half cup Kosher salt and three-quarters cup sugar) that will be brought to a boil and eventually poured over the cucumbers to create the pickles. Lony’s preferred jars, by the way, that are the regular size quart jars, as opposed to the wide-mouth variety. He believes the narrower jars allow you to cram a lot of produce into a shelf-saving space and create a tighter, more reliable seal in the end than wide-mouth jars. Nice tips. 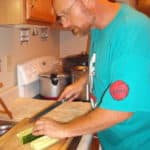 Lony can slice and trim with lightening speed. Here he is slicing Brittany’s. Smile.

Once the pots are on their way, Lony preps his cucumbers. Here is where I came in (at least a little) handy, since I can slice and seed. Lony works a whole lot faster than I, just let me say. And quicker than I would ever have imagined, we had a huge bowl of cucumber spears (which Lony lovingly refers to as Brittanys–sigh), a bowl of small-size whole cucumbers with trimmed ends, and another small bowl of cucumber chips (Again, Lony has a pet name for these: Ponch and John—which is a reference you will never get unless you are a certain age and watched the TV show “Chips.” Just saying.). 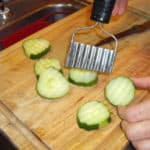 So this is how little pickle chips are made! Who knew! 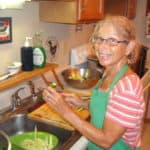 I felt pretty slow up against lightening-fast Lony, but I tried to do my share of slicing.

Finally, we set up the spice station: peeled whole cloves of garlic, little bowls of whole mustard seed and black peppercorns, a bowl of dill seeds and stems and a few whole sticks of cinnamon for those people with a streak of real green gal bravery.

Now, it was time for the little green gal to learn THE SYSTEM. Because time is of the essence here—the longer things sit around the more opportunity for bacteria to infiltrate—we had to move quickly. A jar was taken (CAREFULLY by tongs) from the water bath, the special canning funnel placed atop, seasons added, funnel removed, cucumbers added—each jar contained one to two whole, multiple spears, and was topped with chips—funnel replaced and brine poured in to the “exact” depth, which I miscalculated more than once. Each jar was filled and sealed in less than a couple minutes with Lony at the helm. Not kidding.

As we got to the last step—the processing of the pickles in the water bath to make sure nothing other than robust, fabulous flavor could survive–I realized I‘d pretty much made it through. My last challenge was taking the tongs, lifting the hot jars from the boiling water and making my way (Remember, the kitchen is small with little counter space.) all the way into the living room dining area where a clean thick towel waited for the steaming jars. Yes, I was scared. But, no, it didn’t stop me. 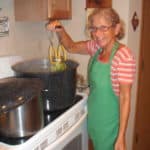 That confident little smile I’m wearing does not exactly reflect how I was feeling.

As long as I was able to place them gently on the towel at least a couple inches apart and keep my little hands off of them, I’d made it. Yes! The pickles actually need to remain untouched by any hands for 24 hours just to be safe. Then, Lony will label each jar with its contents and date and store for at least a few weeks before enjoying the fruits of his labors. 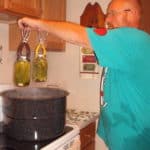 Lony is a real pro at two-handed pickle jar transfer. Show off.

Final Exam: The Pleasure of the Pickle Ping

And still, there was a final moment of truth—the real test of success—the pass/fail. At this point in the process, all canners sit quietly and patiently waiting for the “pleasure of the ping.” As the lids finalize their seals, they create a little bump in the center, and when they are successfully and safely sealed they decompress with a delightful little “ping.” Every time a jar lid pings, an angel gets its wings… remember that? Yeah, well…. 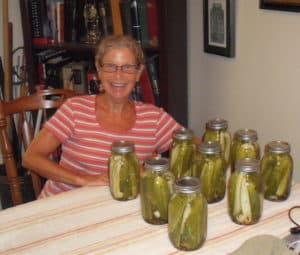 What a happy green gal! Experiencing the pleasure of the ping!

To be honest as I stood there for most of the morning, I felt sort of helpless. But Lony is incredibly patient and pulled me right into the action, giving me an opportunity to fail and succeed at each step without fear. I figure I passed, but maybe not Dean’s List material just yet. So, I’ll definitely sign up again… can you say sauerkraut? 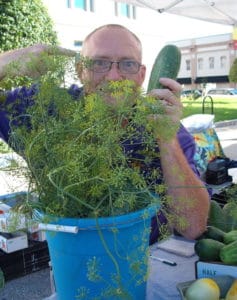 While canning and preserving are excellent green-friendly ways to eat local and healthy all year, the plentiful array of produce we enjoy in our kitchens at this time of the year can present its share of storage challenges. Just as a stray microorganism can spoil the pickle jar, the naturally odorless, harmless and tasteless gas called ethylene can destroy our market goodies right before our eyes…. unless, of course, we follow Judy’s sage advice and mindfully store those fruits and veggies that produce ethylene in abundance away from those that are very sensitive to its power.

Ever needed to ripen a banana for bread or an avocado for guacamole? Stick them in a paper bag with an apple, and in a short while, you’ve got what you need. However, if your goal is keep your produce around all week, creating this pairing is not such a good idea. Here’s a handy list of produce that creates ethylene gas with abandon and another list of produce that should be stored separately from the first list…. unless of course your whipping up guacamole and mixing margaritas. (In that case, be sure to call me.)