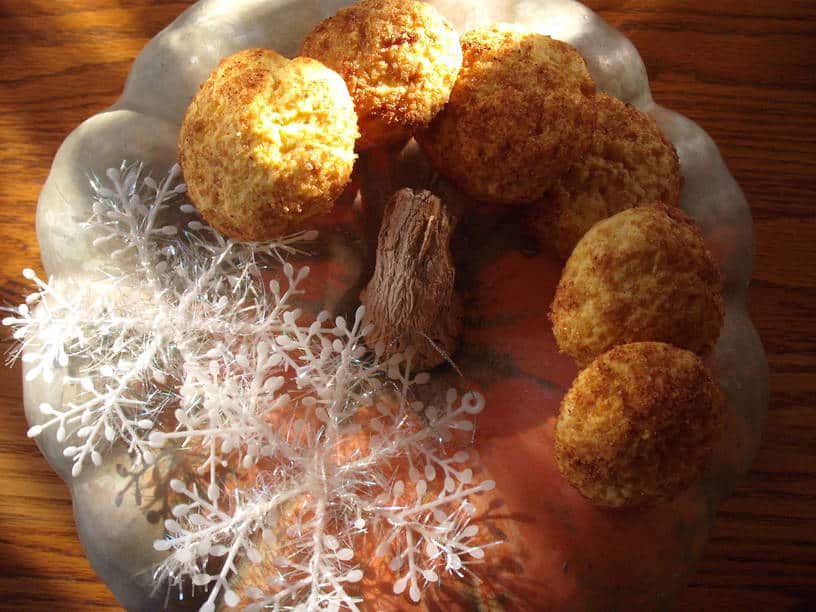 Well, I had to do something will all those pumpkins I collected over the fall, so it seemed impossible not to include a pumpkin cookie. I decided to retool a recipe from last year—turning my Old Fashioned Persimmon Snickerdoodles into Pumpkin Pie Snickerdoodles. Pumpkins are, on average, easier to come by than true native persimmons, so if the persimmon recipe was too far up the tree to reach last year, maybe this will lower the branch a bit for you. In essence, I simply switched out the persimmon pulp for the pumpkin puree, made adjustments to the flour and divided up the four teaspoons of cinnamon in the original recipe to create pumpkin pie spices. You may even use quality canned pumpkin for this recipe, if you must. Easy Peasy.

Note that the prep time does not include the time it takes to chill your dough, only the time it takes to prepare it. The bake time estimates the maximum time it will take to bake all four and a half dozen. To ensure that your dough is not too wet, be sure to drain your pumpkin very well, even if you are using canned pumpkin. You can place the pumpkin puree in a cheesecloth-lined colander over a bowl in the frig overnight to accomplish this.

Alas, unlike my Raspberry & Pecan Thumbprint Cookies, the Pumpkin Pie Snickerdoodles are not gluten-free. However, your gluten-free diners can satisfy their pumpkin cravings this Christmas with my Pistachio Encrusted Pumpkin Wedges and the Creamy Pumpkin Bars with Orange-Oat Crust from the great folks at Delicious Living Magazine. Both are destined for my holiday table. Maybe your,s too?

And I must give a big shout of gratitude to CSA friend Liz, whose kind thoughts and culinary wisdom helped me perfect this snickerdoodle. Thanks, Liz! You nailed the adjustments that gave my cookie a much better texture—all in the leavening and flour choices. You can’t underestimate the value of good friends who just happen to be great cooks.