Pumpkins for Dinner and Dessert 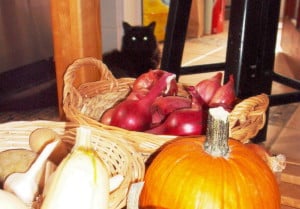 Well, OK. There is one little goblin still hanging around my pumpkins–our kitty, Bear.

Now that the ghosts and goblins have flown for another year, my pumpkins have been pulled in off the porch and earmarked for bigger and better things: soup, bread, pie and pudding. Yet, as I look down my street, I can’t help but lament and lust for the little orange beauties that sit on my neighbors’ porches–most destined for the compost (at best) or the garbage (at worst). While some folks have “clued in” to how easy it is to fix pumpkin and how good fresh tastes over canned—especially those little sugar pie pumpkins—most still view them merely as decoration—a canvas for a scary face or a prop for the family fall photo.

In an effort to encourage a better use of pumpkins everywhere, I’m offering two of our family favorites—Pumpkin and Black Bean Soup and Classic Pumpkin Bread. If you look at the recipes and STILL don’t think you’ll make a pumpkin dish from scratch, you can use canned pumpkin and consider just splitting and tossing your fresh pumpkins to the back of your yard where squirrels, deer, birds and other hungry critters can nibble with delight. 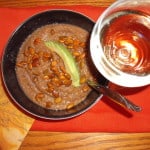 We’ve had much-needed rain this week, but it left our days dreary and damp. So to bring back the warmth we made Pumpkin and Black Bean Soup. It’s easier to start this dish the day before—preparing the pumpkin and beans ahead; then, the rest is a breeze.

What You Will Need:

Heat the oil in a large pot. Add the whole cumin seeds and simmer as the oil heats up.

Add the onion, garlic and salt. Cook on low until onions and garlic are browned.

Add the ground cumin, cinnamon and allspice. Give it all a stir. 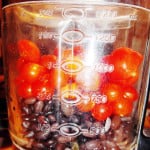 Puree the beans and tomatoes with half of the vegetable broth. I find a blender is the best way to do this. Add pureed ingredients, pumpkin and the rest of the broth to the pot. 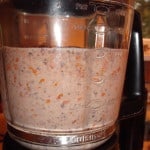 Puree until you get a fairly smooth consistency.

Simmer uncovered until thick, about 40-45 minutes. Before serving, stir in balsamic vinegar and season with fresh black pepper.

Serve with toasted pumpkin seeds and avocado, if you wish.

Want it extra spicy? You could always add a fresh hot pepper, a dash of Harissa or a high-end chili powder. Be brave and creative!

The best part of using fresh pumpkin is that you almost always end up with a little more than you need for one recipe. So I took my extra pumpkin and whipped up our all-time favorite pumpkin bread from The Joy of Cooking. I’ve never found a better recipe than this one—and, believe me, I’ve tried plenty. This one became the hands-down winner when I decided to use up a little extra organic buttermilk for the amount of milk in the recipe. O-M-G. This bread bakes beautifully and freezes to perfection; I always double it, if I can. 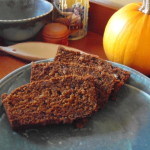 Classic Pumpkin Bread from The Joy of Cooking

Preheat your oven to 350 degrees and have all your ingredients at room temperature. Grease one 9 x 5 standard loaf pan.

Combine in another bowl:

In a large bowl: 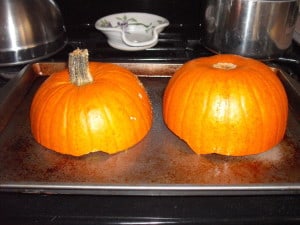 Here’s another way to roast a pumpkin: split in half, scrape out the seeds and roast at 375 degrees for about 45 minutes. A great option for larger squash.