Seconds Please! Abundance, Beauty and Putting Up with Winter 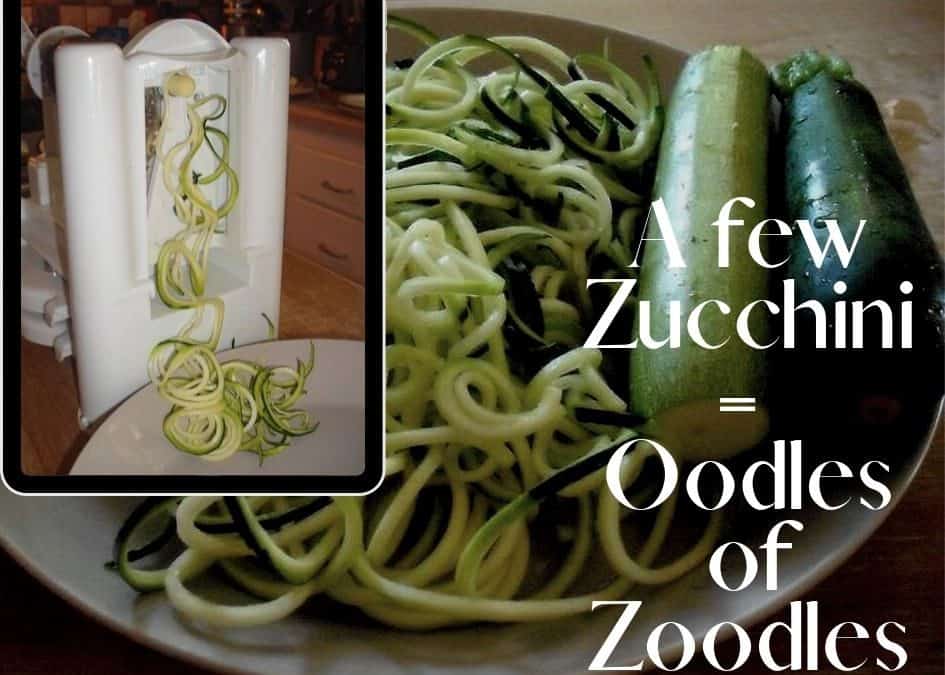 Autumn is the season of BIG harvest. It’s as if Nature put on a fireworks display all summer and September and October mark the grand finale, when the world is literally lit up with abundance. All the winter squash is coming in by the wagonloads at my market, while the end-of-the-summer produce makes one last HUGE BOOM. And the question becomes: “What do we do with the wealth?” Waste not, want not. Here are a few ideas to move us in smooth, non-wasteful ways into Autumn.

Let’s start with zucchini, that wonderful summer squash that you’ve had just a little too much of lately, right? It really kicks up on some farms near the beginning of fall, so rather than letting it “go to the chickens” let’s think about a new recipe that will use up oodles of zoodles! And inspiration credit goes to my good, much-missed friends Christine and Gary, who bequeathed to me their Spiralizer (with three different blades!!) when they moved back home to Arizona last year.

Yield: 4 servings, unless this is a side dish, then 6

Serving Size: about a cup and a half of zoodles

The Zen of the Zoodle

Here are a few tips on making this salad your own. Since zucchini itself is rather bland, I made a point of including ingredients that would pop the palate. Hence the jalopeño, ginger, garlic and poblanos. If, however, that’s a bit too much pop for you, replace the poblanos with sweet bell peppers—red would be especially good, I think—and reduce or even eliminate the hot pepper in the dressing, replacing with a pinch of cayenne or something milder.

And don’t let the short list of salad ingredients stop you from adding on. We complimented our salad with fresh-sliced heirloom tomatoes, hard-cooked eggs and—of course—Don thought bacon was necessary. Whatcha gonna do? I highly recommend keeping those little toasted pumpkin seeds—just toss with about a tablespoon of oil and a teaspoon of salt, put on parchment paper and toast at 350 degrees for about 10 minutes. Just the right crunch. 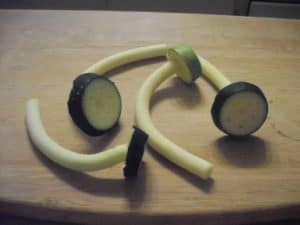 So what are these? Mushrooms from Mars? Nope, they are the inner core of the zucchini you zoodled. And don’t you dare pitch them! They are yummy. What kid wouldn’t love zucchini straws in her lunch? Or do what we did, chop up, sauté and serve with scrambled eggs or whatever. 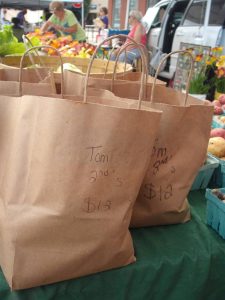 Coming back now to those heirloom tomatoes—it’s their last hurrah, too. In a month, they will be gone until next summer. Don’t even THINK about buying out of season from the local grocery giant. You’ll just be wasting your money. Here is my plan: I will be buying up bags and bags what my farmers call “seconds” or “farmer grade” tomatoes, that are just not supermodels in the world of produce—split skins, black spots, critter holes and hard centers. But if you are willing to carefully wash, trim and peel a bit, you will have the tastiest bargain ever to hit your plate or freezer. Yes, I did say freezer. I buy several bargain bags, wash the lot, remove all the blemishes, chop into chunks and toss in freezer bags. I didn’t buy one can or jar of tomato sauce all last winter. And Oh, how fresh the taste… even in February when they are just the thing for your soups and stews and chilies!

But for today’s table, let’s keep our focus rather raw, since our zoodles are raw. My friend Sally Burgess—remember her amazing Protein Recovery Balls—has the best Raw Marinara Sauce ever. It’s another perfect way to compliment oodles of zoodles when you are seeking variety. So give it a try, and when you shop for those tomatoes, be sure to say “Seconds, please!”

Preparation: To make the Marinara, place all ingredients into a food processor and process until smooth.
Cannot get much simpler than this, is what I say. Sally says that a few red pepper flakes add a nice zing. To that thought, I’ll suggest a half-teaspoon of Harissa might be nice, or, if you’ve harvested all your basil this year, a tablespoon or two of your put-up pesto. It may be Autumn according to the calendar, but it’ll still be summer on your dinner plate!

Putting Up with Winter

Putting up with winter is sort of a negative outlook, I’ll admit. All seasons have beauty (I tell myself on cold January mornings), and gratitude should not be a seasonal frame of mind. But don’t you just long for the fresh crunch of produce in the bleak midwinter? I think I’ve got a solution for you…

Along with those farmer-grade tomatoes, you are likely to see the last (and not the best looking) cucumbers at the market. Especially if the weather gets hot and dry in September, there’s a bushel or two hanging around at fairly decent prices. They aren’t lookers, but, again, if you are willing to scrub and trim, you can end up like I do with about six packed cups from your friendly farmers.

So what do I do with all those cucumbers? Especially when I haven’t yet mastered pickling and canning? I freeze…as in the Amazing Freezer Pickle! And I take no credit for the following recipe. Rosi Biver, the matriarch of Biver Farm, gets all the accolades. And really, this is one of those amazing “can’t believe this works” recipes that everyone will love. Don’t forget, Rosi is the genius behind the Mock Apple Cobbler that’s made with zucchini and NO apples.

My daughter Heather insists on at least four jars of Freezer Pickles put up every winter as a favorite holiday treat. The plate is always empty when the meal is over. So… mandolines ready: 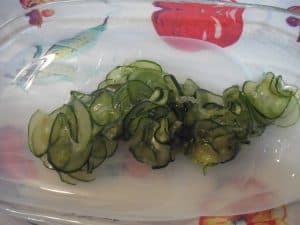 I know what you’re thinking: frozen cucumbers are going to be just a pile of mush. Well, that’s what I thought, and I was SO wrong. When you are ready to serve your freezer pickles, you’ll need to move them from the freezer to the refrigerator and allow them to thaw very slowly for a couple of days. At serving time, open the jar carefully and drain them in a colander, but don’t rinse. Just arrange them on a pretty serving dish and await the compliments, as people ask you with astonishment how in the world you brought the crispy and sweet cucumbers of summer to the winter feast.

In the end, it is Autumn, and Summer with all its unique blessings has faded with the sun, which sets earlier and earlier each day. That’s the best reason to not only savor the last few mouthfuls of Summer’s passing season but also to welcome in the fall festival of pumpkins, sturdy crucifers, crisp apples, juicy pears and earthy greens. To everything, turn, turn, turn.