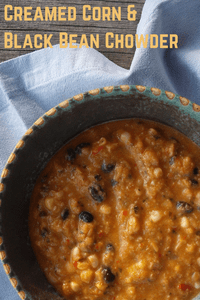 By February, I am continually taking stock of what is left in my freezer. The time has come to stop hoarding and start using. My freezer contents were the main inspiration behind this soup, but it was also a valentine for my sweetie. If you asked Don to name his favorite vegetable, he will say corn on the cob with no hesitation, despite the fact that corn is technically a grain and a fruit, as well as a vegetable. Bet you didn’t know that. Well, me neither until I found the information online. Lucky for Don, I had at least four large bags of corn kernels–whatever they are–ready to go for February 14.

My Creamed Corn and Black Bean Chowder used frozen corn kernels from last July, frozen red bell peppers from last August and frozen garlic scapes from last April. However, if your freezer doesn’t contain all these ingredients, no worries. Pick up some frozen organic corn from your grocer, splurge on two large fresh organic bell peppers—and green will also work here but will result in a slightly less sweet soup—and substitute regular garlic cloves for the scapes. And…not exaggerating a bit here….this was SO EASY to make and yields enough for a superb leftover—it only got better and spicier with age–sorta like my marriage. 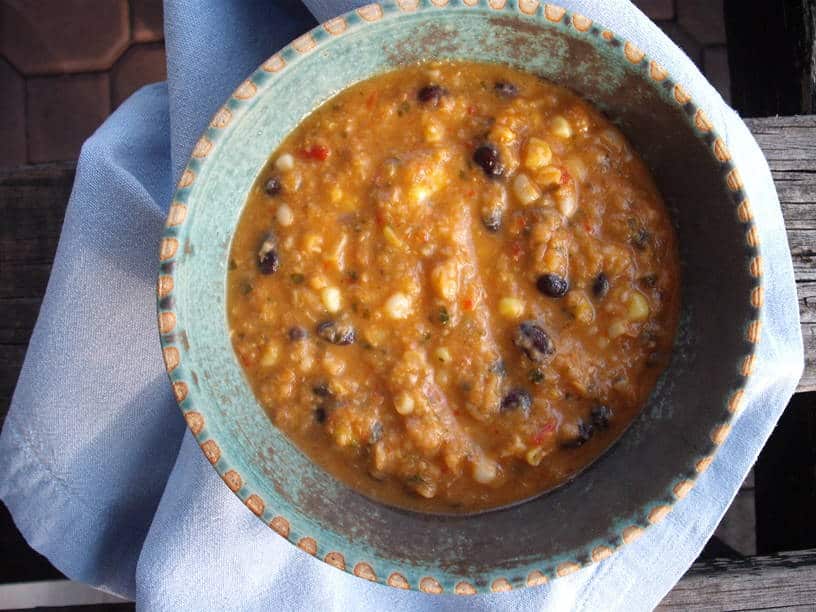 Note that prep time does not include presoaking and precooking your beans. While I really avoid food in cans whenever possible, you could use canned black beans, as long as they are drained and rinsed well.

My Creamed Corn and Black Bean Chowder turned out to be a vegan dish, but that’s not a rule written in stone, especially if your valentine is a meat eater. Don, for instance, topped his chowder with crumbled bacon, while I garnished mine with chopped avocado. And there’s no reason not to substitute whole organic milk or even half and half for the almond milk—almond milk was for me, Don’s vegetarian valentine. Further, I’m thinking that if I made this soup for a bunch of carnivores, I’d be tempted to include bacon fat while precooking the black beans and adding a Manchego cheese crumble for additional topping. Just a thought.