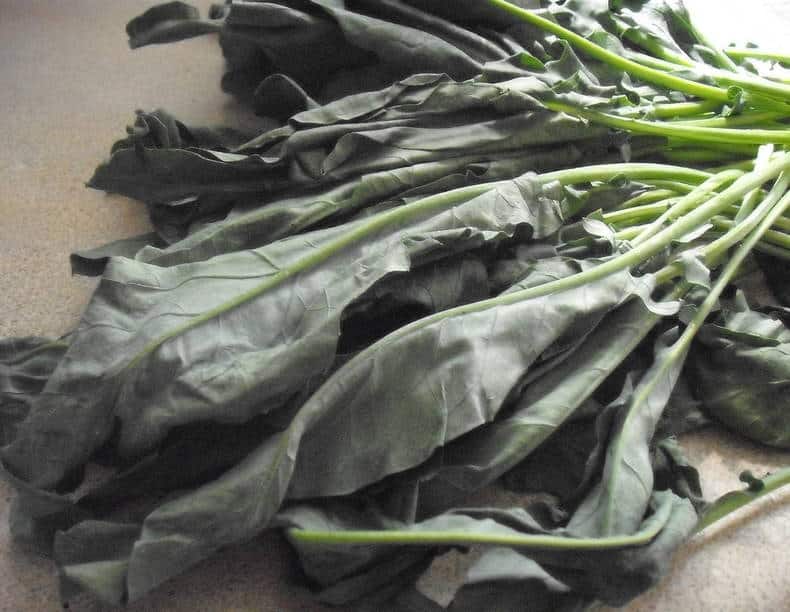 Spigarello. No, it is not Leonardo Da Vinci’s younger brother. No, it is not a minor character lurking in the background lyrics of Queen’s “Bohemian Rhapsody”. And, no, not a forgotten opera by Puccini.

Spigarello is an ancient green of Italian descent related to broccoli. It is all the rage, it seems, on the coasts—especially the West Coast in high-end restaurants. But it recently showed up at my farmers market, and I’m guessing you can probably find it at your local farmers market, too.

Spigarello is a sturdy plant that holds up to the extremes of Midwest weather. Its leaves are large and tender and the darkest green I’ve ever seen. According to the website Specialty Produce, “Spigarello broccoli is an heirloom variety considered to be the parent of broccoli rabe…. Its real name is Cima di Rapa, which translates to ‘turnip top’ but is also loosely translated to broccoli rabe.” Whatever you call it, Spigarello is a super green, loaded with vitamin A and C and potassium–even a little protein. The leaves are tender, slightly sweet and have none of the bitterness often present in other sturdy greens. It may be the new kale!

And in my house, it was dinner—a one-skillet (well, almost) vegan dish that even Don thought was pretty tasty. The qualifier on the claim of “one-skillet” is that the recipe requires you to cook beans ahead. Nothing difficult or complicated, but this one extra step will make this dish taste amazing. The extra step is worth the effort. Promise. Be brave…

Serving Size: About 1 and a half cups 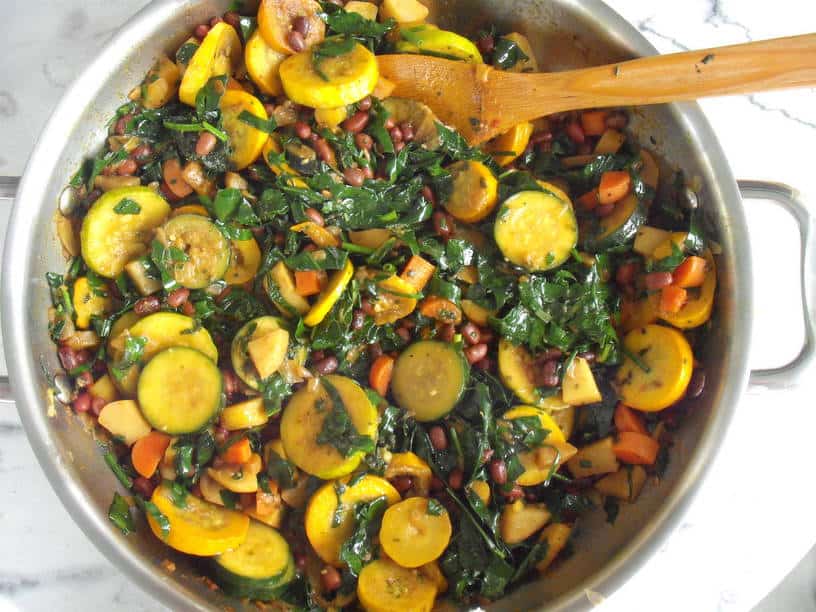 For the Beans
For the Skillet Dinner

To Cook the Beans
To Create the Skillet

Note that prep time does not include soaking the beans overnight or precooking them. The cook time here is between 30-45 minutes. You don't want mushy beans. You can extend the dish to serve 10 and add another level of protein by serving over long-grain brown rice or quinoa.

I used Adzuki beans because I not only love their flavor and the fact that they can make a great broth but also because of their high protein content. You might recall that I’ve used Adzuki beans before—actually, many times—and strongly suggest you use them here. They have a lovely flavor, almost nutty, and hold their texture well, which is essential because you are cooking them down and then reheating them for the final dish.

You can see that you have quite a bit of flexibility in your choice of vegetables going into this skillet dinner. The idea, of course, is to use what is fresh and abundant at the farmers market or what absolutely must go from your frig. You just need to remember two rules of thumb: first, always begin with your aromatics. Think classic Mira quoi: carrots, celery and onions. But yours may include fennel, instead of celery, for instance. Once you get that going in the oil with salt to make it sweat, start adding other things—sturdy potatoes and turnips next, followed by more tender selections such as the peas. Rule two: Anything chopped ends up the same size so that cooking is uniform for each addition.

I know it seems as if I have used a lot of pungent and heavy spices for one skillet, but we just loved this combination of flavors, especially when the beans were added and the liquid became buttery with the coconut spread. So don’t feel you must use my combination of spices, particularly if these aren’t your favorites. But do be brave here, and find a similar combination that suits your family. Also, while my choice of fresh herb was cilantro, yours can be parsley, basil, thyme, oregano or chervil or a mixture. I know there are strong reactions to cilantro. So go with that flow.

Please let us know if you are using Spigarello. Supporting local farmers and the production of heirloom vegetables keeps our food supply strong, clean and safe. I also used this wonderful green in a pureed soup as part of a deep cleanse I was doing. Because it is not bitter, as kale can be, it made a yummy, healthy and totally digestible dish.