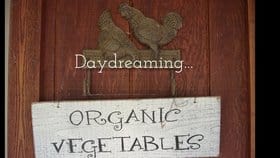 A few weeks ago, I was out with my husband Don, my good friend Rosi Biver and her neighbor Christine on a journey to Daydream Farm in Greenville, IL. Daydream Farm is owned by my CSA farmer Bruce Haas, but in all the years (Could it be more than 10?) I’ve been his CSA member, I’ve never been out to see the source of all my glorious food.

It’s a bit of a drive from Edwardsville to Greenville; winding backroads and some on-off rain added time to our trip. Then just before we found our destination, we made a wrong turn onto the property of Bruce’s neighbor, a fairly large-scale wheat producer.

His neighbor has a fine farm, with a lovely brick ranch-style house, a big impressive John Deere parked in the spacious gravel drive and several tall, well-maintained outbuildings. But this was not the home of Bruce Haas—I knew it immediately. As we turned the car around to exit before we were mistaken for trespassers, my eye caught sight of the acres and acres of wheat, as far as I could see… just wheat.

Backtracking down the road, we found Bruce’s driveway a minute later, a grassy path that blended into the fields and trees around it—so much so that we had driven right past it the first time. This was Daydream Farm, and as Don took a left in the right direction, Robert Frost’s poem, “The Road Not Taken” echoed in my head. 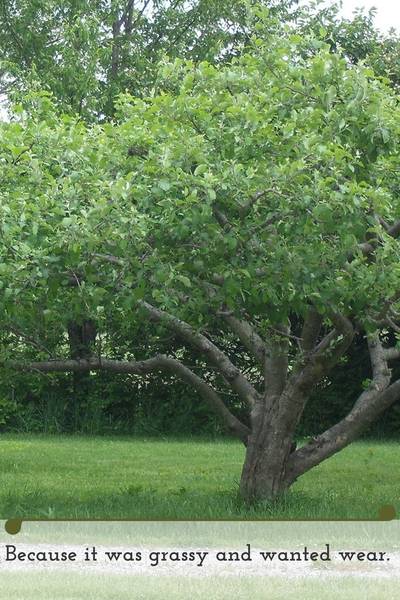 Frost’s seemingly simple poem has meant different things to many different people—most of which Frost claims never to have intended. For some, the poem is about fate beyond our control and arbitrary decisions that direct our lives. For others it’s about destiny, about being chosen by the path and living a life we were always meant to live, whether we knew it or not. For me, the poem is about intention and bravery, about choosing a way forward that speaks to our inner truth, even if that path is not the most popular or the easiest to travel.

The poet finds two equally appealing paths on his walk in the woods, and after some hemming and hawing, chooses the one “less traveled by.” He briefly convinces himself that he’ll go down the other path another day, but almost in the same breath acknowledges that: “Yet knowing how way leads on to way,/ I doubted if I should ever come back.” And in the final lines he foresees that 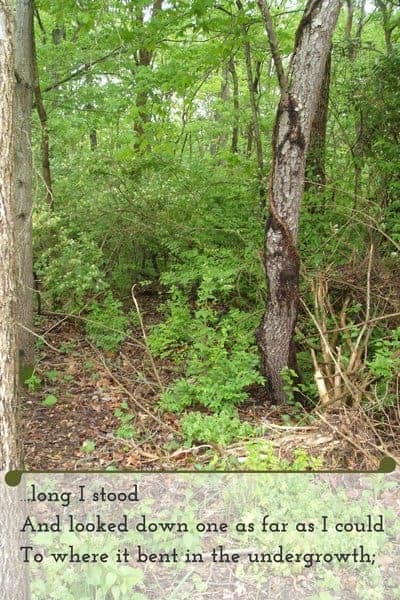 “I shall be telling this with a sigh
Somewhere ages and ages hence:
Two roads diverged in a wood, and I—
I took the one less traveled by,
And that has made all the difference.” 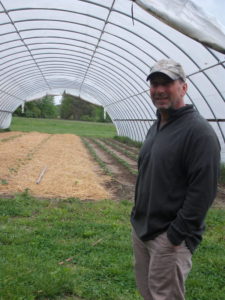 Bruce uses tunnels to help protect his crops from too much rain and too much sun. Having a small farm gives him more control over threats to his crops than large one-crop operations.

While not two equal choices, these two driveways seemed to present to me two paths, and Bruce had intended to take “the one less traveled by.” Daydream Farm is surrounded by old growth woods, a tangled emerald web enveloping small neat plots of asparagus, cabbage, garlic and (in the near future) tomatoes, kohlrabi, turnips, broccoli, peppers and green beans. Blackberry brambles and apple trees dot the landscape. Chickens peck the ground and roost in the leafy canopy. Birdfeeders and bee-loving native plants abound. 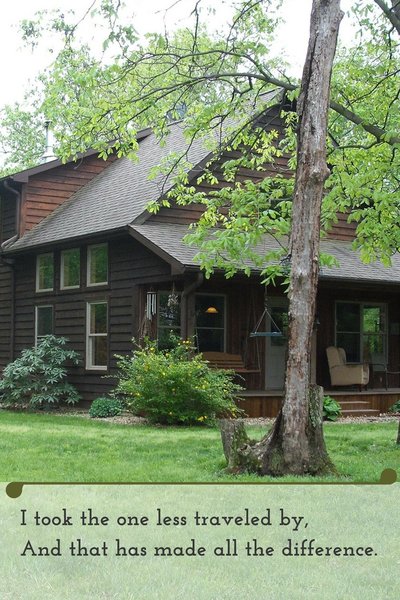 At the heart of Bruce’s property is his home, as woodsy as the farm itself, as comfortable as a lawn chair in the shade on a summer day. Enchanted, rustic, vibrant and peaceful, Bruce’s property lives up to its name and invites anyone who visits to sit and dream awhile.

Of course I could not possibly come empty-handed on this first visit to the farm: there were apple pie love muffins from my freezer, Harissa for the man with the asbestos mouth and my handcrafted body oil for Bruce’s wife Debbie. And of course I did not leave empty-handed either—Bruce gave everyone a large bag of his famously tender and sweet asparagus… well, Don got deer sausage. Can you feel the love there?

Even though the day was quite raw and damp and my fingers were beginning to cramp as we walked the fields, I hated to leave. Positive energy wrapped its arms around me, leaving me happy and calm, sheltered from chilly winds by the warmth of our host and the near-magical setting. But we had another stop to make before heading home, so we said goodbye (But only for a short while because the Goshen Community Market is now open!) and headed on down the road.

Not far from Daydream Farm is Marcoot Jersey Creamery, a seventh-generation, family-owned Jersey dairy farm, specializing in handcrafted artisan and farmstead cheeses of the highest quality. We were taking their 1 p.m. tour, then purchasing cheese in the on-farm shop and taste testing their famous ice cream, all made from the rich milk of the happiest Jersey cows I’ve ever seen… and I’ve seen my share. 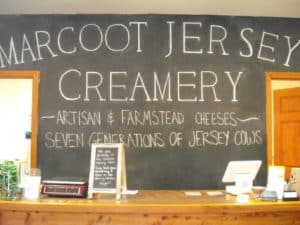 Transparency is key at Marcoot, where they lead you from the milking barn, to the nursery and feedlot, to the cheese-producing rooms. Amy and Beth Marcoot originally set out to follow their own paths away from the farm, attending college, earning advanced degrees and beginning their own careers. But then their paths forked when their parents announced they would be selling the farm. The sisters turned and took the road back home. 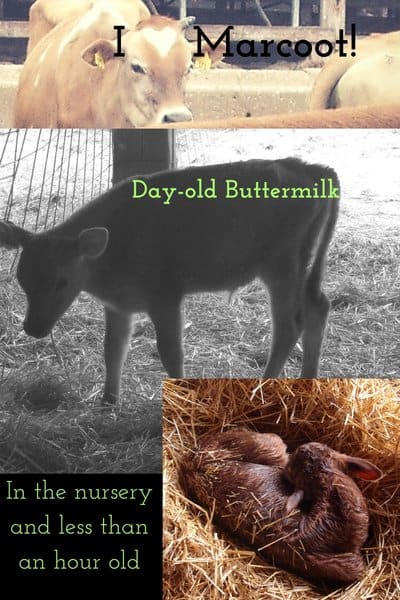 Today, Marcoot Jersey Creamery is a sustainable small farm, with about 65 head of pasture-raised Jerseys that provide the rich, high-fat milk used to make their locally famous cheese, from mild and creamy Gouda, to cave-aged sharp cheddars, to fresh mozzarella and Quark, a German cheese similar to cream cheese. There are about 16 varieties of cheese in all and at least eight flavors of homemade ice cream. The hands-down favorite ice cream in our group that day was Blackberry Pomegranate.

The Creamery started out to be “the road not taken” for Beth and Amy and their friend Audie, who is the cheese whiz (pun!) but intention to keep their family heritage brought them back onto the right path. Driving home that day, contentedly slurping up the last drips of our ice cream, we were all smiles and mighty impressed with the amazing people who live just down the road… the one less traveled by.

Once home, there was really only one thing left to do… cook. I was already daydreaming about an asparagus and caramelized onion quiche with Marcoot cave-aged Heritage and Tomme cheeses before we turned into the drive.