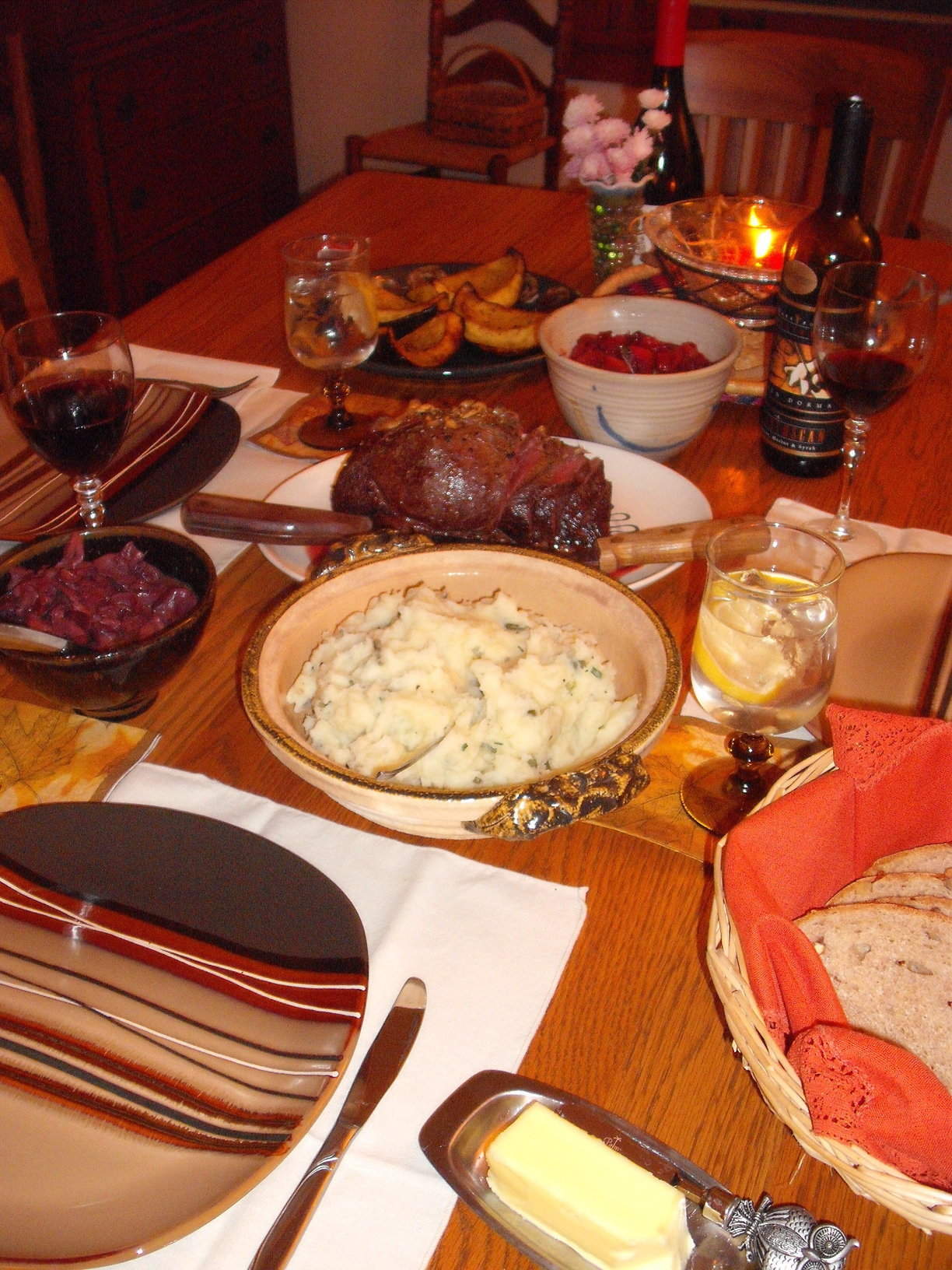 Today is my wedding anniversary. My husband Don and I have been together a long time, and over the years our gift-giving has become pretty laid back and simple. So this past weekend I could think of nothing better to give my honey than… meat. Local, grass-fed beef from The Family Garden, of course. I prepared a beautiful little sirloin tip roast, studded with garlic and served with a red wine reduction mushroom sauce (Leo’s mushrooms, naturally).

I also took the opportunity to try out a new cranberry sauce recipe offered by my good friend Debbie Ward, owner of Silver Tablet Marketing, to see if we’d consider it for Thanksgiving. Oh, YES. Tag on some Daydream Farm potatoes, mashed with caramelized garlic scapes (Remember those from last spring? Boy, did they freeze beautifully!), and a grilled acorn squash, and you’ve got a great anniversary dinner for two. Except one of the things we both treasure most are friends, so we invited our neighbor Deb.

Any of the following dishes could be a Thanksgiving dinner table star; everything was gluten-free, except our bread (We did make incredible wheat bread this week, with walnuts and fresh rosemary—Rosemary provided by Deb.), and most of my ingredients were local. So maybe you’d like to give one of these a try for your celebration.

Since preparing a meat dish always presents a challenge for me as a vegetarian because I am a “taster” in the kitchen (I have not eaten meat—at least not knowingly—for over 20 years.), I am a pretty by-the-book kinda gal when it comes to cooking it. My book of choice is my oft-cited Joy of Cooking. Why mess with perfection? 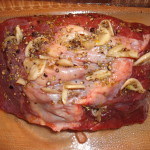 Here is the roast ready for the oven. You need to allow 20 to 30 minutes per pound, depending on how done you like your meat.

I sliced two large cloves of garlic (Georgian Crystal from Daydream Farms) very thin and tossed it with dried thyme, sea salt and fresh-crushed black peppercorns. I made about 10 slits in my two and half-pound roast and inserted the garlic slices. I rubbed a little olive oil on the roast and then rubbed on the salt, pepper and herb mixture.

The roast went into a pre-heated 400 degree oven for 10 minutes in order to give it a sear. Then I reduced the oven temperature to a low 250 degrees and continued to roast for approximately one and half hours. Donald likes his meat really rare—like still able to moo. So, I was looking for an internal temperature of around 125 degrees and a very pink to nearly red interior color. If you’d like your meat more done, you’d need to add extra time—you’d want an internal temp of at least 135 to 140 degrees for medium. Cooking this cut of meat beyond this level of doneness is not recommended because it will become tough.

Yield: About a cup and a half of cranberry sauce

Serving Size: a couple of tablespoons 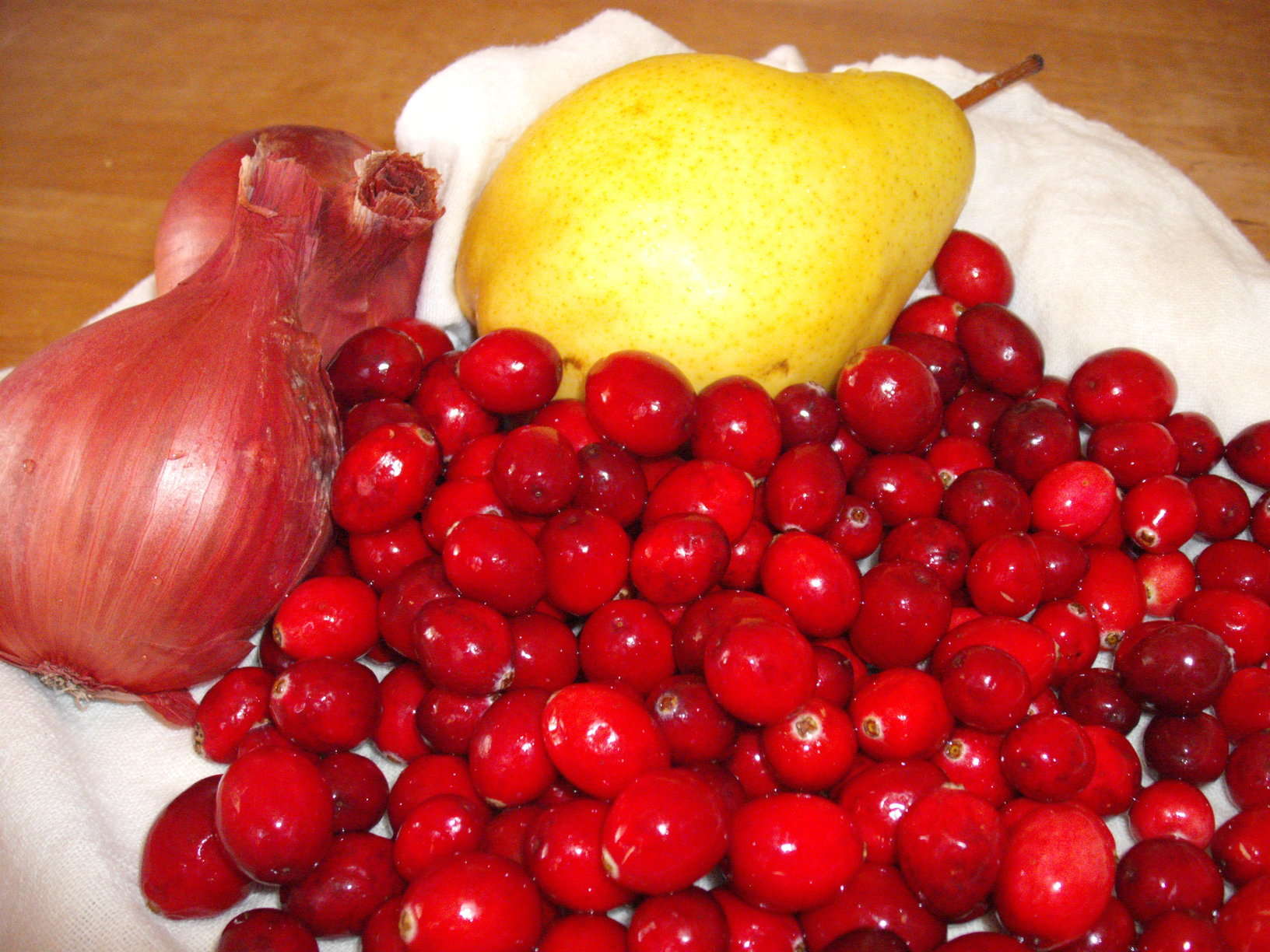 I made the cranberry sauce early in the day and let it chill in the frig. I’m sure it can be made a day ahead, maybe two. I’m also wondering about serving it warm—worth a try, I think. We served the cranberries over the grilled acorn squash wedges. All I did was wash the squash, cut it in half, take out the seeds and cut both sides in half again. I coated the wedges in olive oil and seasoned with salt and pepper. Donald threw them on the grill during the last 20 minutes of the dinner preparation. Easy-peasy.

gluten-free and relatively low in fat. 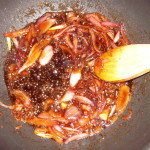 What you are looking for in step one is a syrupy consistency. While this is an easy recipe, it is important to be attentive so that the sugar doesn’t burn.

BTW, cranberries freeze like a dream—just toss the bag they came in (provided no holes) into your freezer. Since organic cranberries tend to only show up in the grocery store during November and December, I stock up. Cranberries, like other berries, carry a lot of pesticides if grown conventionally and have a huge negative impact on the environment. Want more information on a safe and green-friendly Thanksgiving menu? Visit the Environmental Working Group’s website for your downloadable guide. 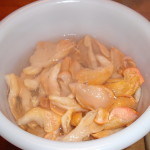 Rehydrated mushrooms pop right back. Just drain and use as you would fresh.

The sauce, which is so incredibly easy to prepare, took advantage of Leo’s mushrooms. I had a bag of dried pink oysters, and I simply rehydrated them with boiling water for a few minutes. (Truth-be-told they could have used a few more minutes rehydrating, but this was my first time with these.) The Joy of Cooking suggested using some of the juices from my roast to add depth of flavor to this sauce—and I’m sure that would be the case—but, hey, it’s my anniversary, too. We went meat juice-free.

In a medium skillet, I heated a few tablespoons of olive oil. I added the mushrooms (maybe two cups rehydrated) and a medium-size minced shallot. Once the mushrooms and shallot were soft, I added one and half cups dry red wine, brought everything to a quick boil, and then reduced to a strong simmer until the liquid had reduced by half. This took about 10 to 12 minutes. If I were adding the meat juice I would have added it with the wine, maybe a tablespoon or two. (Note that if you do add the meat juice, you’ll need to give the pan a light skim before the final step.)

Once the sauce was reduced, I removed the pan from the heat and stirred in four tablespoons of softened unsalted butter to make the sauce velvety, then seasoned with salt and pepper to taste. Try to do this sauce toward the end of the meal preparation so it can retain its consistency and come warm to the table.

While Donald smothered his roast slices with this sauce, the vegetarians found it worked really well as a dipping sauce for the whole wheat bread and a nice flavor enhancer for the mashed potatoes.

Finally, there were those potatoes. No culinary revelations here, really. I made them the way my grandma taught me:

Cut and peel (sometimes yes for peeling, sometimes no in my kitchen) one to five pounds russet potatoes—depends on the size of the dinner crowd. Throw in an ice bath and store in the frig until ready to cook, which is great on a busy cooking day.

In a large Dutch oven, cover the potatoes with fresh, cold water, season with a pinch or two of salt and bring to a rapid boil; then, cover and reduce to a medium boil until tender—maybe 20 to 30 minutes, depending on the volume of potatoes and their freshness.

Drain the cooked potatoes, reserving some of the cooking liquid, and return them to the pot. Using a hand potato masher (yes, the old-fashioned kind), mash the potatoes with a quarter to a half cup of butter until all big lumps are gone. Add a little of the cooking liquid and enough milk or cream to take them from mashed to somewhat creamy with a big wooden spoon (but not completely smooth)—you’ll just have to judge. Then season to taste with salt and pepper.

For my special dinner, I caramelized about seven garlic scapes in olive oil. I just removed them from my freezer bag, chopped them into small bits and added them with a big pinch of salt to the heated oil. I sautéed them about 10 minutes. I added this mixture to the mashed potatoes at the end and stirred. Yum.

What dishes do you prepare for the holidays or other special occasions? Got a favorite? 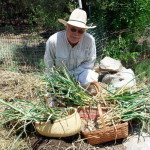 Place the cranberries, sugar, chilies, cilantro, onions, lime juice, peel and spices in a food processor; cover and pulse just until blended. Transfer to a serving bowl; chill until serving. Serve with chips.

Perhaps it will be a southwest Christmas this year…