The Challenge of Creating “From Scratch” 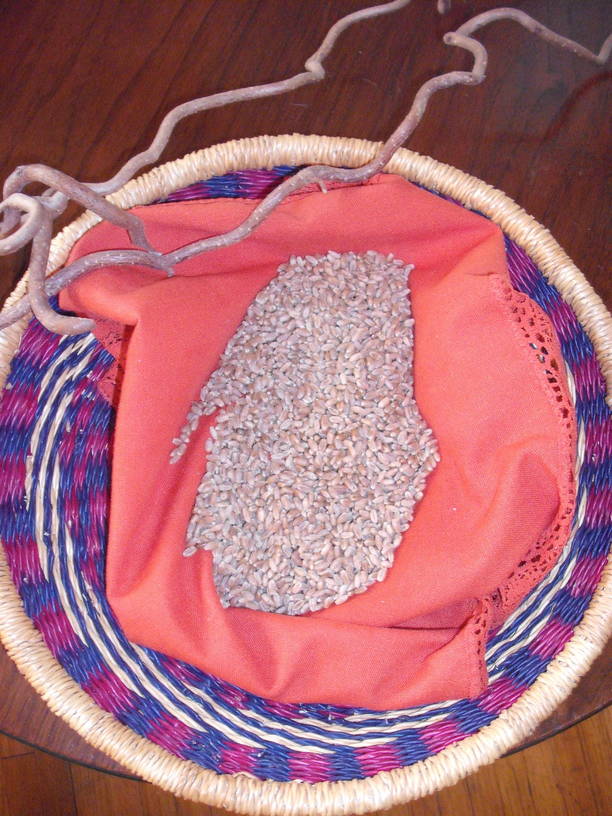 Well, I had to do something with all that vegetable stock I made last week, so I decided to cook up some whole grains. Specifically, some wheat berries, which are the entire wheat grain—its bran, germ and endosperm, minus the hull. They contain a lot of fiber and protein. This makes them a great choice for vegetarians.

Unfortunately, they also contain gluten. So the salad I created for a party on Sunday was a no-go for those who have celiac disease or are gluten-sensitive. If you are gluten-free but still think you might enjoy this dish, consider replacing the wheat berries with quinoa, a grain with a softer texture that is really a grass but still loaded with taste and protein. We’ll look at this substitution as we go along.

My salad is inspired by the popular middle-eastern dish tabbouleh. But I’ve tried to bump up the protein and give it some special twists. It might look a little daunting because some ingredients require multiple steps, but the wheat berries and the beets can be prepared the day before, and the rest is just pretty much toast, crush, chop and assemble. Great to take to a party or make for several quick and healthy weekday meals.

Ingredients prepared the day before–

Ingredients prepared at the point of assembly– 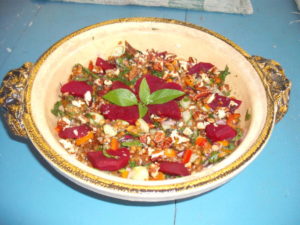 This salad is party-pretty, feeds a crowd and keeps well in the frig. Time well spent in the kitchen.

I know this seems like a complicated dish—after all, you even made your own stock! But this is really flavorful and much can be accomplished in advance. For one thing, it makes enough to feed an army and keeps well in your frig for several days of leftovers. You’ll still have some leftover stock for something else, and you can always double up on the beets to use as a quick salad add-in later in the week.

Do you have a favorite original recipe—something you’ve taken over the top? Do you use leftovers in creative ways? Please share!