The Family Garden: Where Everything Is in Tune with Nature 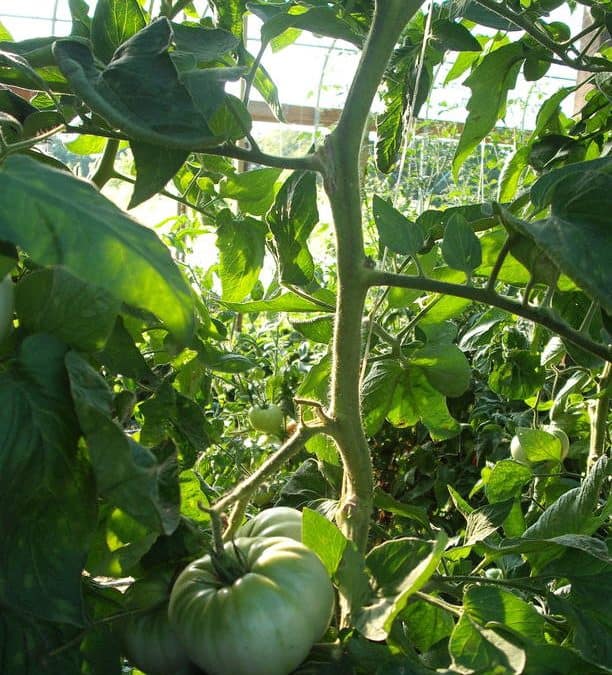 Remember the song “Green Tambourine” by the Lemon Pipers?

Tambourine, tomato….it’s all about sweet, sweet music in the garden…

I’m sure if you asked Jackie Mills, owner and main operator of The Family Garden in New Douglas, IL, what she does for a living, she’d tell you she farms. But when I visited her a couple of weeks ago and took a tour around her property to see all the projects she has going, I could swear she was conducting a symphony.

You might remember Jackie from a couple years back. The Family Garden was my very first stop on my very first “Know Your Grower” tour. And since that initial visit, her farm has done nothing but grow—as in more gardens, more vegetable and fruit varieties, a larger chicken flock of both layers and meat birds and new ventures into other small-farm commodities. But it isn’t the number of things she’s got going on that creates such a lovely melody as you follow her around the farm; it’s how everything works together—the same way all the musical instruments in an orchestra create one harmonious sound in a symphonic work, taking the listener from one movement to the next in a seemingly effortless flow. Jackie—with much sweat and strain and joy—commands the baton, and the result is a sweet song of green abundance. 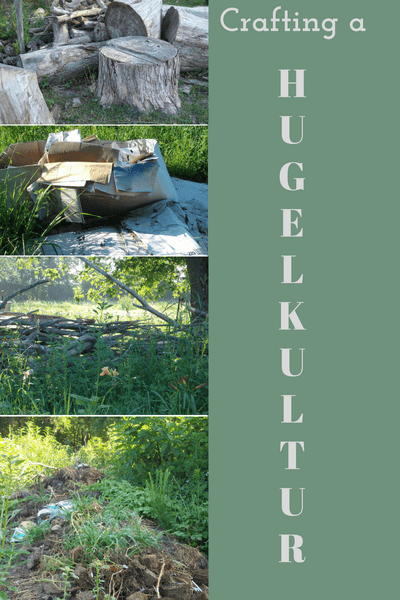 My decision to revisit The Family Garden this month began with one word: Hugelkultur. Huga…Huh? Hugulkulture is a German term that basically means “raised bed.” There is, however, so much more going on below the surface…literally! According to Paul Wheaton, a permaculture guru with a website called RichSoil, Hugelkultur can save the world from global warming by sequestering carbon, end world hunger and give future generations a, well, future.

For Jackie, solving global warming is a great idea and she’s happy to contribute to carbon sequestration solutions, but the day I visited, her focus was on tomatoes, herbs, melons, bees and cardboard. Yeah, cardboard, like in “box.” It’s a main ingredient in her ever-evolving stands of Hugelkultur, which will someday become raised, sustainable garden beds for everything from herbs to squash to who knows. The mounds not only hold in carbon but also capture water, creating their own reservoir from which to draw during dry—even drought-threatening–times. The mounds of hugelkultur—at all their various stages–are the first movement of her agricultural masterpiece.

“We began the Hugelkultur gardens with the limbs and stumps of fallen trees on our property,” explained Jackie. “To that we can continue to add pieces of recycled cardboard, leaves, grass clippings, straw, newspaper, manure and compost. Eventually, it will become a big spongy and fertile bed that will be perfect for growing vegetables and herbs.”

Another key ingredient in a recipe for rich soil and hugelkultur mounds is bone meal. I thought it was really interesting that Jackie doesn’t have to buy hers. “We butcher two to three head of cattle each year, some for sale and some for our own table,” said Jackie. “I’ve been learning to make bone broth, which the family seems to like and which I’ve read is very good for us. Since the bones cook a good 48 hours, they become porous. Once they’ve spent some time in the cooler, I found I could easily grind them down into powder, and we use that in the gardens and hugelkultur.” Efficiency on steroids…every instrument in tune.

Jackie noted that one of her longest and newest hugelkultur mounds (which sort of looks like a rustic fence at present) was already working hard by serving as a natural barrier between row crops on one side and the small barnyard on the other. “Since we don’t want fresh manure getting onto the garden beds, we built the hugelkulture here between the little barn lot where my cows spend mornings and evenings and the vegetable patches.” 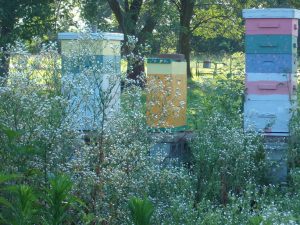 I looked over the hugelkultur from the barnyard to the garden beds on the other side, but to be honest, I just saw tall stands of weeds. Jackie was already changing melodies and basically read my mind: “We try to keep the weeds down as much as we can by using old sheets, which will decompose, cardboard (again!) and straw. I don’t like weeds. But I don’t cut down any weeds that flower because those are for the bees.” And there they were, colorful little bee hives all a buzz in the morning sun. I don’t know that I ever considered how weeds might be an important part of the orchestration of food production, but it certainly made pitch-perfect sense. So maybe more conventional farmers should make a musical note.

From “Flight of the Bumble Bee” we moved on into the high tunnel—sort of like entering Mussorgsky’s famous finale to Pictures at an Exhibition: The Great Gate at Kiev. “I am so proud of the high tunnel,” Jackie beamed. “I love working out here; even when the weather is chilly, the tunnel is warm.” Of course the day I was there, it was definitely not chilly and the tunnel was especially warm, but smelled like sweet soil—that’s the only way I know to describe it—like sweet summer soil. And tomatoes were EVERYWHERE! 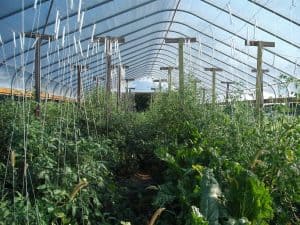 “I’ve got to work on the tunnel today because the weight of all these tomatoes is pulling down the sides,” Jackie explained. “We won’t be able to string up more tomato vines until I get that taken care of.” I marveled at all this bounty that was literally taking down the great high-tunnel gate. But I believe Jackie will defend the structure well and shore it up against the onslaught of the juicy, gorgeous ruby, green and gold globes. 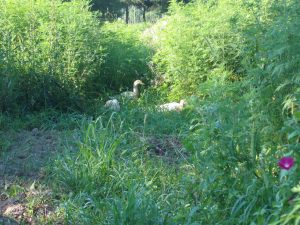 Everyone works at The Family Garden and nothing is wasted. Look to the right. I bet you thought these were ducks. Well, okay, they are ducks, but they are also hardworking Japanese Beetle trappers. Jackie just lets them wander in the flowery weeds and gobble up thousands of Japanese Beetles a day. They work for room and board, BTW.

It struck me as we turned back toward the house how much The Family Garden had truly grown since my first visit—from a simple tune on a fiddle to a musical score with a thousand violins. I noticed, for instance, that the few original berry bushes had multiplied into a brace of brambles. And Jackie generously shares her favorite berries with a chorus of chickens.

“We have planted several varieties of blackberries now all around the farm. I have a row of them planted on the chicken pasture fence, and the chickens are allowed to pick the ones on their side that they can reach. I get the rest,” she smiled. “While I am picking, they follow along, and I toss them any that are damaged or small and seedy. There’s quite a crowd before we are done with the row. The blackberries are excellent this year–some of the best we’ve ever had.”

When I first met Jackie and her daughter Debbie at their stand at the Land of Goshen Community Market, they were selling eggs, jam and smoked dog bones; now they sell fresh herbs and vegetable plants, carrots, cucumbers, peppers, eggplant, squash, beans, berries, beef, chicken, and, of course, the wonderful eggs….on and on. What hasn’t really grown, however, is help, as in hired help or motivated interns.

Jackie would love to offer willing and eager students or recent grads hands-on experience on a regenerative, harmoniously working farm. This would be a pick internship (pun!) for anyone who wants to learn to farm responsibly, with respect for the land and integrity for what they grow. Jackie is currently working on putting up a building this fall that will include two apartments to house interns for next year. “We hope to begin the process necessary to offer internships early next spring,” she explained. “I think it will be an excellent opportunity for students to come out and practice the skills they are learning. A bit of extra help here on the farm will also be nice,” she added.

So, if you are interested, stop by Jackie’s booth at the Land of Goshen Community Market before this season ends to discuss the possibilities with her. She’s there every Saturday from 8 a.m. to noon. You can even pick up fresh ideas–and ingredients–for dinner. And like The Family Garden on Facebook and follow their progress.