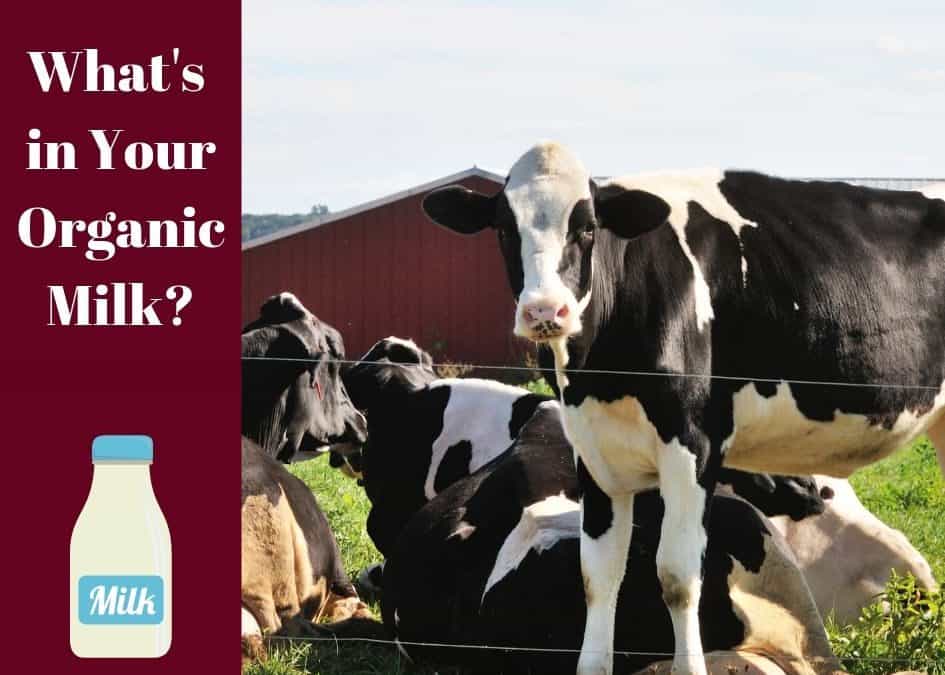 While I’m not a milk drinker, I am an organic dairy user—there’s always whole milk, heavy cream and full-fat Greek Yogurt in the frig. I’m also a believer in dairy farms—when they are organic or regenerative, humane, and sustainable, with a cautious eye to carbon mitigation. Yeah, I have a lot of qualifiers when it comes to dairy. But, really, you should, too, especially if—like my honeybun and me—you and your family enjoy milk daily.

Keeping up with the USDA and the American dairy system is not easy, however, nor clear, nor simple, nor—and this is the big gulp—honest in many respects. I have spent a fair amount of time over the past few years reading up on dairy because I do use it regularly in a lot of my cooking and because I know from trusted sources like the Cornucopia Institute and the Environmental Working Group that a happy little cow on a carton doesn’t really tell you anything…or worse, as in the case of the popular Fresh Horizons brand, represents a bold-faced lie. The Cornucopia Institute, for instance, has begun talking about “The Crisis in Organic Dairy”. But there is good news, too. So let’s start there.

Recently I had the opportunity to join in a teleconference hosted by The Organic Center to hear about a new research study at Emory University, comparing conventional and organic milk for a variety of factors, including pesticide load, antibiotic levels and growth hormone presence. I signed right up. And I wasn’t alone; I didn’t know it at the time of the program, but writers for the New Hope Network were also on the webinar. And some of what I’m talking about here is part of their takeaway, as well. Just milked it for all its worth, so to speak…. (lame, I know.)

The Emory study looked at comparative factors other than nutrition, specifically, the presence of antibiotics, pesticides and growth hormone in 35 samples from 18 conventional brands of milk and 34 samples from 10 organic brands of milk. The milk was purchased in stores from nine regions across the country, from California across the Midwest to several eastern states. It was delivered to the Emory lab unmarked; researchers who did the high-level testing had no clue as to brand, location or conventional vs organic. It all just looked like milk.

“This study is especially exciting because the researchers developed methods that are more sensitive than past analyses, including testing methods that have been used by the Food and Drug Administration (FDA); also, the study measured levels of chemicals that were previously unreported,” explained Jessica Shade, Director of Science Programs for The Organic Center. “These new methods give us a true picture of the presence or absence of residues in milk. The methodology was proven and solid, and put systems in place to control for results that would inaccurately indicate the presence or absence of the residues [false positives and false negatives]. The statistical significance was so clear and decisive that it gives us confidence that what we found in the study would also be the results of a larger sampling,” Shade said.

New Hope Network Provides the Findings in a Nutshell

For antibiotics: Antibiotics were not found in organic samples but were detected in 60% of conventional milk samples. Specifically, residues of amoxicillin, oxytetracycline, sulfamethazine, sulfadimethoxine, and sulfathiazole were all detected in conventional milk.  Importantly, residues of sulfamethazine were found in 37% of the conventional samples, and sulfathiazole in 26%. The use of both of these antibiotics for dairy cows has long been banned by the FDA due to concerns about the impact of sulfa drugs on human health.

For Pesticides: The researchers tested for a wide variety of pesticides currently used in conventional dairy production. The organic samples all tested zero for residues of pesticides in current use. However, conventional milk showed residues of different pesticides in 26% to 60% of the samples. Those pesticides included atrazine (26%), chlorpyrifos (59%), cypermethrin (49%), diazinon (60%), and permethrin (46%).*  Of note is that conventional milk tested positive for residues of the dangerous neurotoxin chlorpyrifos in 59% of the samples. Chlorpyrifos is associated with developmental issues in babies and children. Restrictions were imposed by the Environmental Protection Agency on the use of chlorpyrifos in residential settings in 2000. The pesticide was ordered by a federal court to be banned in agriculture in 2018, but this ban has been appealed by the current administration.

Ok, for my money and my health it is easy: buy organic. Yes, it costs more, but those costs represent many things—how animals are treated, what they eat (and consequently what you eat), how sustainable the farm operation is—meaning is it a major or a minor contributor to climate change. So spring for the extra money, I say. The planet’s health and your family’s health are at stake.

“There needs to be more research conducted to expand this important study and to test more samples across the U.S.,” said The Organic Center’s Shade. “But in the meantime, in order to get the important nutrients from dairy, the best choice is organic dairy.” Done.

But I said this was “udderly complex,” right? And the Cornucopia Institute has called the organic milk industry a crisis. Why? So here’s the bad news….

In the August 2019 e-Newsletter from The Cornucopia Institute, the headline was ominous: Alleged Animal Abuse at Known “Factory Organic” Dairy Under Watch of Texas Department of Agriculture. How do the words “factory” and “organic” ever end up side by side? Actually, it happens a lot, and it is why just “buying organic” isn’t good enough. According to Cornucopia, “Natural Prairie Dairy, one of the first ‘organic’ dairies to employ industrial stocking practices, recently made headlines again. The Animal Recovery Mission (ARM) released a video in July showing severe abuse of dairy cattle at an operation housing approximately 14,000 cows, certified USDA organic by the Texas Department of Agriculture (TDA).” Warning: you may not want to link to the video and the full report; it’s pretty rough. But it is the truth and the truth can set you free from poor choices.

The long-term unfolding scandal in organic dairy that Cornucopia has been documenting and fighting for some time now is certainly complex and definitely heartbreaking, not to mention horribly unhealthy for the cattle, the climate crisis and us. Here’s another e-Newsletter snippet: “’The abuse caught by the undercover investigator is appalling, whether it comes from an organic or conventional dairy,’ commented Marie Burcham, JD, The Cornucopia Institute’s director of domestic policy. ‘Cornucopia reported to the USDA in 2010 that this certified organic dairy was violating organic regulations. Almost a decade later, Natural Prairie Dairy has not been decertified. We want proof that the USDA is willing to enforce the law.’”

Since 2010! Yet, as Cornucopia notes, “that proof remains elusive. Almost a month after ARM reported on the ‘squalid, overcrowded, and unsanitary conditions’ at Natural Prairie Dairy, the operation remains listed as certified in the USDA’s Organic Integrity Database, and TDA remains an accredited certifier. Cornucopia has filed a formal legal complaint against the operation and its certifier.”

Many times on this blog over the course of the last four years, I’ve directed your attention toward The Cornucopia Institute and to the Environmental Working Group as trusted watchdogs for public health, environmental safety, and humane, sustainable farming practices. Along with The Organic Center, these are still trusted sources with reliable information. So to find the very best organic dairy, review Cornucopia’s Dairy Scorecard before you make a purchase.

I think when all is said and done, we really do have answers. We may need to read up on the latest research or attend a webinar or two, but this will be time well spent. The scorecards and reports sort out much of the complexity and also explain why we will be paying more and when and where that is appropriate.

Which dairy products do I buy? In my frig you can regularly find Organic Valley, Kalona Supernatural and Trader’s Point—nothing below a four-cow rating from Cornucopia, if I can help it. I also buy local, which is sort of where I think we are headed next in this discussion, so stay tuned. Got organic milk?

Portions of this post were provided by New Hope Network. I am a member of the New Hope Influencer Co-op, a network of health and wellness bloggers committed to spreading more health to more people.”