Ugly Vegetables and Fruits: Could they be the new chic? 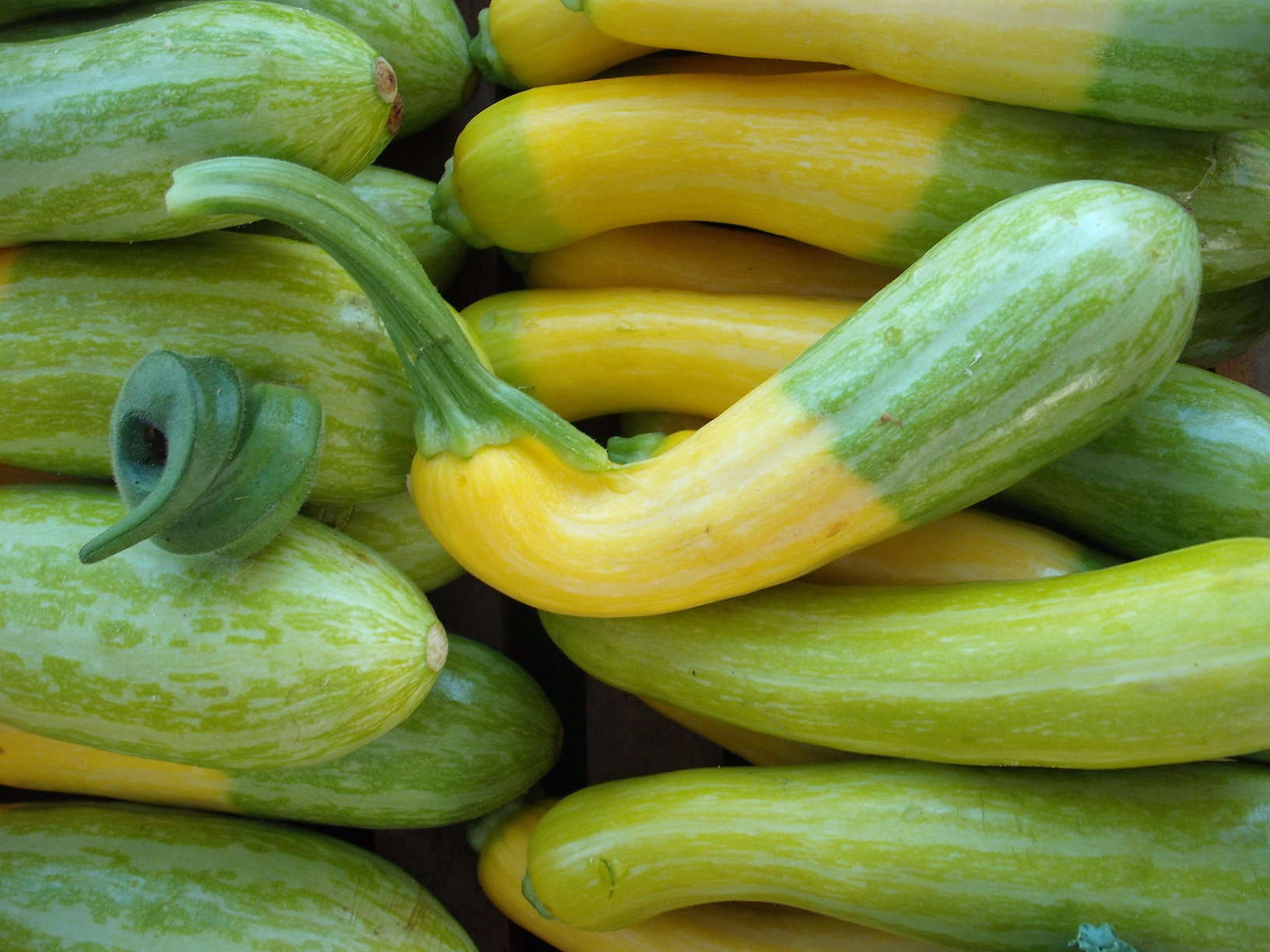 Late last year, my friend Mary Lynn sent me an article from The New York Times that she knew would spark my interest: “Getting Ugly Produce Onto Tables to Keep It Out of Trash Bins” (Nov. 24, 2015 by Jennifer Medina). Alongside the printed article, there’s a really cute photo of an eggplant that looks amazingly like a caricature of Richard Nixon. But I know, as Mary Lynn knew when she sent me the clipping, the problem of wasted (perfectly good-to-eat vegetables, fruits and more) food in this country is anything but funny.

As we inch nearer to the opening of the Farmer’s Market Season 2016, I’d like to step back from recipes and cooking tips for a moment to ponder some “food for thought.” If you have been reading along on this blog, you’ve figured out that I have frequently taken the opportunity to nudge people away from waste—go with the flow and cook what’s available locally and seasonally, learn to substitute ingredients for what’s on hand, be creative with leftovers, start from scratch and make your own stocks and broths, compost. My list goes on, as does my own learning process.

Partly, it’s how I was raised by my grandparents, who grew a lot of their own vegetables, picked fruit and nuts from generous neighbors’ trees, canned and preserved, believed in turning Sunday’s roast and potatoes into Monday’s hash, and even fished for their supper when the weather was nice. I was up-front and personal with “making do” during the early years of my life. But there was always plenty to eat, and it was always good.

The more I get to know the folks who grow my food, the more I learn about the hard work of farming and the dire need to be kinder to the Earth, and the more unpleasant discoveries I make about the economics, politics and greed of the commercial food industry and factory farming, the more aware I’ve become that something must change—and that change needs to begin with me. Most people I know feel the same, but they also feel overwhelmed, helpless and often convinced whatever they do won’t change anything. But, really, we can all have a voice in the conversation, and we can all create positive change.

Just shopping at a local farmer’s market instead of a big grocery chain is the perfect start. For one thing, the produce you see at the farmers’ market won’t necessarily look like the pristine produce at your supermarket. That’s because, while big grocery chains love to promote the fact that they buy from local growers in the spring, summer and fall, they forget to mention that much of what local growers have to sell—perfectly good, delicious food—will be rejected as “imperfect.” This causes a great hardship on local growers, especially organic growers from small farms, and creates the shameful waste discussed in the Times article above. 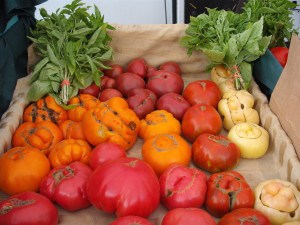 These heirloom tomatoes carry romantic names like Brandywines and impart complex delicious flavors incomparable to the flat taste of supermarket mainstream varieties. However, they would be rejected by most supermarkets as inferior.

One of my favorite writers, Barbara Kingsolver, describes just this problem in Animal, Vegetable, Miracle in a chapter titled “Life in a Red State.” As she relates the attempt by local growers to partner with and sell their produce to area supermarkets, she explains: “Supermarkets only accept properly packaged, coded, and labeled produce that conforms to certain standards of color, size and shape. Melons can have no stems attached, cucumbers must be no less than six inches long, no more than eight. Crooked eggplants need not apply.” But as she deftly notes: “It takes as much work to grow a crooked vegetable as a straight one, and the nutritional properties are identical.”

In the end, her neighbors sought out local churches and social justice groups to get the mountains of rejected, but perfectly edible, perishable food into the hands of people who could use it before it went to waste. “Poverty and hunger are not abstractions in our part of the world [southern Appalachians], Kingsolver says, “throwing away good food makes no sense.”

I think we’d all agree, it makes no sense wherever you live.

The Times article does give us hope, as the reporter introduces us to Imperfect Produce, “a San Francisco Bay area start-up that has been selling what it calls ‘cosmetically challenged’ fruits and vegetables….” The company’s chief executive Ben Simon and its chief operating officer Ben Chesler were first inspired in college by the trays full of perfectly edible food going into cafeteria trash containers. They first began Food Recovery Network, “which now has more than 100 colleges donating uneaten food to soup kitchens,” and then moved on to start Imperfect Produce, where their goal is to lower food waste, help farmers and get healthy affordable food into the hands of people who might not otherwise have access to it.

The Times reporter also points to the Waste-Free Kitchen Handbook, which author Dana Gunders offers as encouragement to “home cooks to look for every chance to use a stalk that they might otherwise throw away.” Here’s an eye-opening and embarrassing quote from The National Resources Defense Council website, where Gunders is employed:

American shoppers are collectively responsible for more wasted food than farmers, grocery stores, or any other part of the food-supply chain. The average family spends a shocking $2,225 every year on food they don’t eat. This problem is so massive that if food waste were a country, it would have the third-largest environmental footprint after the United States and China.

Of course, I’ve done my share of wasting food throughout the years, too. Any family where adults work outside the home, have kids with busy schedules, and try to enjoy a little social life will waste some food; it’s inevitable. In fact, recent statistics from several sources reveal that over 50 percent of Americans eat out at least once a week. (And if you delve further, you find that Americans eat more when they eat out and tend to make worse food choices. But I digress.) What’s of interest here is that when we eat out so often—some sources say as many as two or three times per week—we end up letting the food we purchased for home cooking go to waste. There is an apparent disconnect between what we buy and what we are truly able to cook and use in a certain amount of time. 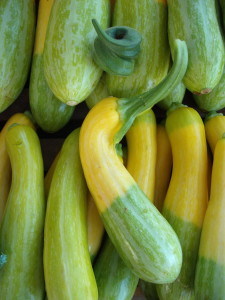 Unfortunately, this little “corkscrew” okra and crooked summer squash would never make it to your local supermarket.

Another resource mentioned in the Times article is American Wasteland, a fascinating book and website by reporter Jonathan Bloom. Both Gunders and Bloom reveal how complex and how damaging wasting food can be. And the blame does not fall entirely on faulty government regulations, greedy food kings or mismanaged supply and demand. In American Wasteland, the answers get downright depressing. Because, we—me and you—are the consumers who have come to expect perfect strawberries in January, flawless tomatoes in December, perfectly shaped eggplant in May and grocery displays that are never—ever—empty. We create the buying fuel that powers much of this disaster. So, if we want the world to change… remember Gandhi? Be the change?

Well, yes, this world of waste is a problem that stems (could not resist the pun) from deeper, more complicated causes than just a reluctance to sell or eat “ugly” food. (BTW: Bloom has a great video on his site about ridiculous “sell by” dates on milk that should open your eyes and inspire you to learn more about what’s happening to your food.) And, I don’t mean to simplify all this by saying that shopping at a farmer’s market will create sweeping change. But it will create some change, even if only incrementally. Multiplied by lots of us, the change becomes more impressive and more permanent. If we all decide it’s unfashionable to throw out perfectly good food, behavior will change. If we all embrace “ugly” produce, ugly will become the new chic.

And as luck would have it, when I left the first draft of this post on Monday afternoon to make a little dinner, I found (and you’ll just have to believe me here because I did not take a photograph) an orange hiding underneath my apples in the crisper. Only this orange was not so crisp—one end was mushy and slightly stuck to the side of the crisper. What to do?

Quick game plan change—instead of my lemon detox dressing for our salad that night, I cut off the mushy end of the orange and salvaged about a half cup of fresh (perfectly good) orange juice. To this I added a pinch of sea salt, a pinch of ground cumin, some fresh cracked black pepper, a teaspoon of Dijon and three tablespoons of flaxseed oil. Whisk it all together and you’ve got guilt-free orange vinaigrette dressing for dinner. What great food salvages have you made lately?