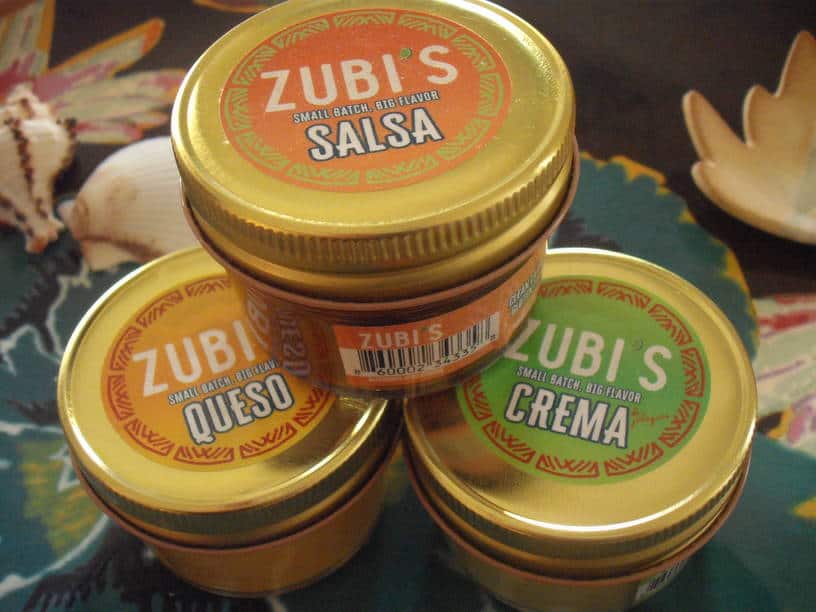 Well we are closing in on Cinco De Mayo, yes? Not going to a big party? Then let the party come to you! I knew when the latest New Hope Network Blogger Box arrived, my little starter set of Zubi’s Organic Queso de Jalapeño, Crema de Jalapeño and Zubi Salsa were going to be a big hit. So I just didn’t tell Don they were vegan. A slight omission that he never even questioned. He just kept shoving tacos in his mouth and reaching for more sauce.

The background on Zubi’s is as rich as the flavor of the sauce and so is their commitment to giving back. But what’s gonna get you is the flavor. And, believe me, I’m a person who does most stuff from scratch—all my salsa’s and sauces, all my fun toppings with local farmer’s market ingredients during those warm-weather patio-party meals.

But it’s April—not much growing, and we were kind of in need of a little family party. Zubi’s to the rescue. Not only are these sauces no-brainer easy—just pop that jar—they are amazingly rich, creamy and flavorful. We kept eating tacos just to try new sauce combos. Lots of smiles, not to mention dark beer and red wine, around the table.

And I thought that rather than just tell you about Zubi’s and introduce this sweet company, I’d give you some ideas on how to use them by sharing our taco fixin’s, including homemade mesquite flour tortillas that are easy to make, my fresh veggie crunch combo with pickled red onions, and some breaded, oven-baked bluegill fillets. So here goes… comencemos la fiesta! 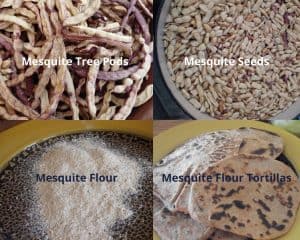 Mesquite Flour from My Friends Gary and Kristine

Remember Gary? Remember smoked dark chocolate that has graced my moles and chocolate barks over the years? Ok, coming back to you now, right? Since they made their move back home to Arizona, I have missed Gary and Kristine a lot. But we still stay in touch, and I hear all about their olive and mesquite trees. In fact, several months ago, Gary packed up some of his mesquite flour and shipped it to me, challenging me to come up with a recipe. Challenge accepted…even though I took a good nine months to get started.

Mesquite flour, which comes from seeds, not grain, is a powerhouse of nutrition. (See Gary’s photos top left and right.) According to the website Heal with Food, the big takeaways from mesquite are high levels of protein and fiber; low glycemic index; and an abundance of antioxidants, iron and anti-inflammatory properties. Yes…superfood. Plus, it is totally sustainable–almost all of the mesquite tree can be used, say experts at Tusconivores.

Tusconivores also offered a basic tortilla recipe that I adapted for my Zubi’s tacos. Worked so well that I am now working on different variations of the tortillas. I’m not there yet, but I hope to use commercial gluten-free flour mix to create a gluten-free tortilla, since another bonus of mesquite flour is the absence of gluten! And the Zubi’s Queso is so good on these light, soft tortillas! For now, let’s heat up that cast iron…
Mesquite Flour Tortillas 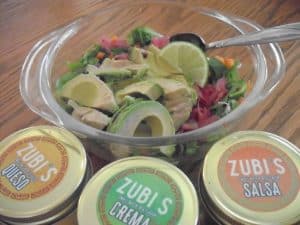 I am such a fan of Patti Jinich, star of Patti’s Mexican Table. She is my inspiration for everything south of the border that I attempt in my own kitchen. Literally FOREVER I have wanted to make her Pickled Red Onions, but just never had. Then when Zubi’s appeared on my doorstep, I knew it was time. The recipe I attempted is a bit of a compromise on Chef Jinich’s masterpiece, but it worked. I plan to go back and replicate her modified bitter orange version soon, but just didn’t have all the ingredients when it came time to put the onions in the jar. And this is a great lesson—don’t let what’s not in your kitchen stop you from being creative! You can make do…just fine. Here’s my version of classic pickled red onions—now a refrigerator staple because we just can’t get enough! 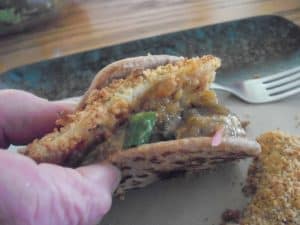 Instant (well nearly) fiesta, right?! The Zubi’s sauces made all the difference and turned a ho-hum Saturday into a real party for two.