It is a world where everyone gets along, everyone is respectful of privacy and quiet, everyone does a fair share of the work, and everyone benefits equally from the efforts of all. “So where is this Eden?” you may ask. It’s in East Pierron, (Millersburg) IL. No way! Way.

This peaceable kingdom is the farm and apiary of my friend John Accornero. John is my friend who always brings me back to sanity when I get all riled up by the ways of the world. You might remember my post about John from last year about finding magic at the farmers market. And having visited his farm, I can see why he is able to calm me down. A farm with bees runs by balance, respect and equitability… I guess the way we’d all like the world to run, with a sense of fairness and an adherence to personal responsibility. Bees seem to have this all down; we are—at best—catching on. Considering that honey bees pollinate one-third of America’s food supply, we’d better step it up on our end. 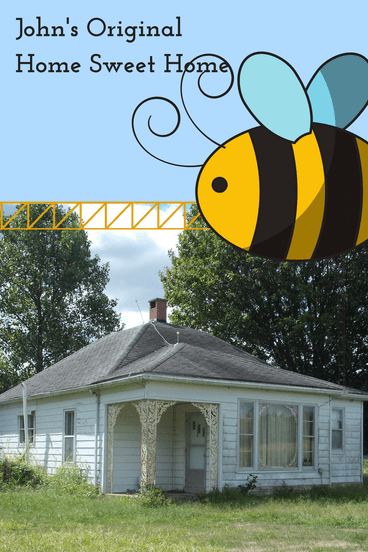 On my visit to John’s farm and apiary last week, I discovered right away that there is quite a bit of work to running a honey bee operation and producing honey for market, and John does it all by hand and from scratch—exactly the way I prefer to cook. His farm has several structures, including the nearly hundred-year-old farmhouse (from a Sears and Roebuck kit!) that stands near the center of his farm and where John grew up.

But the place where all the “buzz” happens is in the “honey house,” a mid-century ranch near the front of his property that serves as work place and storage for all that goes into building hives and harvesting honey.

John has done a lot of research on honey bees and their current peril from a host of environmental factors such as infiltration of the Varroa mite, Nosema apis and Small Hive Beetle (the newest invasive species brought from South Africa that has traveled up the eastern US coast to the Midwest and beyond). Also the use of Systemic herbicides on crops, which delivers chemicals through the center of the plant, not just on its exterior surface, and right onto the “plate” of a busy honey bee. But John doesn’t let these things bother him too much; he studies, amends his practices and persists, working his way to solutions around the seemingly overwhelming and ever-encroaching urban sprawl. So his bees are in good hands.

And that is a very good thing. According to the Natural Resources Defense Council, “The average person sitting down to dinner probably doesn’t realize the important role bees played in preparing that meal. Here’s something that might surprise you: One out of every three mouthfuls of food in the American diet is, in some way, a product of honeybee pollination—from fruit to nuts to coffee beans.”

For John solutions begin with building a better mousetrap—or in this case returning the honey bee to its natural smaller size and treatment-free management practices. Shrinking the bee to its original size is accomplished by using small cell foundation, which means he will have smaller bees. This small-cell foundation also provides egg-laying surface for the queen. “The bees will only grow until they fill the cell,” John explained. And why would John want smaller bees when everyone else seems to think bigger is better? Smaller bee size has been linked to higher resistance of viruses and diseases brought on by the pests mentioned earlier that currently plague the bee population of the world. While bee size is a debated theory, John believes, based on his years of raising bees, that this theory has great merit. So John’s bees are small but mighty.

Treatment-free management allows the bees to use their immune system to fight off many of the diseases attacking the honey bee. After about six years of die offs from no chemical treatments and letting the bees fend for themselves, the survivors are now able to manage when they encounter mites, beetles and other diseases.

Another thing John insists on is sharing his harvest with his winged tenants. “A large percent of the honey produced is collected and sold, and a small percent is left for the bees,” said John. “Some bee farmers supplement their honey with sugar water, keeping a large portions of honey for market, but bees lexist on honey,” he said. “That’s how they evolved!” John considers the percentage the bees get to keep as their part of the enterprise–rent, if you will–for those cozy hives and the bountiful bee-friendly fields that John maintains to keep his business partners happy and productive.

During my visit, John showed me how he constructs his hives, processes honey and meticulously cleans everything at the end of the harvest to make sure his little bees stay healthy and strong. We took a stroll through the pollinator field that was full of powder-blue chicory, crimson clover (over and over), straw-colored birdsfoot trefoil, Alsike and Dutch clover. It was all so beautiful, quiet and interesting.

But the very best part was suiting up with John (We’re in that featured photo above. I was holding the smoker, which sort of dulls the bees’ smell so we don’t get mistaken for food!) and following him out to a bait hive he’d placed near the back of the farm this spring. He and I were both hoping that a new colony of bees had moved in. And they had! It must have been the location and the quality of construction that sold them on this property. While he was checking the condition of the hive and trying to estimate the number of new bees, I was able to witness a new little bee being born (When in my life did I ever expect to write those words?) Amid the frenzy of worker bee activity, there she was making her way through the wax cap on her cell and entering the world for the first time. Of course, I have no idea if she was really female, but—in that moment–she was for me.

John’s farm is a magical place, run by an amazing person, who is wise, kind, gentle and considerate. He is the very best landlord a bee could ever desire. But of course the proof is in the… honey. We’ve eaten John’s honey almost exclusively for over three years, not to mention the many jars we give as treasured gifts at Christmas. We taste test around every once in a while, but (like his bees) always return to the hive. Naturally, I did not let the opportunity to purchase a big jar of honey get past me, so I came prepared. But when he handed me the jar I noticed the price had dropped by a dollar. “A smaller jar?” I asked. “Oh no,” he said. “I’ve just saved a little money sharing space at the market this year, so the price has gone down a bit.”

John sells his honey on Saturdays at the Land of Goshen Community Market in Edwardsville, IL It is THE BEST honey I’ve ever tasted. So you should make a trip to town on Saturday and buy up a few jars. Bell rings at 8 a.m.