Backwards to a Bright Sustainable Future 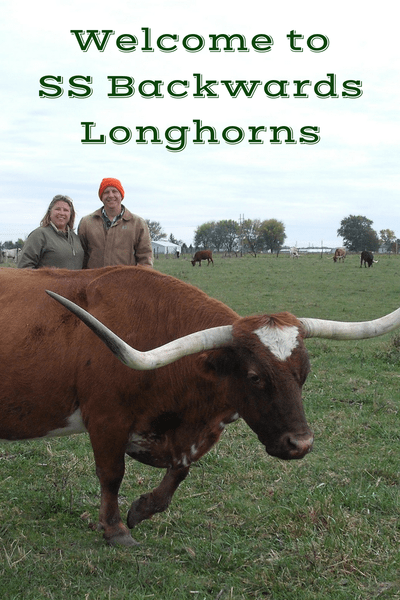 I stood in an empty pasture, staring north toward a stand of trees. It was a sunny day, cool but no wind. The quiet of the rural landscape was pleasant and disarming. In the distance came the pounding—at first a vibration—then sound like thunder rolling in from a county over. Here they come, I thought. I couldn’t take my eyes off the empty break in the trees. A second later, a herd of majestic Texas Longhorns barreled through the pass and came at me headlong up the hill. Believe it or not, I was exactly where I wanted to be. 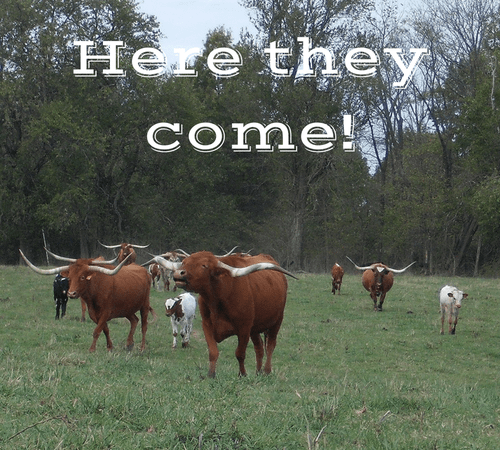 It was a couple of Sundays ago when Don and I took a drive north to Medora, IL to visit Dara and Scott Simmons at their farm, SS Backwards Longhorns. As the name implies, Dara and Scott raise award-winning Texas Longhorns. Viper, their current “lead bull,” has been shown four times in the past year and won top prize at all events. So “award-winning” is not an exaggeration on my part.

I originally got to know Dara at the Land of Goshen Community Market, when I started buying almost all the beef Don eats from her. Over the past several years, Don has become their biggest fan and happiest customer (Remember Jerky, the ultimate stocking stuffer? Yep, it comes from SS Backwards.). Later, I met Dara’s husband Scott on a market day when she was busy with their sons and school activities. It wasn’t until our visit to their farm that I met them together. But all along I had known they were a well-working, dedicated team, juggling the rugged work of the farm, with the never-ending job of parenting, and the competitive business of livestock sales, both cattle and meat. As busy as they are, though, you can tell that they’re happy. They probably don’t even realize it, but they never stop smiling when they talk to you about their family, the animals in their care, their farm, and their plans for the future.

As we were driving up to their property, we could see a few head of cattle off in a small pasture (I later learned this was a sort of “honeymoon” retreat for a bull named Silver Saddle and a few of his lady friends.) The first thing I thought when I saw them was how different they look from “regular” cattle. Their immense horns immediately distinguish them as something special, and their shape and size, which is big but lean and muscular, make them both magical and fearsome.

The fact is, in today’s world of sustainable agriculture and health-conscious eating, the Longhorn is simply in the right place at the right time. This breed is 70 percent leaner than more common English cattle breeds, and Longhorns are naturally far more resistant to common diseases. They take very well to pasture grazing, which is what made them the breed of choice in the days of the Wild, Wild West. They are the sturdiest of survivors and one of the defining icons in American mythology. According to the International Texas Longhorn Association, these basically wild cattle “could walk amazing distances, living off the land, swimming rivers, surviving desert heat and winter snow. From [the initial] clash between men, animals and the environment grew the world-famous American cowboy.”

Of course, once the “Business of Agriculture” and its notion of “quicker, fatter and easier equal better” took over, the Longhorn’s popularity disappeared. Eventually, Texas Longhorns–which have bloodlines stretching back to cattle bred by the Spanish and brought to the New World on the ships of Christopher Columbus—were all but gone. Add in the Industrial Revolution, the insatiable need for candle wax (read extra fat for tallow) and the Longhorns came up short on value every time.

Until very recently, true Texas Longhorns were gaining a new reputation–as “endangered”. The Livestock Conservancy, whose mission is “to protect endangered livestock and poultry breeds from extinction” because these breeds “represent an irreplaceable piece of earth’s biodiversity and offer incredible variety that may be needed for future farms – robust health, mothering instincts, foraging, and the ability to thrive in a changing climate,” has published a white paper on the need to protect and preserve this breed in order to strengthen American agriculture. Which brings me back to Dara and Scott and the pasture where we are about to be trampled… 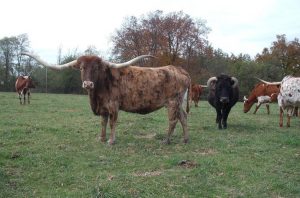 This is Betty. Betty is the longest horn cow in Illinois, measuring 91 7/8″ tip to tip. She’s also an expectant mom, due in April.

If Dara is one of the most friendly and thoughtful market vendors I’ve ever met, Scott has got to be the most enthusiastic rancher on this sweet old Earth. Get him talking about his herd, and you need to be prepared for “the long read”. Pull up that saddle and hitch your ride. His cattle are the focus of an ongoing love affair between Scott and the genetics, health, personalities and enchantments of the Texas Longhorn and, specifically, of the animals under his care.

And as he chatted away about colors (Longhorns have 32 separate colors creating an almost infinite number of hues, combinations and patterns.), temperament, resilience and the truly complex science behind a healthy herd, we all walked out into the middle of that empty pasture. I thought we were only going to look at the natural pasture grass. Then, he turned and said, “Ok, let me call them.” He sort of “mooed,” really loud and long in a northerly direction. We all looked at the empty pasture and a stand of trees in the north. Long before we saw them, we heard them pounding the Earth. I believe the technical term for this is a stampede… and they were coming right for us. Ok, no one else was moving, so I didn’t either, as I watched them pummel toward me—cows and calves, the famous Viper, and a bevy of young beautiful heifers—one big swift-moving family. And, then… 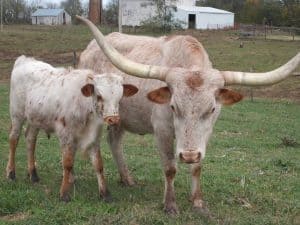 Ashlee with her sweet little calf.

They stopped. Just a few feet ahead of us, they slowed down, trotted past and gave us the once over. “If you are in the field with them every day,” Scott explained, “they know you and just assume you’re supposed to be here.” Every day is another “no exaggeration” comment. When you raise these animals for multiple reasons such as competition, breeding and sales, and meat production, everything matters—weight, horn size, color, disposition, and fertility. Patience, natural and nutritious food, expansive pasture, and continual observation are all key to creating the healthy, happy herd. There are no growth hormones here, no “fattening up with feed” or heavy-handed antibiotics. These “custom cows” are the product of simple TLC and sound genetics. And this is one big reason Texas Longhorns are not mass produced in the same way cattle in factory farms are. There is no get-rich-quick to this. You love it or you don’t. Scott and Dara are smitten.

For Dara, who is a practical, no-nonsense business woman, marriage partner and mother, the love of the life she leads on the farm comes from what it provides, namely clean, healthy food; a sense of individual accomplishment; and a way of living that is both simple and kind–living that gives as much as it takes from the land, the animals and the surrounding community. She and I have spent many market mornings discussing the benefits of organic produce, pasture-raised meat and self-reliance. The Simmons are all about “off the grid”—particularly when it comes to the responsibility for one’s own health. Dara is the person who first introduced me to the benefits of bone broth, long before it was “the new thing” in holistic medicine. 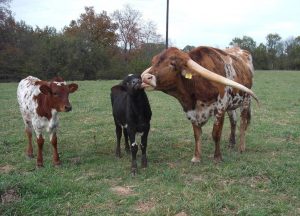 Juicy Do gives her calf a little clean up for the camera.

For Scott the commitment to this life is the romance of the breed itself, I think. He walked us back to the barn where the weened calves are spending some time apart from their moms. Along the way he pointed out the handmade iron feeders he fashioned himself that looked to me like an arts and crafts masterpiece and told us about his plans to expand the pastures and put a new scale in the barn so that more of the necessary care of the cattle can be done on the farm without transporting them elsewhere. “The mothers are out here a lot of the time,” he explained, pointing to an adjacent small pasture. “If the calves can see their mothers, they are less stressed and make a better transition, he explained.” Just an old softie. 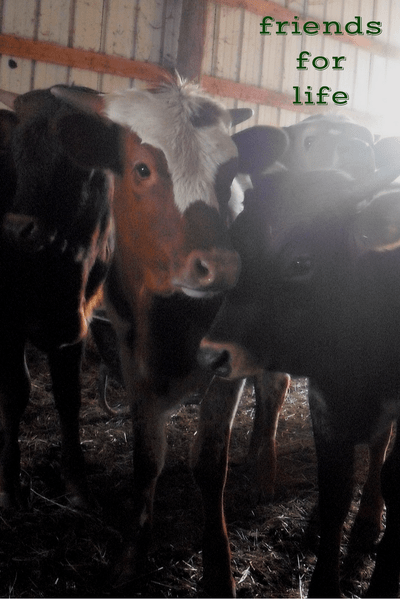 Dara and I took a seat on the edge of one of the feeding troughs in the barn among the youngsters and a group of barn cats that had been tagging along all afternoon. Within a few minutes, the timid calves began to inspect us and allowed us to offer little pats on their heads. “This group of calves will remain friends forever,” Dara said. “They will graze together, watch over each other’s babies—they are very good moms. We have four generations here now.”

Maybe it was the late afternoon sun filtering in through the barn door that created a warm, misty glow, but something made me fall in love, too… with the Longhorns, the pesky cats, the old barn and the rugged beauty of a challenging life well lived and well intentioned.

As they walked us back to our truck, I suddenly thought to ask Dara where the name of the ranch came from. SS Backwards had always seemed a bit strange to me. She chuckled and said, smiling, “Scott bought his first Longhorns before he had a way to bring them home or anywhere to put them once he got them there. He couldn’t resist. That’s kinda backwards, don’t you think?” Well, it did seem to be putting the cart before the bull, but the more I thought about it, the more it felt like something else. Buying those Longhorns when reality told you to do the opposite felt just a bit like faith. And I do believe that faith is a guiding factor at SS Backwards. Yes, faith and romance, along with dedication and respect, are the guiding forces moving SS Backwards Longhorns forward to a bright sustainable future.