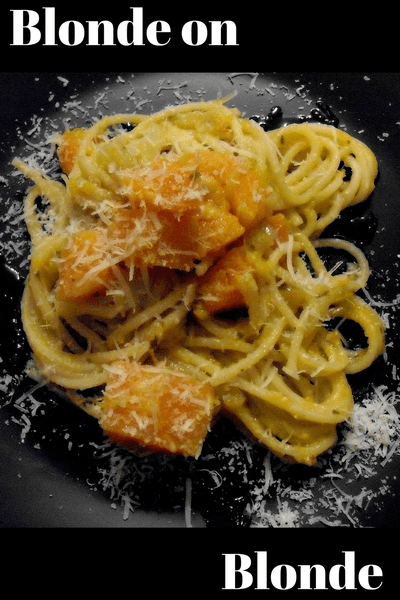 In 1966, I was 10 years old and feeling far more sophisticated than I had any right to feel, tucked away in my room with my little record player (not even a stereo) and the songs that would come to define a generation, like “I Want You,” “Just Like a Woman” and “Visions of Johanna,” all of which appeared on Bob Dylan’s double album Blonde on Blonde, said by many to be one of the most important albums ever produced.

In 2018, I will turn 62, still listening to Dylan and still being moved, transported and inspired by those early masterpieces, from the remastered original recordings to covers by new artists. Believe it or not, when I decided to construct a plant-based main course pasta dish that would also use up the last (sigh) cup of pureed pumpkin from the holidays, my first thoughts were “this is going to be blonde on blonde.” I wondered if it would work—everything was coming out orange and cream, no tomatoes, nothing much Italian, nearly everything local, except olive oil and pasta (nod to Italy) and parmigiana reggiano (double nod to Italy).

While it may not be the dish of a generation, my version of Blonde on Blonde did turn out darn good, if I do say so myself. The more I thought about it, I realized I’d created squash-based monochrome menus before, like Showstopper Squash Bowls with Pumpkin, Lemon and Rosemary Rissotto and Pumpkin and Potato Gratin. These all pair squashes in somewhat unusual ways, giving us opportunity to honor original genius like pumpkin pies and squash soup while creating new classics like this one…

Serving Size: one and one-half cups 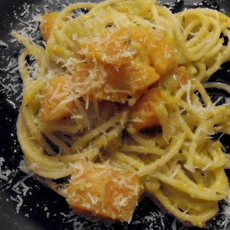 What really makes this dish work is balance, the combination of sweet squash and salty cheese, the touch of creaminess from the almond milk, the pop of acidity from the lemon juice, and heat from the white pepper and splash of pepper oil. You can keep this dish vegan by omitting the cheese, but I advise against it.

Back in the 1960’s, when Bob Dylan and I were just getting started on who we would become (OK, It does take balls to write a phrase like that, doesn’t it?), something else was finding a new place in the world: vegetarianism. And though this lifestyle option has gone in and out of fashion for literally centuries, it’s on a comeback today, both as a way to eat healthier and as a way to live greener. For most people, a vegetarian diet is more of a frequent food choice option rather than a strict regime, but even small changes—like a meatless Monday—can improve our health and the health of the environment.

Check out the cool timeline provided by Delicious Living Magazine in their article on “The Plant-Based Movement” and see how us old hippies learned to love our veggies…and how you can, too.