Breaking the Rules with a Quinoa Breakfast Bowl 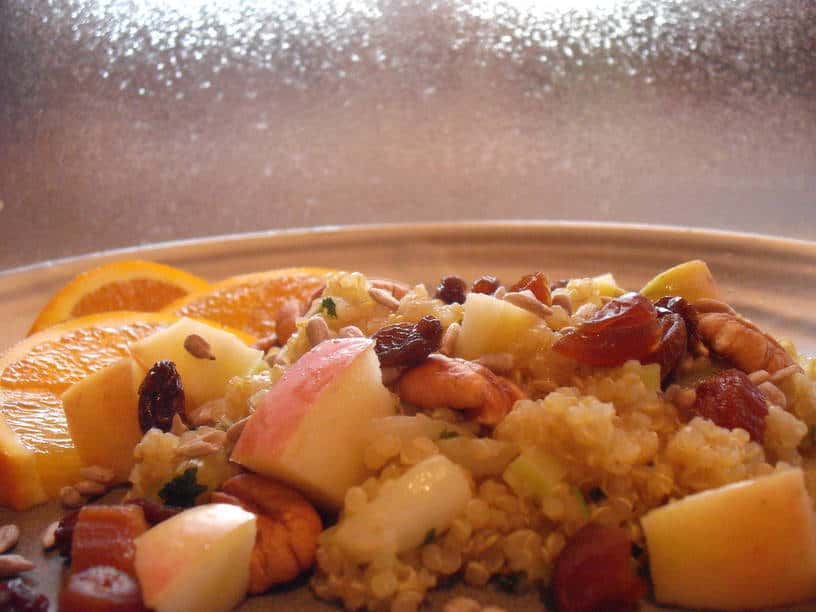 When my daughter was in elementary school, we spent more mornings than I care to admit in a heated battle over breakfast. I was insistent that she eat a “good” breakfast, maintaining that breakfast was truly the most important meal of the day. She, on the other hand, just didn’t like it. The only way to get her to eat anything was to coax her with last night’s warmed-over pizza or traditional PB&J on an English muffin or, when all else failed, a bowl of Ramen noodles or potato soup. To my way of thinking, this was not breakfast. Where was the oatmeal, the scrambled eggs and bacon, the pancakes I was willing to make from scratch, the high-priced cereal every other kid just had to have? Why was she not a good breakfast eater?

Well, in reality she was a great little breakfast eater, perhaps better than her mother. It wasn’t breakfast she detested; it was the menu. Heather has taught me many things over the years (Children do have a way of doing that.). But one of the most important lessons was about food, about breaking the established rules to make the meal suite the person rather than the tradition and coming up with something delicious, incredibly low-sugar (For instance, compare black beans and scrambled egg on a sprouted tortilla to a cinnamon roll.), and usually full of protein for that starter meal of the day.

So my daughter Heather is the inspiration for this week’s post: Quinoa Breakfast Bowls, which actually could work for lunch or light dinner, just as well. We both like quinoa for the base of this recipe because we are both vegetarians, and quinoa is a complete protein, meaning it contains all nine essential amino acids in fairly equal amounts. These are the nine essential amino acids people cannot produce on their own and must get from the foods they eat. While most animal protein sources such as meat and eggs contain complete sets, few plant sources offer all nine. Quinoa is an exception. Further, it is super easy to prepare—cooks just like rice—and has a mild, nutty flavor that can be used in a million different ways (including chocolate cake…not kidding).

Of course, if you read this blog from time to time, you already know I’m a big quinoa fan. However, if you have been reluctant to try cooking with this ancient grass or if you’ve tried it but found it not to your liking, you might want to give it one more go. We are in the Lenten season, after all, so many of us are searching for meatless Friday meals, anyway. And this one is perfect for several reasons: easy to make, flexible ingredients and reheats well to make yummy and quick leftovers. In fact, this recipe is more like an outline that gives you the freedom to cook with the season and use what you have on  hand, including ingredients you like and leaving out the ones you don’t like—just as Heather would have it. You’ll find ideas for variations, as we go. So there’s no excuse for skipping that most important meal of the day, is there… when you set your own rules?

Pretty easy and flexible, huh? But what about that protein. I have many friends who would like to eat more vegetarian meals during an average week, and some of their teens are interested in exploring a vegan lifestyle. So they have lots of concerns and questions about maintaining nutrition when they give up meat and dairy. Maybe you are among them and have had your fair share of false starts and downright culinary disasters. So here’s some guidance….

Delicious Living Magazine has just posted two great articles on going vegan. One is a shoppers’ guide to making sure you are not giving up nutrients along with animal products. It discusses The Four Nutrients Vegans Needs. The other article gives advice on How to Support Your Vegan Teen, offering ways to keep the house stocked with healthy quick vegan foods and tips on how to incorporate vegan options into the family meal plan without creating custom menus for everyone.

You know, I have been a vegetarian for well over 20 years, and I’m still pretty healthy. But I have never thought that eating animals (those humanly raised and harvested) is wrong. In fact, I cook healthy, local meat all the time for friends and family and have blogged about the green choice of supporting local livestock producers. I’ve also been fascinated for years with the rituals and spirituality behind Lent and have blogged about it, too (a post that also includes a quinoa recipe, coincidentally), even though I’m not what anyone would consider religious and spend next to zero time in a traditional church. Vegetarianism and Lent, however, just seem to fit my lifestyle. We can make our lives so difficult by adhering to rules that just don’t work in any sort of significant way in our lives, so I think it can be very healthy to know when to let some of them go. Kind of the way my daughter lets potato soup be a breakfast food.