Close to Home for the Holidays: Persimmon Snickerdoodles and Sweet-Hot Nuts 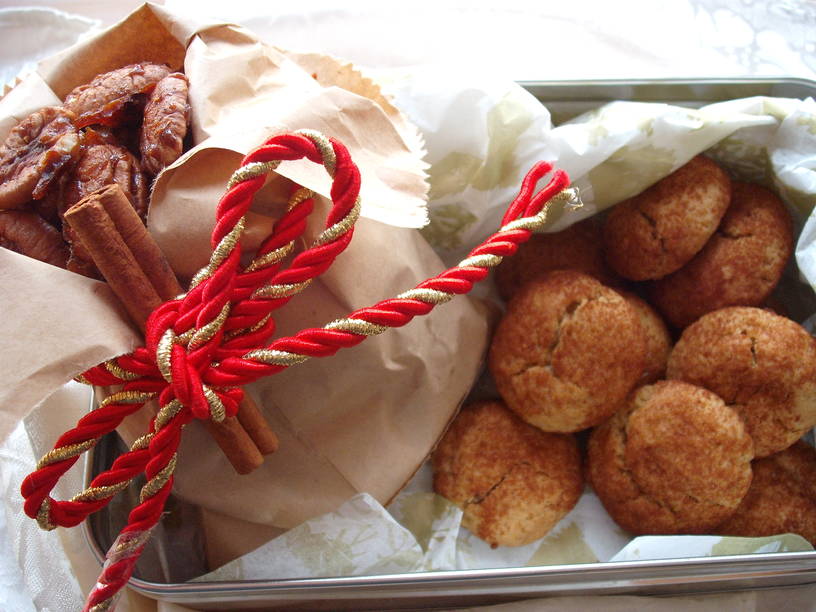 I really have a very short gift list for the holidays, and most of what I give is food I’ve made or bought locally to share. So I love it when what I have to give is something a little special, something unexpected. That’s how I feel about my Persimmon Snickerdoodles and Sweet n’ Hot Nut Mix, both of which draw most of their ingredients from local food.

The magic in my persimmon cookies began at dawn on a frosty morning when I went out with my neighbor Travis to hunt for the bright orange treasures. Travis is young man, but he is an old soul, full of wisdom about food, folklore, nature and kinship. I would wager Travis will never go hungry—even in an apocalyptic disaster, he will always be able to put his family first and offer help, sustenance or friendship to anyone in need. Yes, we need more people like Travis in the world. 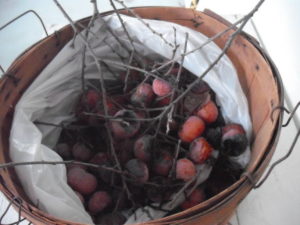 Ripened to perfection, persimmons don’t look all that appetizing, but they are super sweet and syrupy inside. Thank goodness Travis was leading the way.

And, persimmons were part of my childhood growing up in my grandma’s kitchen. She made persimmon preserves, I’m pretty sure, and probably a lot of other persimmon dishes I never bothered to ask about. I just ate anything that seemed like a pie or a cake, no questions asked. I do remember picking them up off the ground with her and my grandpa, being fairly cold during harvest, and being told not to eat any until she’d tested them to see if they were really ripe—only once did I not listen and only once did I have a mouth that felt like sandpaper and steel wool for several hours.

Travis had been watching the frost levels for a while, and he hit it just right that last week in November. The persimmons we picked were perfect, syrupy sweet and slightly squishy orbs with the cute little signature “hats” on top.

When all was said and done, I had four brimming cups of pulp, ready for anything from pies, to puddings, to cakes. But since it is Christmas and since I do have several people on my list getting an official Green Gal Christmas Box just like last year, I wanted to make cookies—ones that would withstand shipment. Mine are based on everyone’s favorite: the snickerdoodle, a buttery, short sugar cookie that is rolled in cinnamon and sugar prior to baking.

The persimmon inspiration and minor changes come from an old cookbook on persimmons lent to me by my friend Deb. I replaced one of the eggs with persimmon puree, substituted powdered sugar for some of the typical granulated and created the cinnamon-sugar coating with brown sugar instead of white sugar. If you don’t have persimmons, I’m thinking sweet potato puree might work just as well or even, perhaps, pumpkin or peach, if you have some peaches in the freezer. The taste will be different—NOTHING tastes like a persimmon—but close. If all else fails, you can always resort to the traditional snickerdoodle!

It is also important to note that I used native North American persimmons, not the Asian species Diospyros kaki, which is what you would mostly likely encounter in the grocery store. The Asian species will not work here. To learn more about persimmon varieties, visit the CUESA website.

One thing I noticed in researching snickerdoodles, is controversy (Who knew!). It seems there are two camps of snickerdoodlers—one in favor of adding vanilla to the cookie dough and one staunchly opposed, claiming the vanilla deactivates the power of the cream of tartar, which is critical to the snickerdoodle’s signature “puff.” As a definitive resource, I turned to my trusted Joy of Cooking. No vanilla. Good enough for me. 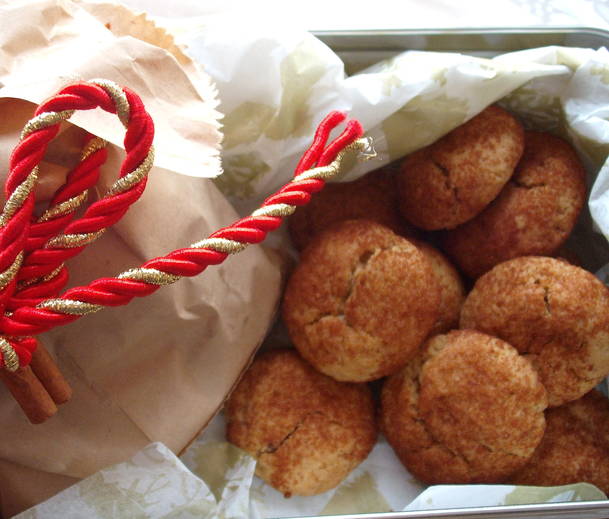 Note that the cook time indicates the entire baking time for the 4 dozen cookies, assuming 12-14 minutes per batch. I rotated my baking sheet halfway through baking each batch.

Another local treat that will be featured in the Green Gal Christmas Box this year is seasoned nuts—locally grown pecans from Cooley Farms and chestnuts gathered by Travis. Many months ago our friends Frank and Rosi Biver of Biver Farms gave us some partially dried hot peppers, mostly ghost peppers. “See what you can do with these,” Frank said and winked at me. Well, that sounded like a challenge to me. So I continued drying them out over several months, and last week I crumbled them up, ground them into powder in a spice grinder (which is still airing out, BTW!) and combined them with some other choice ingredients, like my friend John’s honey and my CSA farmer Bruce Haas’ signature garlic powder and made what I lovingly refer to as Frank, Bruce and John’s Sweet Hot Nuts. Makes ‘em blush every time I say it.

If you don’t have a source for your ground chili peppers and fresh garlic powder as I do, check out Penzey’s Spices. They have a wide assortment of pure (no salt added) chili and garlic powders with varying degrees of intensity. 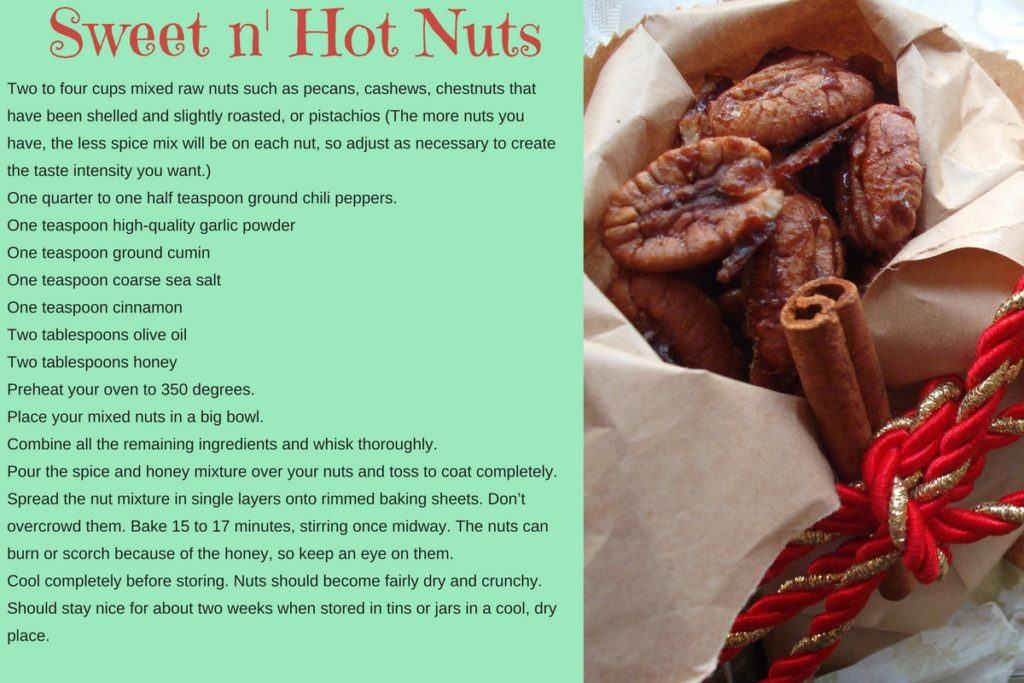 So what’s in your Christmas Boxes for 2016? Would love to have a peek. 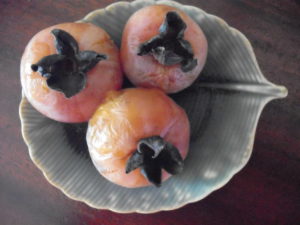 Aren’t these just the cutest little persimmons you ever saw? They were picked by my friend Deb on a bike ride earlier this fall. They were her “first sighting.” And while they are lovely to look at and represent future richness and bounty, they have not reached their full potential to give sustenance. When they mature a bit, when they develop a few wrinkles and brown spots, when their inner richness grows softer and sweeter over time, they will increase in value. It’s amazing what you can learn picking persimmons.