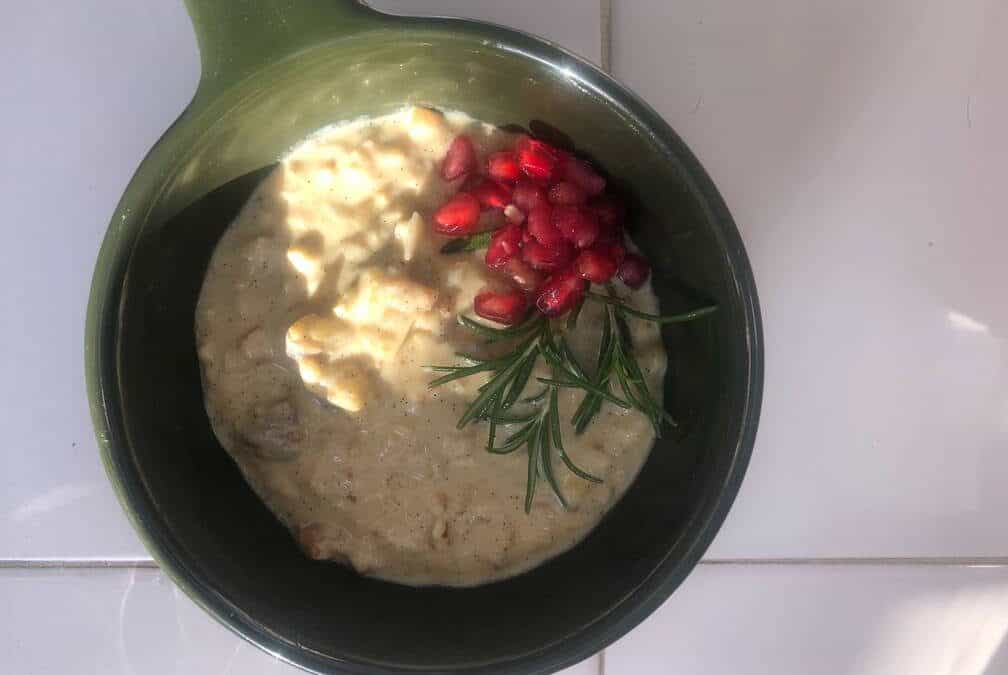 Long ago, when my daughter was in grade school and my grandma lived with us out in the country, I used to make this rice pudding dish. The original version came from a way-back issue of Cooking Light Magazine and involved a lot of low-fat ingredients that I would not be using today. But we loved it—all of us—even Grandma, who was not a rice fancier. This dish was meant as a dessert, rather a decadent one, even by Cooking Light standards, but the enticement of warm rice pudding on a cold December day made this a special weekend breakfast treat in our house. Even if I added the optional amaretto liquor!

And while the original recipe has long gone by the wayside, the warm rice pudding dish has remained and has gone through a million variations. For this post, I’m giving you an extra-special version that is perfect for winter holidays and can be served hot or cold, for party buffets, sit-down dinners and… yes…even breakfast! Come on…it’s Christmas/Hannukah/Kwanza/the Winter Solstice…take your pick and pick up your spoon to dive in. Rice, after all, is a nearly universal food, honored in many cultures. So let’s make it extra special.

So a couple of brownie points for this dish: you can use up any leftover plain rice—just avoid rice that has been seasoned for savory dishes—and you can make this dish way ahead—even if you want it warm to serve. Just store in the fridge and reheat gently, either on the stovetop or in a low temp oven. You’ll need to stir well to bring this dish back to its original cream consistency, but it will happen. Be brave.

I make a lot of coconut rice—it’s probably my favorite rice recipe no matter what’s on the menu—from curries, to desserts to casseroles. It makes spectacular rice pudding, as in the recipe above. And here is how I make it: 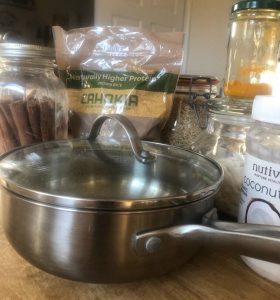 Start by heating over medium-high heat two heaping tablespoons of coconut oil in a heavy saucepan with a tight-fitting glass lid. Add a big dash of turmeric to bloom in the oil.

Add your rice—for two cups finished rice, add one cup of dry rice. Stir constantly with a wooden spoon so that the coconut oil completely coats all the rice grains.  Sprinkle in a dash of coarse sea salt, about a half cup large-flake unsweetened coconut and a chunk of Ceylon cinnamon stick, still stirring until it all becomes aromatic.

Turn up the heat to high and pour in two cups of room-temperature water all at once—it will spurt and sputter! Give it one quick stir and cover quickly and tightly. When you see the boil become rapid and strong, reduce the heat to low and leave the rice alone until it is done, with all the water absorbed. For long-grain brown rice this takes about 45 to 50 minutes. You can lift the lid and peek near the end, but don’t remove the lid before then.  Dragging a wooden spoon from the side of the pot should tell you if the pot is dry.

Once all the water is absorbed and the bottom of the pan is dry, your rice is done—just remove the cinnamon stick before serving. However, I like to take this one step further—I spread the rice out on a parchment paper-lined rimmed baking sheet in a very thin layer and quickly chill it in the refrigerator for a couple hours. This process assures a beautiful texture and keeps the integrity of the individual rice grain. Just reheat in whatever dish you are making. This technique is especially important for the pudding recipe above.

So make up a bunch of coconut rice and reserve your two cups for pudding…for dessert…for breakfast. Be brave!

Rice is so nice–and if you are looking for other recipes, try my Vegan Red Beans and Dirty Rice from last year.