Farmer’s Market Number One Rule: Go with the Flow 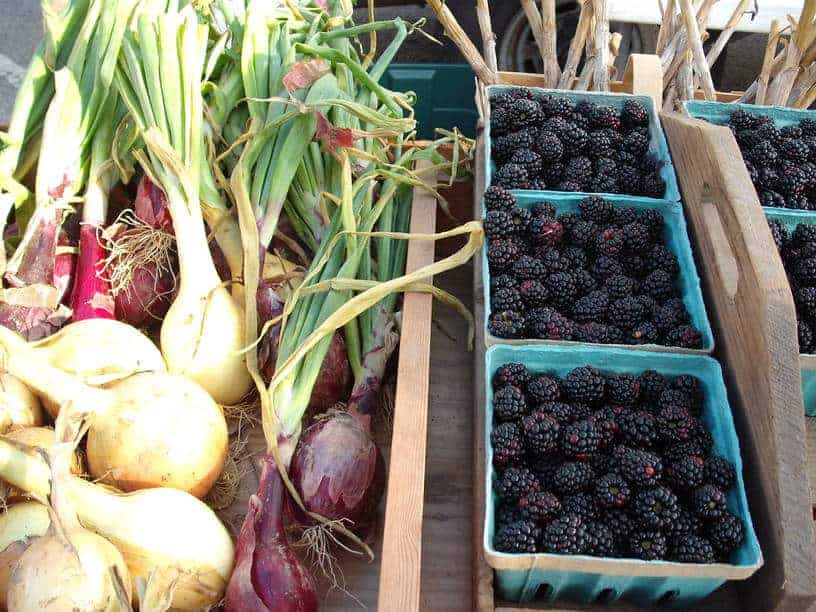 In the June issue of FEAST Magazine, page 44, (Remember, this publication should become a must-read!) there was this awesome recipe for a Mulberry-Cashew Cream Cheesecake. The featured chef was making a point of using local, indigenous ingredients–mulberries. I had to make this dessert, too!

For one thing, the pie just looked sensational, and I was having a small dinner party. Second, my daughter was one of my guests, and Heather is both gluten- and dairy-free. And so is the pie!

Well mulberries might be a nice idea, but they were nowhere to be found when I needed them. The chef had suggested blueberries as a substitution. My market source for blueberries had none that week. But, blackberries were everywhere, and they proved to be a great choice.

This substitution was a pretty simple one, but sometimes the workable switches are not so easy to see. So ask your market growers to help you. They know their produce, but more importantly, after weeks of trips to their booth, they know you—probably know what you’ve been up to in the kitchen and how comfortable you are with culinary experimentation. Being able to carry on this kind of conversation with someone who grows your food is an invaluable and joyful experience, which will save you time and money in the long run—no special trips to stores, no paying outrageous prices for what’s not in season.

So how was that pie? Awesome. The only change I made, other than the berry switch, was to add a bit of salt to the cashew cream. I felt it needed just a bit to balance the rich sweet filling. I did this by using salted raw organic cashews instead of plain ones. This was probably somewhat risky, but it worked. 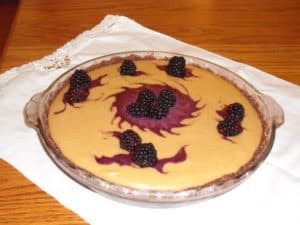 You can find this recipe in the archived issue online, or just read on below:

In the bowl of your food processor, blend the almonds on high until a flourlike consistency has formed. Add figs and almond flour and blend until mixture forms a sticky ball. Grease a glass pie pan with coconut oil. Using your hands, press almond-fig mixture firmly into the base of the pie pan, flattening and expanding as you go until the mixture is evenly distributed to form the crust. Set aside. For the filling:

In the bowl of your food processor, blend cashews (again, I chopped up just a little first.) until a fine-powder consistency has formed. Add ¾ cup honey, lemon juice, vanilla extract and coconut oil to processor and process on high until smooth and creamy. (This took me two batches, since my processor bowl is small.)

Divide the cashew-cream mixture in half, reserving half in a small bowl and leaving remaining half in the bowl of the processor. Add two cups of berries to the mixture in the processor and continue to blend on high until creamy. Remove a half cup of the berry mixture to another small bowl. Set aside.

Using a toothpick, slowly move the berry mixture on top from the center of the cake to the edge in a swirling motion. Drizzle remaining two tablespoons of honey on top of the cake and garnish with remaining cup of berries.

Cover and refrigerate for at least one hour. (I found that chilling overnight yielded a better consistency for serving.). Definitely serve chilled.

Those blackberries were so wonderful that, of course, I bought extra. Berries freeze incredibly well and they make great stars in dishes way outside the dessert box—like salads. 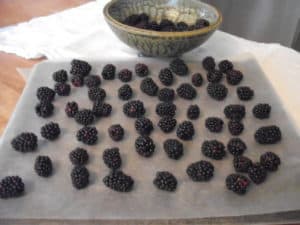 Berries are usually ready to throw in a dated freezer bag in a couple of hours.

I washed all the extra berries and let them dry on paper towels on the kitchen counter. I transferred half the berries to a waxed paper-lined baking sheet and placed in my freezer. Freezing the berries separately before dropping them in your freezer bag means you will be able to take them out separately, using only what you need, instead of the berries freezing together in a big clump.

The rest of the berries—about a half cup—were used to top a wilted greens salad. Here’s how I did it: Start with a cup of chopped kale leaves (tough stems removed) and two cups of roughly torn spinach leaves. Add some thinly sliced red onion (I used a mandolin. Me and the mandolin—we did not start out as friends. I’ll tell you about it sometime.), about a quarter cup and some chopped broccoli, about a half cup. Wilt this healthy mixture in a large bowl, using a dressing of the following:

After about 15 minutes, plate the greens and top with dry toasted walnuts, a spoonful of good goat cheese and those blackberries. Simple, nutritious and impressive… but not hard! 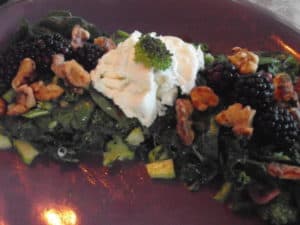 I chose to serve the salad on some deep purple plates, which enhanced the presentation. Candlelight didn’t hurt either.

What’s your favorite berry recipe? What innovative substitutions have you conjured up?