Feast and Famine, Waste and Want 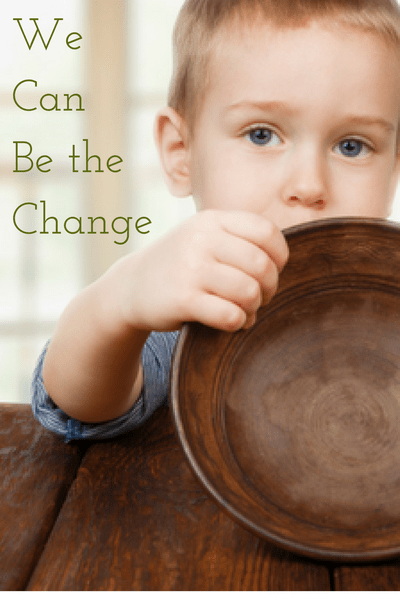 In March of 2016, I wrote a post called Ugly Vegetables and Fruits: Could they be the new chic?. This was my first serious post about the growing problem of food waste in the U.S.A. Then last Christmas, I went a little “out there” with a fictional story called A Pocket Full of Dreams…It was Christmas…. 1965, in which a man is left in charge of his six nieces and nephews for a day but finds there was little in the house to eat. Both posts—one based solely in sad reality and the other a retelling of a magical childhood memory from my dearest friend Deb—speak to the realities and perceptions of hunger, its pervasive persistence in this wealthy country and how its solution is linked more than anything else to our gratitude and value for what we have and what we hold dear.

Delicious Living Magazine authors Lisa Truesdale and Jenna Blumenfeld recently wrote a series of articles about hunger in the U.S. Their research and resources make one thing perfectly clear: there are two main barriers that stand in the way of healthy food for all: lack of access to good food (either because of geography or lack of funds) and careless waste of good, plentiful food (by individuals, the US government and the commercial food industry). Inaccessibility and Waste are nearly inseparable partners in crime.

While the entire texts of these articles are well worth the read (What causes food insecurity?; Why food access is beyond reach for some (and what you can do about it); 5 ways to fight food insecurity), here are just a few startling statistics to get you thinking:

Truesdale reports: “According to the USDA, more than 23 million people in the United States live in a food desert—a census tract, normally a low-income one, where at least 500 people or 33 percent of the tract’s population reside more than one mile from a supermarket or large grocery store that offers affordable, healthy, fresh food options. Many of the residents of these neighborhoods also lack reliable transportation to get to a large store; faced with the option of not eating at all, they often turn to convenience stores, small corner markets and fast-food restaurants and end up paying higher prices for less-healthy options like fatty and salty processed foods.” 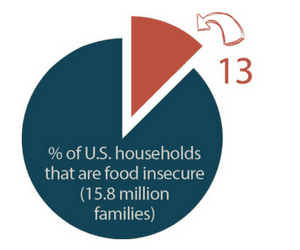 Couple the problem of food deserts with the two related factors of poverty-creating government policy and gender inequality, and suddenly the mystery of hunger in America becomes a bit clearer. According to Blumenfeld, “Insufficient income to regularly buy food is the leading cause of food insecurity. It prevents families from accessing enough food or healthy food. Governmental policy allows junk food made with high-fructose corn sugar and refined commodity crops to be less expensive than fresh fruits and vegetables.” Further, Blumenfeld notes that “according to the USDA, 10.5 percent of households headed by a single woman were food insecure in 2016. Pew Research Center recently reported that women earn 83 percent of what men earn on the dollar.” 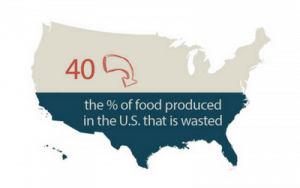 Truesdale has found that while “fifty million Americans are food insecure,… an estimated 40 percent of all food produced in the United States is wasted,” according to Food Shift, a California-based nonprofit with a bold mission to reduce waste and increase access to nutritious food. ‘Food waste is destructive to the environment and to the health of our communities,’ says Dana Frasz, who launched Food Shift in 2012.”

“Food Shift recently opened The Food Shift Kitchen near San Francisco; Frasz describes it as an innovative social enterprise that uses cosmetically imperfect produce to create nourishing meals for the community, while also providing on-the-job culinary training to individuals with barriers to employment. ‘We believe that by trimming waste and diverting food loss, we can not only fight hunger, but also create jobs, combat climate change, conserve natural resources and cultivate more sustainable communities,’ Frasz adds.”

Blumenfeld also cites ways the government could change policy that would go a long way in solving the hunger problem:

But the biggest impact will not come from big government or the commercial food industry. It will come from you and me, the consumers. Here are five ways to fight food insecurity offered by Truesdale that are totally achievable. And even if you only accomplish some of them, you become part of a larger solution that benefits everyone.

1. Be a food-waste warrior. Sign Food Shift’s “Pledge to Reduce Food Waste” at Food Shift and then implement some of the suggested strategies such as properly storing produce to avoid spoilage, eating older food and leftovers first, and sharing food with friends. “Each time food is wasted, all the resources that went into producing, processing, packaging and transporting that food are wasted, too,” says Dana Frasz, founder of Food Shift. The website’s “Reduce Your Waste” page offers even more detailed guidance for reducing waste; taking small steps in your own home also leads to lower grocery bills and a smaller carbon footprint.
2. Donate what you can. Feeding America is a large network of food banks, food pantries and meal programs around the country. The site has a tool that lets you plug in your ZIP code to find organizations in your area that need donations of food and funds.
3. Volunteer your time. Food-relief organizations need your help, and not just during the holidays. Just a few hours spent sorting and packing food donations can help immensely; many of these organizations also need volunteer drivers, educators and office help. Sign up with a big group of family and friends for an even bigger impact. Now wouldn’t that be a fun way to spend Christmas Eve!
4. Harness your consumer power. While patronizing your favorite local restaurants and food retailers, ask if they participate in programs to donate their excess still-edible food rather than throw it away. Business owners were once leery of donating food for fear of liability if it harmed anyone, but the 1996 Bill Emerson Good Samaritan Food Donation Act protects good-faith food donors. (If they’re still worried about it, direct them to gpo.gov, which has a link to the full wording of the legislation.)
5. Make your voice heard. FeedingAmerica.org also has an advocacy page with tips on what to write or say to your elected officials about why they should support legislation and policies. There’s even a form letter already prepared that you can personalize and send with just a few clicks. After you contact the policymakers, share your experience on social media to encourage friends and family to do the same.

May the bountiful blessings of this season touch you and yours. And may we all touch each other—even ever so slightly—with a warm smile, a cup of coffee, a cookie, an invitation to dinner, a donation, a volunteered hour or a well-placed letter to the editor in our local paper. We can be the change. In gratitude.