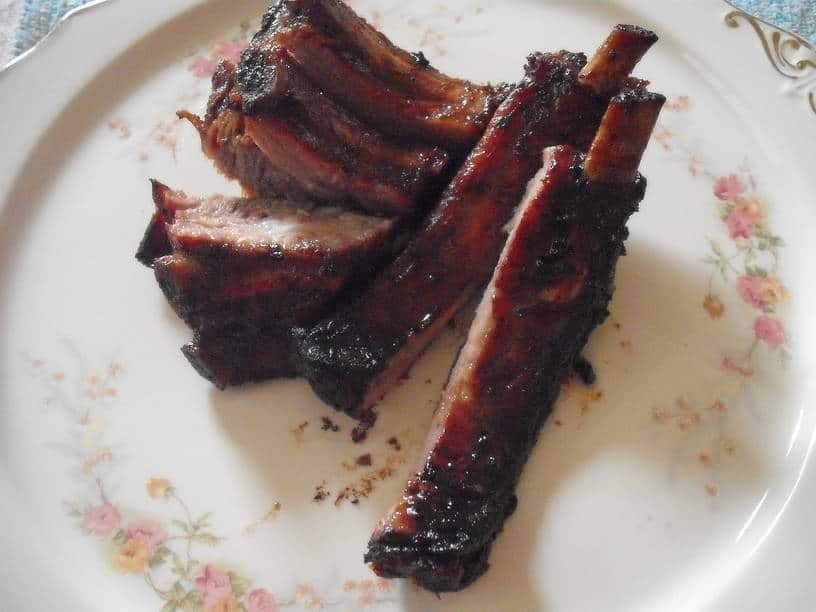 So ribs. Can you say vegetarian challenge! But Don was not going to let the Green Gal spotlight on pork go out without a starring role for ribs. Be brave, right? And here’s what I came up with… Brined baby back ribs that are slow-roasted in the oven and slathered with a sticky sweet and spicy glaze. Not bragging or anything, but not bad for a vegetarian.

One of the biggest hurdles I see to creating moist and juicy ribs is how easily they can dry out and become tough while they cook. I decided on brining the ribs after consulting several expert blogs and websites. Scott Thomas of The Grillin’ Fools convinced me it was worth the time and effort to brine before roasting. And then came the creativity when he pointed out that brine doesn’t have to be just water and salt…. What about beer and spices?!

The next big decision was how to cook them—in the oven or on the grill. Everything I read said it was going to be easier and I was going to have more control roasting in the oven rather than trying to slow grill out on the porch. I chose the oven, and given that I don’t eat meat and can feel very insecure making meat dishes, this was the right decision. Brave but not reckless. If you would like to be braver than I… go for it and let us know how things grill out!

As with a lot of my recipes, one of the ingredients in my sauce was “made” not just plucked off the pantry shelf. It’s a super-simple ginger sauce that comes from my Anne Somerville Fields of Greens cookbook. This is one of my go-to favorites to keep in my frig for whenever I need to add a sweet-salty Asian twist to something…anything from salad dressings to meat marinades to soups.

To be honest, I used to get upset with the great chefs on my bookshelves for creating dishes that forced me to make an extra “dish” in order to complete the one I had originally intended to make. But not anymore—fresh and homemade takes time, but well worth it. And isn’t it great to reach in your frig and pull out something extra special for that meal you’ve got to make in a hurry? Somerville’s versatile, long-lasting ginger sauce is a perfect example of why I’m OK with a little more work in the kitchen. Here is her recipe:

Combine everything except the cornstarch and quarter-cup cold water in a small sauce pan; simmer over medium heat for 10 minutes. Dissolve the cornstarch in the cold water and whisk the mixture into the sauce. Bring the sauce to a quick boil for one minute, whisking constantly. The cornstarch will bind to the sauce ever so slightly and give it a silky texture (This is so true!!). Remove from heat and cool, allowing the ginger to steep in the sauce until you are ready to store it. Strain out the ginger and store the sauce in a sealed jar in the refrigerator. It keeps for several weeks.

Just like my Apple Jack Pulled Pork, the Ginger and Beer Baby Backs were a big hit. I took both dishes to my weekly CSA dinner out at Biver Farm and watched them rapidly disappear. I felt incredibly good about my offering, not just because I felt I’d done a good job in the kitchen but more importantly because Blaine Bilyeu, the owner of Papa’s Pasture who raised the meat, had done an outstanding job. I am totally convinced that the nutritional value of the meat and its obviously delicious taste are intricately tied to how her hogs are raised, with humane care, sustainable practices and pride for her family farm. You can order Blaine’s pork online with a couple of options for pickup or find her at the Goshen Community Market in Edwardsville, which has added a once-a-month winter market beginning November 18. Blaine and I will see you there!