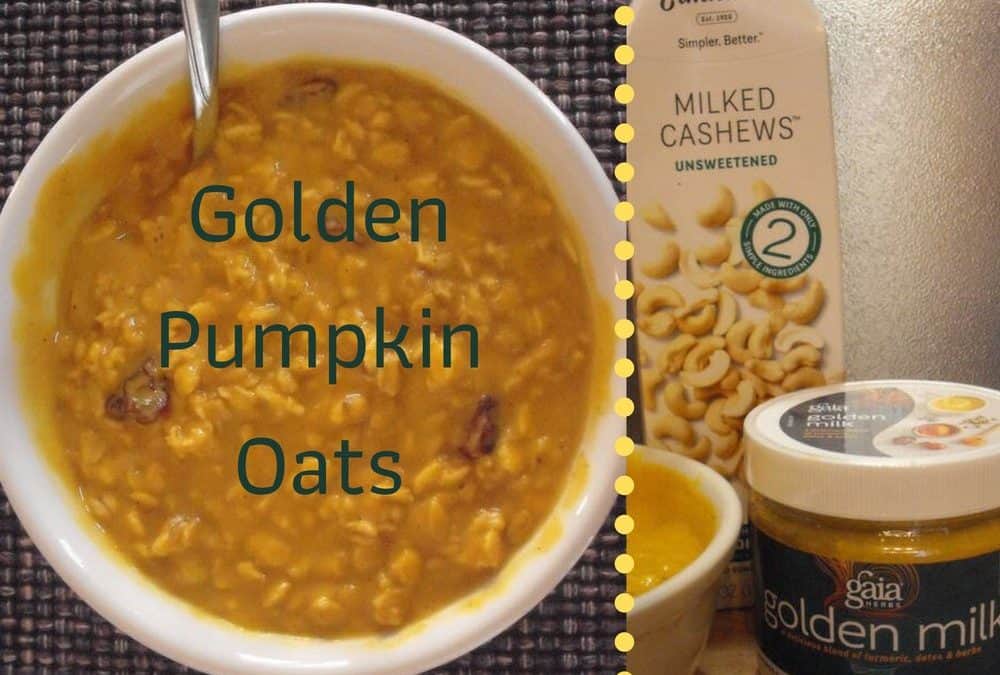 This recipe began as many of my recipes do–with a leftover. In this case, I had an extra quarter-cup of pumpkin puree with nowhere to go. You see, you can’t buy a two-cup pumpkin for your pie—you buy a pumpkin, roast, puree, strain and measure. Being one of the best food values going, an average pumpkin will yield up to 10 cups of puree. Really, one nice-sized pumpkin is all you need for cookies, pies, soups and cakes during the holiday months. But sometimes, there’s a little bit extra.

Staring at my quarter cup and vowing not to waste it, I decided to just throw it into the morning oatmeal, but then…I was inspired…by the New Hope Network Blogger Box! Not exaggerating one bit here, two of my all-time favorite New Hope Network Blogger Box items are Elmhurst Cashew Milk and Gaia Herb Golden Milk Powder. I use them at least once a week all winter to make a splendid turmeric-laced cup of comfort. I’ve even enhanced my original version of this healthy warm drink by steeping it with a mixture of my own herbs and spices.

And then, I decided to take it to another level by developing Golden Pumpkin Oats. After a couple of tries I had it just where I wanted it to be. I think it will become a favorite on your winter breakfast table, too. Fairly quick to prepare, incredibly wholesome and warm. Enjoy the golden glow!

(Makes about one cup that will keep indefinitely in a jar with a tight lid that is stored in a dark cool spot.)
You need about an eighth of a cup of the following spices and herbs, which you can adjust to suit your own tastes:

Good News! I just learned in my Sierra Club Magazine that Elmhurst has expanded their line of nut beverages to include a variety of hemp creamers—there’s even a golden milk favor. Yeah! It’s on my shopping list. How about you?