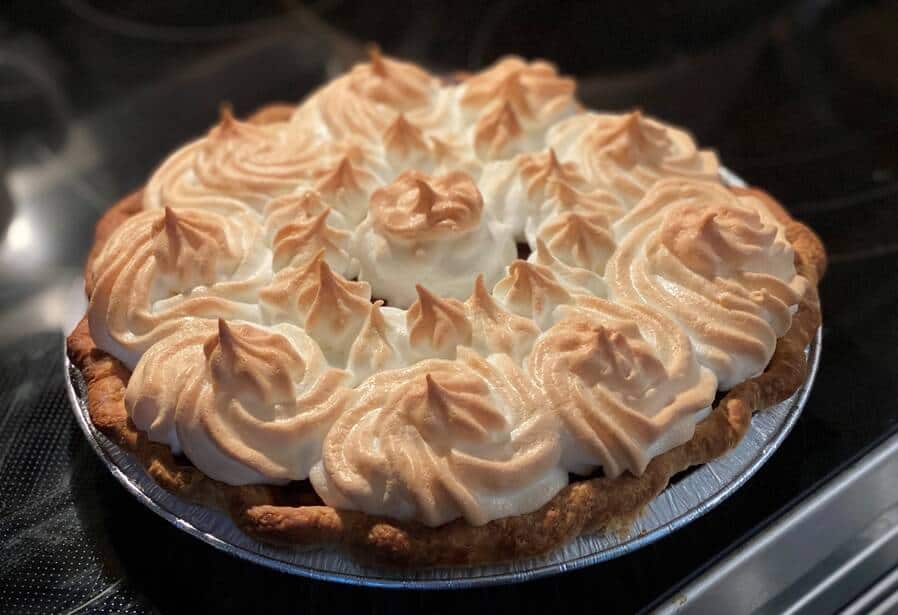 Even after many years, I still miss my grandma. I am as old now as she was when I was a little girl living in her house. That is just so hard for me to fathom. My grandma left this world on June 10, 1993, the year of a great flood where I live. Several similar floods have followed, some of my own lonely tears. Yet, every day, to greater or lesser degrees, she enters my thoughts, becomes so real sometimes I am sure I feel her hand on my shoulder. Making food that she made, food that I remember growing up in her kitchen is important to me—makes me feel close, allows me to talk about her, to laugh, and also to cry just a little bit. It’s all good in the end.

Her chocolate custard pie was one of my favorite desserts. Her pie tasted old fashioned, not too sweet, with big chocolate flavor and a traditional flaky crust—none of the graham cracker nonsense. The pie was baked, so not a cream or chiffon pie—rich custard that couldn’t have come from a box, if you know what I mean.

Of course, to truly duplicate her pie is impossible because Grandma never wrote anything down—some smudged notes maybe, tucked in corners of drawers, but no complete recipes. Further, I keep remembering ingredients that seem to have been part of this dish—like evaporated milk. I was pretty taken with Elsie the Borden Cow who smiled from the middle of a daisy on the can—but I can’t be sure. Elsie actually appears on Sweetened Condensed Milk, which is something else entirely. Carnation, I’m sure, was the evaporated milk. Mystery still lingers.

And I KNOW that my grandma’s pie crust was at least partially made with lard and later with Crisco. Oh my. While I can see (and have used) lard, Crisco is not part of my kitchen inventory–ever. Earth Balance Original Coconut Spread, which wasn’t even around when I was a kid, is my answer to the lard/Crisco dilemma. And I LOVE it—for pie crusts, scones, cookies, anytime all-butter richness is not exactly what you want. Strongly recommend it!

All said and done, I think any pie I make now is part Grandma and part me, which, when you think about it, is exactly how I remember things in her kitchen—she made it my place as much as hers, even though I contributed very little.

The Search for Grandma’s Pie…begins with friendship

I was determined to bake Grandma’s pie, but I needed help—someone with experience who could sift through ingredient possibilities and offer guidance. There was only one person to ask: I invited Jane Davidson Zappia of Pop’s Pies to weigh in on what I was remembering. She and I began texting, phone chatting and emailing for a couple weeks, debating ingredients, experimenting with cooking temps and times—just like America’s Test Kitchen! So this pie is mainly Jane’s pie—the pie professional here! But it is also most certainly Grandma’s. She must have heard us chattering away, smelled our experiments and sent us her love to carry us through.

You’ll note that the final pie in the recipe is topped with Jane’s beautiful meringue, which I’m sure is exactly how Grandma topped her chocolate pies. But the meringue can be a bit intimidating, if you are new to pastry techniques. So I have another option for you: I have made a much simpler whipped cream topping, although still from scratch so don’t even THINK about reaching for that dastardly plastic tub. You’ll find the whipped cream possibility at the end of the post. Grandma always made her own whipped cream, and so do I and so should everyone!

But before we all begin cracking those eggs, I think reviewing “Mise en Place,” is a good idea. This French term means “ready in place,” a way to set up your kitchen so that recipes such as this pie that require some precise timing from one step to another go smoothly. My grandma seemed to sail through her recipes without any concerns—the comfort that comes from years of experience—to which Jane can relate. But if this pie is new to you or something you don’t make often (I certainly don’t.), the timing of the process to get it mixed, assembled and baked, while holding temperature correctly can seem daunting. The key is Mise en Place–having everything ready and in place for each step in your recipe. So let me, Jane and Grandma lead you through…. We start by being brave….

Serving Size: one slice, about an eighth of the pie

The prep time above includes making, chilling and freezing the pie dough, as well as setting out the eggs for room temperature and combining all the filling ingredients. The cook time is the total time to blind bake, which is 20 minutes, and bake the entire pie, which is 45 minutes.

What If Meringue Is Just Too Overwhelming??

Okay, meringue is what my grandma would do and what Jane executes beautifully, but I get it…barely time to bake this pie and then you need to get out clean mixers and a clean bowl at the end of the whole process only to pull that hot pie in and out of the oven, quickly top the pie and watch like a hawk for over-browning or browning too little? Not happening for you? I have a three-word answer: Homemade Whipped Cream. Ahhhh….much less work, totally elegant and sure to garner just as many compliments. Perhaps try this….

My Whipped Cream Topping with Toasted Nuts and Chocolate Curls 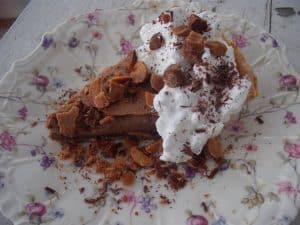 Using a deep glass bowl and a balloon whisk (or hand-held electric mixer), beat the cream until it is thick and patterns appear as you beat. Add the sugar and amaretto and continue beating until the whipped creams is where you want it, sturdy enough to pile on the pie.

Once the pie has completely cooled, top cut slices with the whipped cream and sprinkle with chocolate shavings and chopped nuts.

This is all wonderful, but….you just want the pie without the work!

Still can’t swing this pie, but really want a slice RIGHT NOW? Two words: Pop’s Pies. Yep. If you are really into pie but not into baking, Jane can do it all for you. Ordering is easy and delivery within the Edwardsville-Glen Carbon area is an option.  Jane offers high-quality, wholesome, sweet and savory pies, and enjoys the journey of imagination that goes into every design she creates. You can view her pie gallery and order pies by visiting popspiesjz.net.