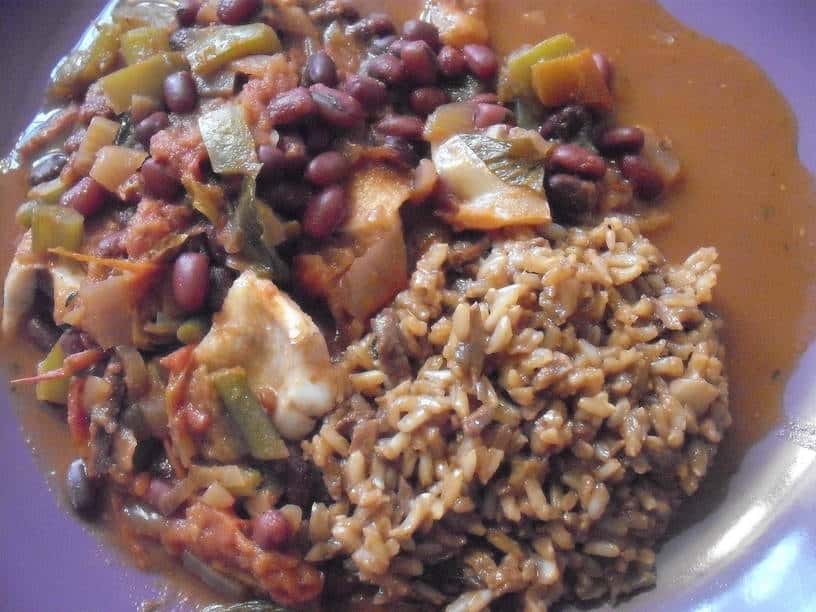 Don and I have only made one brief trip to the fabled French Quarter, but we loved the history, the cultures and the food…especially that Cajun and Creole cooking! The Louisiana city simmers with beauty and sizzles with passion. The traditional dishes are seasoned with myriad cultures—African, French, Native American, Spanish, and Caribbean.

As far as I can tell from a bit of research, the differences between Creole and Cajun cooking are about location—city folk vs country folk—and countries of origin—mainly French and Spanish compared to French Canadian. But the mix has multiplied many times, with the slave trade and immigration over time. Lines blurred and recipes, I’m thinking, blended. I know there are people in Louisiana who would have my head if they were reading this because folks in the Big Easy are not so easy-going when you use Creole and Cajun interchangeably in the kitchen. They can get pretty precise when it comes to these two culinary approaches. But I doubt they are reading, so I’m not worried. And here’s a favorite little story to stir the pot…

When I worked in higher education, one of my co-workers was this beautiful woman whose family had deep roots in the Bayou regions of Louisiana and in the famed city of New Orleans. Anisha was stunning in a classical “Cleopatra” way—long cornrows, big eyes, flawless mocha skin. The colors she wore flowed around her, creating this festival wherever she went. Anisha was the one person who looked me square in the eye one day and said, “Toni. You got frizzy hair, and you need to stop treating it like a white girl’s. Embrace it!” Then she suggested some oil. I’ve never looked back.

So when she became engaged, Anisha took her trembling fiancé down to Louisiana to meet THE FAMILY. To say she had a large, protective clan would be putting it mildly. And as they stood in the middle of a sprawling southern lawn amidst a sea of people ringed by cypress trees, a little girl with blonde pigtails and big blue eyes came flying into her arms, calling her “Auntie!” Her fiancé turned to her slightly confused and said: “Anisha, you have one big family, but who are all these white people?” She smiled and said to him, “They’re all my family.”

A rich culture can take a big pot to hold the many flavors the world brings to it. You won’t want the dish below without a classic mix of Cajun spices or missing onions or finding no tomatoes. When everybody sets the table, the meal becomes a community. When each ingredient is savored and honored, the dish becomes a blessing. When we expand our concepts of family, grace is global.

Continuing to stir that pot, my Red Beans and Dirty Rice is a little to one side of classic—meaning no andouille sausage or ham bone in the beans and no chicken livers in the dirty rice. It’s vegan…with an option for fish near the end, since Lent is here, after all. Does this mean you couldn’t add meat? Of course not! I’ll let you know when, d’accord?

Just a few more pointers before we start:

Ever wonder how red beans and rice became so popular in the South? According to the website New Orleans Restaurants, the tradition can be traced directly to smart, well-organized women. Well wouldn’t you know. Seems Mondays were wash days at the turn of the century in New Orleans, and housewives needed a dinner that could basically cook itself—yep, those put-them-on-the-stove-and-forget-them red kidney beans.  “After soaking and draining them, housewives simply set the beans on the stove with fresh water to boil until tender, and then added a delicious helping of sautéed ‘trinity’–the quintessential Cajun/Creole cooking base of diced onions, celery and bell peppers. From here, it’s traditional to throw in Sunday dinner’s ham bone, letting it flavor the beans along with a bay leaf.”

Okay, so we aren’t doing exactly that, but we’ll be close. The method below approaches this dish sort of “in reverse,” cooking the beans and ladling them into a big skillet of those aromatics instead of adding the veggies and other ingredients to the big pot of beans. This is a method I picked up from Annie Somerville of the famous Greens Restaurant in California–she’s amazing and so are her beans. Why tamper with perfection, was my thinking.

Another switch is the beans themselves. Kidney beans are fine, and feel free to use them, if you wish, but I prefer Adzuki, a high-protein red bean of East Asian origin that tends to keep a better texture and flavor than kidney beans when the cooking is low and slow, in my opinion. And this is VERY low and slow. Plan for the day. 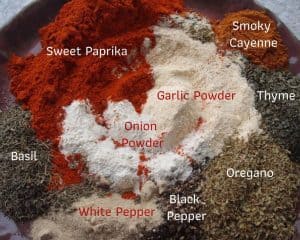 About the Cajun spice mix: mix your own. Yeah, I know: gotta buy all the spices, gotta look for the best you can buy (I suggest Penzey’s, if there is no local fresh source.), gotta blend it all together. Why not just buy a premade mix? In a word: control. Example: my garlic powder is fresh-made at Daydream Farm just a county over from where I live—huge flavor, no added salt, quite strong. My cayenne was a gift from my friend Sally—smoky with way more heat than one would expect from cayenne, and I LOVE it. So my classic Cajun spice mix tastes like MY Cajun spice mix. And yours should taste like yours. This “signature” touch is at the heart of those Mondays in New Orleans—each woman weaving her magic aromas and flavors and family secrets into her pot. Go the distance here. Make up a bunch, store the extra in a screw-top jar to use later—to sprinkle in your morning eggs, on your avocado at lunch and over your chicken at supper. Don used it as a rub on flank steak. See?

Finally, about that dirty rice…no pureed chicken livers here. Quite the departure from the traditional Cajun recipes. The “meat” in this dish is mushroom meat—YUM! And, yes, in case you were wondering, I am making my rice with Cahokia long-grain brown rice, using my favorite method of toasting and chilling it down. So if you want to make this rice a day ahead, you can. Just a thought. And note: I’ve used my friend Leo’s dried shitakes, soaking them overnight and using the delicious stock that develops to flavor my rice—so plan ahead for that.

Now…Put on that big pot of beans and laissez les bons temps rouler!

I know what you’re thinking: This dish will take all day. And, you’re right, if you look at it in total. But if the women of New Orleans could do it, AND do all that laundry BY HAND or RINGER WASHER, I’m pretty sure we can do it, too. There’s so much flavor here, so many options for every diner, and so many leftover possibilities. It’s really a time-saver and crowd-pleaser. Bien Sur!