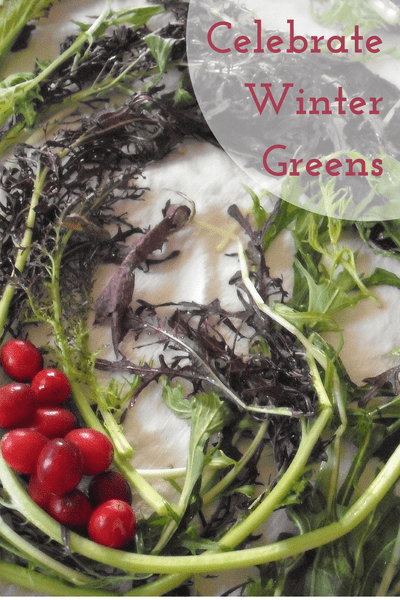 Sometimes life is really ironic. Oh, you knew that. Well it couldn’t be more true than in January, when the world decides to shape up, cut down, turn over and make that “see it through” commitment to be more healthy. Tops on the transition list to the new “us” is diet. We vow to eat less sugar and more vegetables. The trouble is that most of our fresh vegetables won’t be available locally until sometime in April, if you live in my neck of the woods, anyway. And while you can get just about anything any time of year in the big grocery stores, there’s not much favor going on—even in organic varieties (And let’s not even discuss carbon footprint due to transport.).

Not true of winter greens—the sturdy kales and collards, stored cabbage, Swiss chards and turnip greens, Brussel sprouts and even varieties of spinach all make an excellent fresh bed for other winter fruits and veggies. They may not come from right down the street, but they’ll be fresher than much of the stuff grown across the country (or beyond) or out-of-season greenhouse fair. And here’s the bonus: they are super-high in vitamins and antioxidants but very low in calories. So let’s celebrate winter greens with a salad that you can serve just about any time, with slight variations in some of the ingredients. For now, let’s take advantage of citrus, pomegranates and fennel.

For this recipe, I wanted to create a special salad dressing because unlike their delicate cousins–Romaine, field greens and leaf lettuce—winter’s hardy greens work better when you marinate them a bit. I drew inspiration from one of my favorite vegetarian chefs Annie Somerville of the famous Greens Restaurant in San Francisco. Over the years, Somerville taught me a very important lesson: even in a home kitchen you can create your own ingredients for pantry and freezer without a lot of fuss that taste way better than the processed stuff you buy in the store, especially when you take advantage of what’s in season. Which is why my dressing actually began back last September, when a big bunch of lemongrass found its way to me during a CSA dinner (Right now fresh lemongrass is probably only available in high-end grocery stores or from local greenhouses at a pretty penny, so this might be a tuck-away recipe for the coming spring, but we will explore a makeshift way around that below.).

Lemongrass is a beautiful herb with an earthy, almost lemon verbena flavor. It is commonly used in Tai and Indian dishes, many times with fish. It is very different in flavor from just using lemons, so be aware of that. But I’ve always been stumped on how to use it up. Most recipes call for only a stalk, maybe two, because it is very potent if you prepare it properly, as in this excellent demo from Melissa Clark of the New York Times Food Section.

In September, my bunch of lemongrass contained 10-12 stalks. So I started digging for more ways to use this exotic herb and stumbled on Somerville’s Lemongrass Stock, something she makes up for the curries she serves at her restaurant. What caught my eye was the word “freezable.” So I cooked up two quarts (double the recipe) of the stuff and froze most of it for cooking all winter long. Which brings me back to the dressing: I thawed one of my containers of stock for the dressing’s base. So, hunt up that lemongrass, if you can, and see the end of the post for Somerville’s delicious and versatile stock.

Serving Size: about a cup to cup and a half 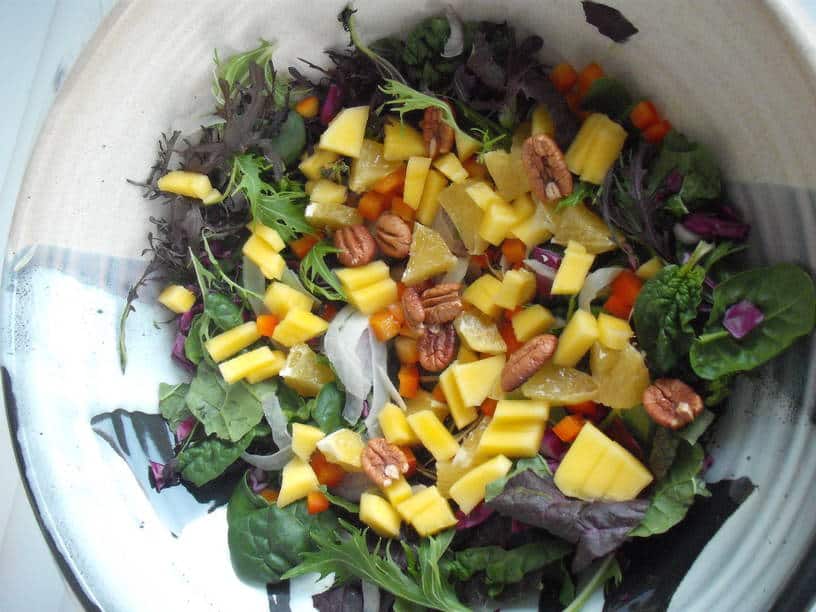 To Make the Dressing
To Assemble the Salad

Prep time refers to the time it will take to make the dressing and cut up and prepare the ingredients, including toasting spices and nuts. You’ll still need time for creating the initial lemongrass stock and time for letting the dressing ingredients marry in the frig.

Cook time refers to the time it will take to marinate the greens and then toss the salad before taking it to the table.

If lemongrass is unavailable, your next best option is lemon juice and perhaps a good pinch of the best herbs de Provence mixture you can find, which contains lavender and will impart that herbal quality.

At dinner, this salad makes a great starter for my Blonde on Blonde Pasta or an excellent main course at lunch. Pair it with a crisp Prosecco and some crusty bread.

Place the ingredients in a medium size saucepan. Bring to a boil, reduce heat and simmer, uncovered, for 40 minutes. Pour the stock through a strainer, pressing as much liquid as possible from the vegetables; then, discard them. Makes about one quart.

I froze my stock in one-cup freezer containers, and it thawed out just fine for my dressing.

So… what did I do with the other half cup of stock that I didn’t use in my dressing? I added another cup to it and created a lemongrass simple syrup (combining the stock with one and a half cups sugar and cooking that down until the sugar dissolved and the mixture thickened to coat the back of a spoon.) The syrup became the foundation for my signature party drink of the season: a Desert Deb, in honor of my friend Deb’s birthday.

To make a Dessert Deb: In a short cocktail glass, put four or five tablespoons of lemongrass simple syrup, a half shot of Amaretto and a full shot of silver tequila; stir well and add ice. Now top that off with a little sparkling water (maybe half a cup) and stir to chill well and combine. Happy New Year!