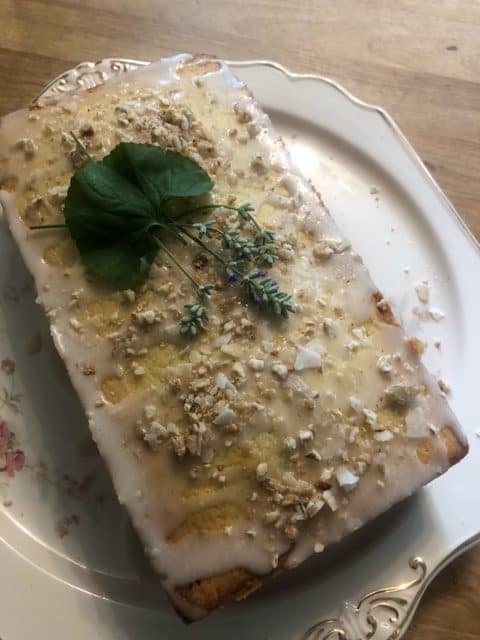 If I am given my choice for dessert, I usually choose something creamy like ice cream or pudding with a short cookie or crust. A refrigerated cream pie is divine! Crème Brulee with shortbread pure heaven! I like cake, of course, but it’s never my first choice; my grandma favored pies and cobblers with incredibly short flaky crusts, so perhaps that is where my preferences began. But put a slice of real pound-of-butter pound cake in front of me…particularly lemon pound cake that has been chilled in the fridge…well, if I must.

Which brings me to the pound cake at hand—very different from my Strawberry Lemonade pound cake in 2019. This “old fashioned” version is made in loaf pans, the way my grandma would have made it. She liked to slice it, top it with fresh fruit and maybe whipped cream, or, better yet, have it next day toasted for breakfast. Yum!

Other from-the-past factors in this recipe are the use of one full pound of butter, from which the cake originally derived its name. It must be whipped super light, and the eggs must be separated, the whites beaten to stiff peaks. (And you will find it very handy to have your portable electric mixer and a clean deep glass bowl at the ready to beat the egg whites. Stopping to wash beaters and bowls is a nuisance to avoid, if possible.) What you won’t find here is leavening—no baking powder or soda. You are going to create the texture of this cake with double-sifted cake flour, those billowy eggs whites and the fluffy satiny butter. Be brave!

And about the herbs…totally my addition. Grandma assumed lavender was for talcum powder and rosemary was for chicken.

To Make the Cake

The time for prep and bake does not include getting ingredients to room temperature. I find that takes about three hours. So plan ahead.

This dense cake keeps for at least a week carefully protected in your refrigerator. It actually gets better as it mellows. Cold pound cake is a real summertime treat, in my opinion. And another plus, it freezes like a dream. You do get two cakes, after all, so well worth the effort involved. 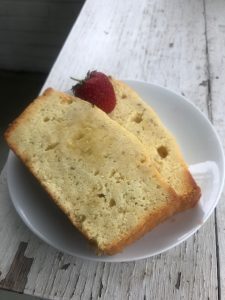 While pound cake might seem like a heavy dessert for warm weather, this old-time version is my idea of summer yum. The best part I think is that you can serve this many ways. If you choose not to glaze one of the cakes, I strongly urge you to try a slice toasted for breakfast with fruit and yogurt. The cake is dense and sturdy enough to work in the toaster. If the weather is super warm, refrigerate it and serve it cold with sherbet or ice cream…and maybe a drizzle of chocolate sauce or market strawberry jam. Gosh I’m hungry. How about you?