Pop’s Pies: How to Bake a Memory…and Start a Business 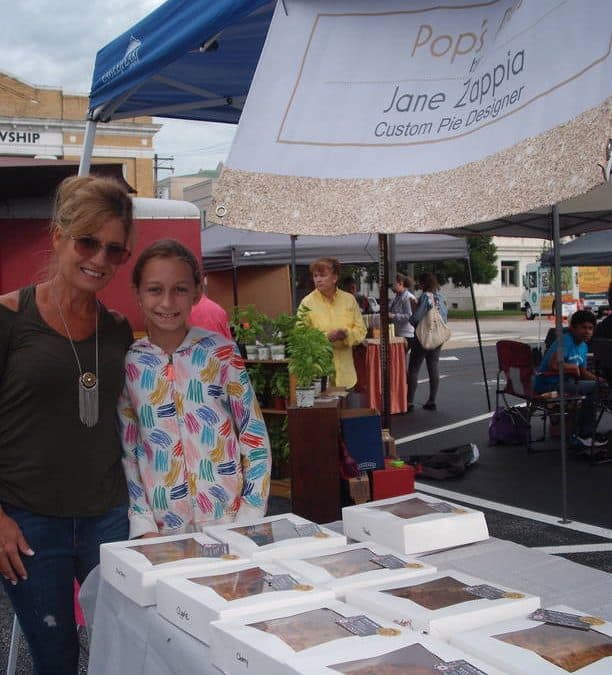 Well there’s a new vendor at the Goshen Community Market, who just happens to be an old friend…. Jane Zappia, of past Green Gal Keto fame, is the owner and proprietor of Pop’s Pies. She’s at the Market with her daughter Hayley this coming October—which is, like, tomorrow. Time flies. (Remember Hayley—the Cocomels Spokesmodel?)

Ok, so pies are a pretty standard farmer’s market item; every market has at least one bakery stand. But I bet you’ve never seen or tasted a pie quiet like Jane’s. (And let’s be clear here, this is coming from a green gal who can whip up a pretty mean pie, herself, so keep that in mind.)

Jane’s creations are over-the-top beautiful and indescribably scrumptious (Although Don has volunteered to taste every flavor and write a comprehensive review.). Her variety astounds me—everything from berry latticework pies, to meaty potpies, to rich buttery pecan and decadent chocolate custard and banana cream. And you, Green Gal reader and Goshen Community Market shopper, are in luck because Jane is selling her best fruit pies in October at the Goshen Community Market; then, she’ll be a regular at the all-popular Winter Market this year!

Here is what I think makes this such a sweet deal—the holidays are coming, (Oh, I know.) and you know how I’m always harping on avoiding all the big-box stores and stressed out shopping in favor of buying local, homemade gifts of love. Bingo—buy a pie—it already comes decorated in its own box, for goodness sake! 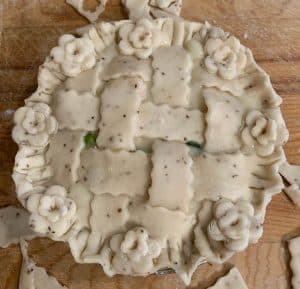 And when I say these pies are made with love, it’s not a jingle or a cliché because there’s a sweet story here…and you knew this was coming, right? Well, pull up a fork, and we’ll dig in. I mean, you gotta wonder how a sold-on-keto baker ever became the mastermind behind Pop’s Pies, don’t you?

When Jane married her husband Nick, like every married person, she got his family in the bargain. And Jane being Jane, adopted them right into her heart. Nick’s dad, whom he called “Pop”, was alone and needed a bit of TLC. So at least once a week, Jane made sure Nick’s dad Tony had a good hearty meal from her kitchen. And the tradition became “making Pop’s plate”.

So when Tony passed away, he left some holes in their hearts and their routines. “For the longest time,” Jane recalled, “I would catch myself starting to make Pop’s plate, except there was no longer a reason to do so. It made me so sad, and I started trying to find a way to turn that around.”

To fill the void, Jane began baking and cooking for people she knew, especially those who needed that extra bit of help to get along—just as Tony had. She’d been cooking in her mom’s kitchen since she was in grade school and is known as an accomplished talent in the kitchen. She’s done her share of charity work, too, providing her amazing pies for fundraisers at Hayley’s school and for other nonprofits.

Jane also brought her pies and treats to work regularly, and her coworkers looked forward to her savory and sweet treats that served as breakfast, lunch, and dinner. One day a coworker, who also happens to be a life-long friend of Jane’s, suggested she should start selling her pies. This was around Christmas time so it seemed like a great idea! Selling pies was something simple to share for the holidays.

Jane certainly had the experience in the kitchen, the desire to help others, and now, she had that hole in her heart to fill. And her coworker’s suggestion just wouldn’t leave her. She started thinking about transitioning out of grief and turning her weekly ritual of making “Pop’s plate” into something positive, something even profitable and fun and community oriented. That’s when she decided to start Pop’s Pies.  The rest is history…since Christmas 2018, Jane hasn’t stopped making pies, while exploring new flavors and designs.

Remember how we said transitions are hard? Well, they are, but they can also be beautiful, if your heart is in the right place and your butter is chilled and your filling is cooked to perfection.

How Can You Get Your Pop’s Pie for Holidays?

As I said, Jane will be a regular at the Goshen Winter Market beginning in November. She’ll have a selection of fruit and meat pies, as the demand dictates. You can always order ahead from her website, and for a small fee she’ll deliver, as long as you are somewhere in the area, which is great if you can’t make Winter Market Saturdays. Further, you can place special orders for items that won’t be available at the market, as well.

What Are the Green Gal Holiday Picks? 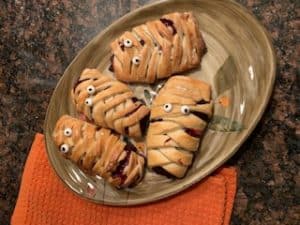 Let’s start with some Mummy Hand Pies, why don’t we? Aren’t they adorable? This is my pick for October, though some folks will want to dive right into traditional pumpkin or chocolate pies. (Note that pumpkin pies and cream pies are special order only and pickup would be outside of market. So order from the website if you are in the mood for these.) But in my opinion, especially if you are giving a Halloween party this year, you need some of these little mummies on the dessert table. No tricks…all treat. 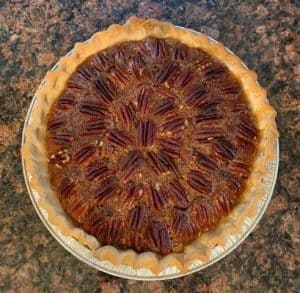 I just know your Thanksgiving is like mine—BUSY, with way too much food to prepare in your own little kitchen. So don’t stress; order a pecan or cinnamon swirl pie from Jane! And sure, I know this is one of the big holidays—right up there with Christmas–when you want everything tasty and trimmed to perfection. Well, these pies will be, all wholesome ingredients and from-scratch designer crusts and generous fillings. Just put them on the table and sit back and listen. Hear that… Ahhhhhh, Ooooooo, “I’ll have another piece.” Be warned, you will hear this, so for a large gathering I suggest you buy two. 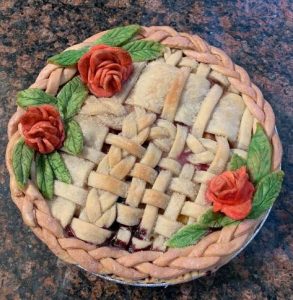 And if Thanksgiving is BUSY, Christmas is…well…Christmas. Again, you can’t go wrong with a Pop’s Pie. And just look at the decoration! This handsome berry pie can be your dessert or a one-of-a-kind gift for someone else. What hostess wouldn’t love this? You can bet she won’t get another one like it.

Not that I want to hurry the holidays along, but I just had to throw in this romantic Valentine Pie. It’s so cute! Scrap the box of chocolates, leave the roses in the store and give home-baked love instead. Sweets for your Sweetie never tasted so good. Think about this: your Sweetie will have the pie, and you can eat it, too. The beginnings of a beautiful relationship. 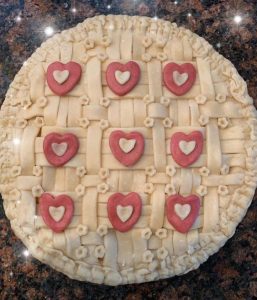 Guess you can tell, my admiration for my friend Jane and her culinary talent is pretty huge. We’ve spent hours talking food, sharing recipes, extolling the benefits of real-food cooking, and commiserating over our love of puttering in the kitchen when others are glued to computer screens. And now she has taken this huge, brave step to start a small business. So like her on Facebook, put in your orders and shop the Goshen Market!

You might even see Jane out at Rolling Lawns Farm’s Milk House in the near future teaching a class on—yeah, you guessed it—making, decorating and baking pies. I am so proud of her I could just bust…but I’ll probably still have room for another piece of pie. You too? 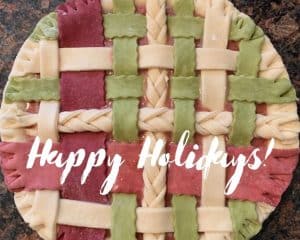