When I was in college, studying T.S. Eliot, Virginia Woolf, Chaucer and Shakespeare, I was lucky to have several creative and brilliant classmates who became friends. They filled my life with all kinds of wonderful ideas and values that stretched far beyond the classic literature in which we were all immersed. One such friend was Glen Steinberg, who now is a professor of English at the College of New Jersey. Glen and I shared a love of poetry and prose—though not always exactly the same authors and works. We had a lot in common, but (thankfully) we had our differences, which is why he taught me so much.

For one thing, I was raised barely Christian/mostly secular/almost pagan. Glen was and still is a Roman Catholic. We were always going back and forth about dogma, philosophy, gender rights, the meaning of ritual, patriarchy, etc. I’d be in my typical feminist rant and Glen patiently (maybe sometimes patronizingly) would stare at me through lowered eyelids. But we never actually “fought” about anything that I can remember. So that gave us the opportunity to learn, even if we disagreed.

One of the most important lessons I learned from Glen, he probably wouldn’t even remember. A few years past grad school, when he was at Indiana University in the middle of his doctoral program, we had a conversation about Lent. I asked him if he was watching one of our favorite TV shows—“Thirty Something” (Yes, I’m dating myself here.). He said he’d given it up for Lent. “What good is that going to do anybody?” I retorted. “Are you planning to save the world with that before Easter and then catch up on reruns over the summer?” Yeah, I could be kinda snarky.

His eyelids lowered. “While the show is on,” he said, patient and patronizing, “I’m studying the Bible. I want to understand it better.” A day later a little lightbulb went on in my head, which Glen knew would happen, I’m sure. Maybe Lent wasn’t as superficial as I had imagined—people giving up chocolate, coffee, whatever, only to binge like hell come Easter morning. Maybe it wasn’t so much about what you gave up but more about what you put in its place? Maybe the point of Lent was to let go of something in order to make space for something better… something more profound and meaningful that wasn’t going to end on Easter but was going to stay with you, changing you for the better, making you more aware, more giving, more kind? Maybe sacrifice was really a willingness to receive? It was one of the Dr. Seuss moments, I guess: “Toni Hears a Who.”

I did nothing more about this idea for years, but clearly it stayed with me. Then I came up against an ongoing situation in my professional life that was turning me into a person I really didn’t like—angry all the time, quick to judge, full of worry and needing to control everything for fear I would lose power over projects. I was miserable. So, when Lent rolled around in March 2005, I gave something up to the Universe—Anger. I let go of anger and vowed to replace the feeling—every time it came up—with joy.

Ok. Of course I still get angry. Just check my Facebook page for the latest comment about Monsanto. But to this day, I still work on keeping anger out of my life. I am still aware of its ingress and my own power to oust it. (Glen would be so proud.) The next year, I gave up judgement, deciding that my life would be more peaceful if I stopped judging others and myself. When I heard a little voice in my head or in my part of a conversation start to sound mean and critical, I’d try my best to just shut it up (If you know me, have been in a meeting with me when I get opinionated, you know how high I was setting the bar.). And as Lent has rolled around each year since, I’ve let go of something I’d rather not be contributing to the world and have begun working on replacing it with a better idea, thought or action.

So in the spirit of making Lent more positive than negative, less about deprivation and more about celebration, I (who am closer to Druid than Saint, but not a lost soul) would like to offer this original recipe for those who are not eating meat on Fridays or during the entire season of Lent 2016. This dish can even be vegan, if you leave out the goat cheese. So put some faith in wholesome, organic food and let go of deprivation. 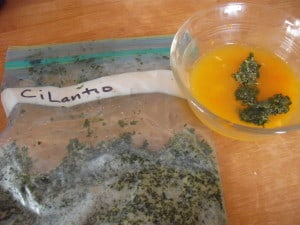 I used my frozen cilantro from the fall and it worked just fine.

This salad is very pretty and large—great for a party. And, don’t forget that quinoa is a complete protein. Even though this dish is vegetarian and gluten-free, it will probably never occur to you that you are giving something up.