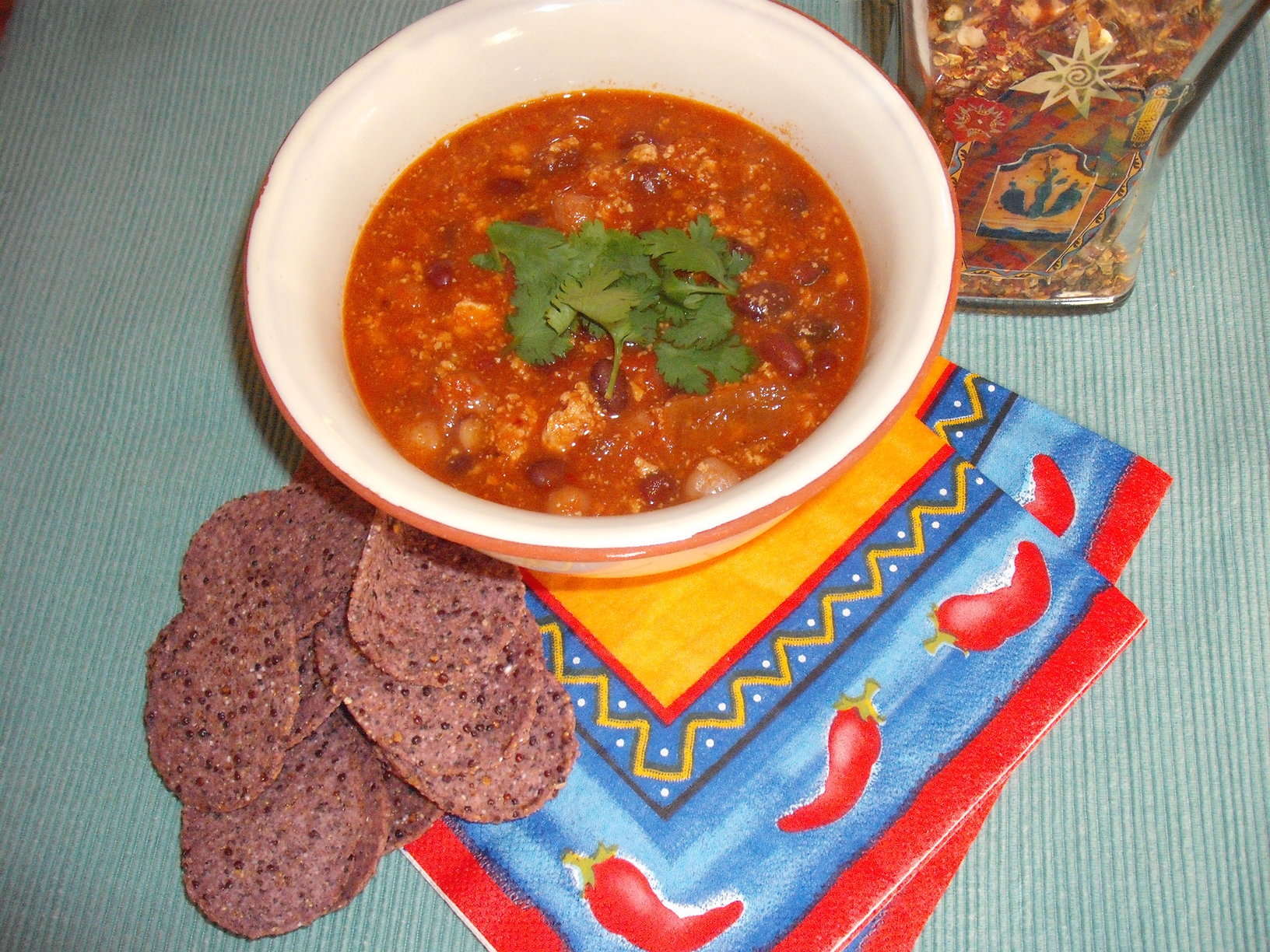 A few years ago, on one of her many trips to New Mexico, my friend Deb brought back a pouch of absolute magic—a home-grown, hand-harvested blend of chilies and spices that she purchased from a sweet little man by the side of the road in Taos, NM at the edge of the Rio Grande Gorge Bridge. He is, in no uncertain terms, the “real deal.” He calls his concoction “Salsa Brava,” a common name for Mexican restaurants in the Southwest, as well as for dishes of Mexican origin (and, perhaps, wannabes). But I would bet there’s nothing quite like this mix—at least nothing I’ve found. 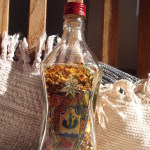 Both Deb and I fell under the spell of this spice mixture and began adding it to anything southwest that we whipped up in the kitchen. Soon it was gone. So on her next trip, she headed straight for the bridge, only to find that the sweet little man was already packing up his things and was completely out of spice. Panic ensued.

Seeing the hysterical gringa begin a major meltdown before his eyes, he cut a deal. If she could come back by his home at the end of her two-week trip, he’d have her Salsa Brava. Reprieve. Deb was then on the road to Albuquerque, and he was headed back to the ranch to work his alchemy. (Actually, it’s his wife who is the spice shaman; he’s the sales team.)

Two weeks to the day, she met him for the appointed rendezvous and followed him home, where assorted chilies hung on ladders drying in the sun outside his adobe home. She bought several bags of the magic red powder and headed for Illinois. Her car was awash with cumin, chipotle, habanero, Steppenwolf and goodness knows what else (The ingredient list for the spice mix has never been included with the purchase, alas.).

For the next year, we used the spice with abandon. A little goes a long way, so we weren’t really worried about running out. Deb would be returning to New Mexico within the next year… except she didn’t because life, as it sometimes does, took a turn. Supplies grew short. Rationing began. Panic returned.

Finally, with only a quarter of a jar left in my kitchen, Deb headed southwest again to meet up with the spice magician… except he wasn’t there. His brother was at the Gorge, though not selling spices, and informed her that the “spice man” was on vacation (who knew???) and wouldn’t be at the Gorge at all during her trip. She came home emptyhanded.

Finally, a few weeks ago, I sent back the beautifully decorated spice bottle that she’d made when she first gave me my spice. The bottle was empty, and I couldn’t bear to look at it. Deb tucked the bottle away in her kitchen, and we both began to worry over how we’d ever make certain dishes without the magic spice.

The next day, the real magic began: a package arrived from Deb’s friend in New Mexico with a note that read: “We took some folks over to Taos last week for shopping, but we stopped off at the Gorge so they could get a taste of what the local artisans really make and sell on their own. You’ll never guess who I met—that little man you kept telling us about. To be honest, I didn’t think he really existed, but there he was. Thought you might like this….”

“This” was a huge bag of the magic spice. Not kidding, this is really how it happened. My beautiful bottle came right back, stuffed to the top.

For a moment I just didn’t know what to do. Then it hit me: make chili. So I did—my famous Tofu Chili that even my meat-eater husband can’t get enough of. Here’s the recipe—with ideas for how to make it if you didn’t get your magic spice bag from the Rio Grande Gorge this year. 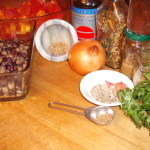 This recipe capitalizes on from-scratch ingredients. 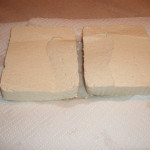 This extra step in preparing the tofu will keep it at a nice texture, resembling ground meat.

To prepare the tofu, remove it from the package, and slice in half across the brick. Place the two halves between paper towels and weight with a cast iron skillet or heavy casserole dish. You want to make sure you drain all the water from the tofu. (Takes about 20 minutes.) 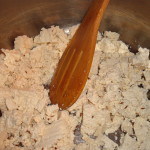 The tofu will crumble up to look like ground meat. Be careful not to let it stick.

Heat the peanut oil in a large Dutch oven with the whole cumin seeds. When the cumin becomes aromatic, add the tofu by crumbling it into the pan. Stir often because the tofu will stick. A little sticking is probably unavoidable.

Once all the tofu is in the pot and simmering, add the Tamari, the ground cumin, the ground coriander, the ground oregano, the onion, garlic and a light sprinkle of sea salt. Sauté for four minutes. Add the bell peppers and continue to cook for a few minutes more. Tofu will adopt any flavors you put with it, so this step, in essence, seasons your tofu. 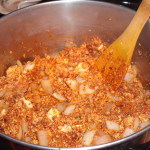 Frequent stirring is essential at this stage.

Add the stock or water, beans and tomatoes, breaking the tomatoes up as the chili cooks. Bring to a boil, reduce heat and simmer covered for about one and half hours. (I’ve also transferred the chili to my slow cooker at this point and let it slow cook on low all day. Ends up very nice and the house smells great.)

Before serving, add the cider vinegar and the cilantro. Taste-test for salt and pepper. Stir and heat for a few minutes longer. 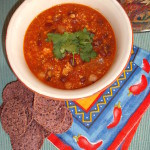 We took our slow cooker full of chili to a birthday party and served it with gluten-free blue quinoa and corn chips.

Like most one-pot dishes, you can play around with your ingredients and come up with a chili that is just what you want. What is your best chili recipe? Do you have a special magic ingredient you can’t live without?

Confused about which brands to use in your recipe? It can be a challenge. I really like the Environmental Working Group  “food score” section on its website that really helps you navigate marketing hype.