The Politics of the Pumpkin Patch 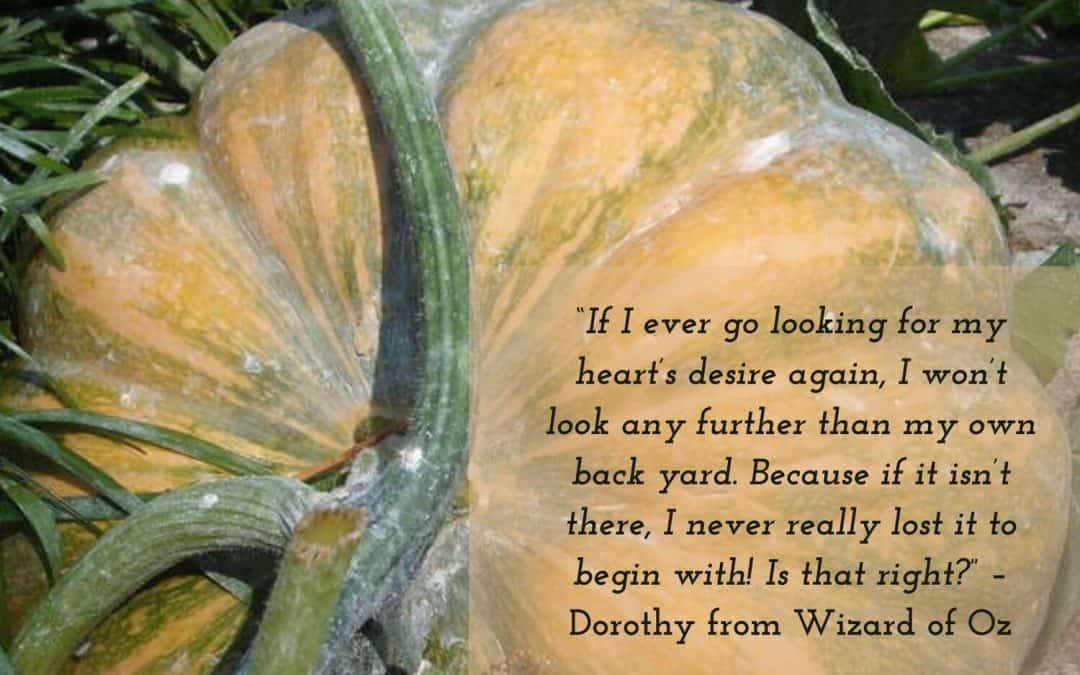 Last year I made the decision to start ripping up my front yard—eventually I mean to rip up all my yard. The plan is to give back some of my land to the Earth: remember last year’s post She Went Native Right in the Front Yard? With the help of local native plant expert Tom Shirrell and my daughter Heather, I took out several feet of typical, useless suburban turf and handed it over to cone flowers, foxglove, monarda, hyssop, yarrow and milkweed. A transformation from “doing something to the Earth” to “doing something for the Earth” had begun.

As of this Spring, I have a thriving, but discrete, compost pile behind the hydrangeas (which became a summer home to some volunteer squash in May) and a newly planted pumpkin patch from last year’s seeds—yep right there in the front yard. Intermingled in the pollinator plants, I also put in potatoes—just a few, along with baby raspberry bushes—thank you Sally Burgess and Susan McElroy for those little starts! There’s food for me, my family and friends, as well as flowers for pollinators and hummingbirds. Win win.

Okay, we get some looks. But let’s face it, we always have.

I began this transformation to help the planet, to combat climate change, to be a responsible environmental champion by example. While all these reasons still hold true, something else happened as last summer progressed: my plan went through a metamorphosis, and I have found myself on a personal journey to figure out not just how I can care for the Earth but more importantly how I am a permanent part of its living system—in this bodily form and beyond. How trees breathe when I breathe. How water that flows in a river, flows in me, too. How wind and weather change me as well as the landscape (Ever had a sinus headache before it rains?). But this consciousness of Earth and my conscious connection to it have, up to now, been distant… perhaps for years.

So I took a class last fall at La Vista Ecological Learning Center called “Connecting to Earth” (Why mess around?). I have been reading a lot of books—The Overstory by Richard Powers, The World Without Us by Alan Weisman, Wilderness and the American Mind by Roderick Nash, plus a few more. I tried (still trying) to meditate. I continue to take long walks in the woods. But it was digging in that pumpkin patch, breaking my back shifting dry, hard clumps of dirt and matted grass and weeds to reach a fertile floor that made me finally begin to feel the connections—more connections than I ever imagined and realize just how much farther I’d need to go.

Rooted in the Past

It took hours and an ocean of sweat to force that corner of the yard to let go of its invasive past. The roots and weeds were so firmly established and interwoven, it was a lot like ripping apart medieval chainmail and nearly impossible to see that it wasn’t always like this…before human civilization made a lawn a thing of beauty.

Until this journey, for instance, I had never thought about my yard’s ability to suck up gallons of precious water in order to feed nothing but its voracious self and overrun whatever got in its way—even if what had been there before was more valuable in the larger scheme of things: The yard had staked its claim, created social acceptance for its behavior and its greed; it had just always been there. It was supposed to rule. And now, trying to remove it would be painful. 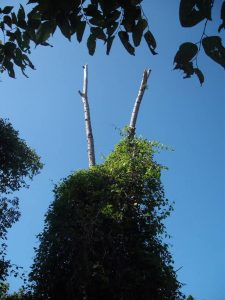 A few weeks into this pumpkin patch project, I was out running early to avoid the high heat of summer. We’d had a lot of rain, and everything was thick, fungal, tall and loud with life. I was on a familiar neighborhood trail—one I’ve run for the past 20 years–when I passed a dead white tree—one of those alabaster maidens in the woods on which vines drape garments of green and blue in June until the autumn fashions arrive all gold and red. It’s two top limbs rose toward the sky in a massive V, and I distinctly saw the message of peace, the hand signal that speaks of trust, communion and goodwill with a silent single gesture. I saw it so clearly, I heard it wish me peace. I held up my hand with the two-finger V in answer.

Now I must have passed this old dead tree a million times—running, walking, biking—in those 20 odd years. Suddenly I heard it and connected.

I know what you are thinking: Toni is back on the wacky tobaccy and is so Bogarting that joint. Well, that’s okay. I get it. Because this is my journey, my reach toward something large and fairly unsubstantial in human terms. My quest to find my way back home—for what home means to me. We all have our own journeys to travel and our own reasons to go on. As long as we cause no harm, we are validated, I think.

And when we do cause harm, as long as we are courageous and clear and willing to change in order to right the wrong, we should continue onward so we can bring new truth and light to half-told stories and fear-fraught lies, giving our histories not less but more integrity, more understanding, more value for learning from the past and making way for a better future.

Meanwhile Back at the Pumpkin Patch

Oh yeah, we were ripping up sod and planting pumpkins. . .  it’s so easy to get distracted when the work is hard, when the tasks are repetitive but necessary, when you’d much rather be reading a book and sipping a cold drink, pretending your own yard was not part of the problem. But in the heat of the day, pitchfork in hand, I continued dismantling the old growth and disrupting an outdated, costly and harmful front-yard mindset in order to keep reconnecting.

I lugged wheelbarrows full of topsoil and mulch. I brought around and worked in last winter’s compost from the backyard. I turned dirt, ripped more turf. Repeated it all until I had this modest little patch of healthy Earth. Why did I imagine it would be so much bigger? Why was it taking so long? 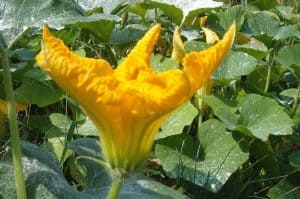 It seems I was not the only one trying to connect with the Earth through my pumpkin patch. But this was part of the original plan, right? Something for us, something for others—faith sown in a belief in abundance. I have this feeling the deer, and maybe a few rabbits, were convinced I’d done this all for them. They did seem grateful, so I just kept on keeping on.

It’s Autumn now. My one big pumpkin (yep just one) was harvested a few days ago—not from my well-tended plot because all those blossoms and a few baby squash became critter food—but from the compost pile behind the hydrangeas, where it took absolutely no work or sweat or struggle to produce a beautiful fairytale pumpkin. So how should I feel about that?

I could be resentful, I suppose. I could feel thwarted by the very Nature I set out to serve…tried to come home to. I could feel just like Dorothy might have when the good witch Glenda tells her she’s always had the power to go home—after a harrowing escape from the wicked witch of the west and creepy flying monkeys. Yep, easy as clicking those heels together three times (or tossing those seeds out the front door). In another time in my life, if I had been Dorothy, I’d a decked her. But now, this far on the journey, I think I get it. Dorothy got it—she had to learn it for herself. And what have we learned, Dorothy? 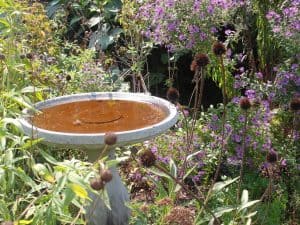 Eventually, my pollinator garden started to change, prairie asters replaced foxglove and monarda. Yarrow and hyssop turned brown and brittle. My cone flowers looked more like Halloween decorations than that glorious explosion of color and contrast that had appeared by July. I was ready to cut it all down and be done for the year because it seemed to me it was becoming ugly. 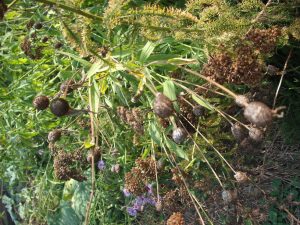 My daughter and my friend Max managed to change my mind before I could reach for the clippers. Heather—the professional in all this leafy stuff—explained to me that just because these plants looked different from my expectations of acceptable, they were every bit as valuable to Nature. Those spikey brown centers on the petal-less cone flowers are seeds that feed the birds, who then poop them out somewhere else to make more cone flowers, if conditions are right. 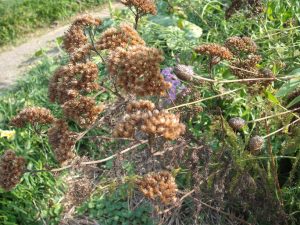 So we left everything, allowing everything to be itself and speak its own truth…soon enough the frost will come, and the energy will relocate again. And then, says Max, it will be time to feed the compost so that the cycle can continue.

The Earth, it seems to me, has it all figured out, but somewhere along the way, we humans may have lost sight and sound of most—if not all—of what keeps us connected to the miraculous system that gives us life. And in so doing, we seem to have lost sight of how we are connected to each other, too—a loss so overgrown, matted and entrenched in power, greed and narrow versions of beauty that we can’t imagine our lives any other way…or worse, no longer see ourselves clearly, no longer recognize or question greed, arrogance or cruelty toward each other and this planet–so rooted in what seems to have always been that we have forgotten what truly matters…that we are all a part of this Earth and, if we truly want it, we have always had the power to go home. 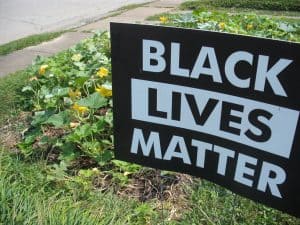 Yeah we get some looks.

And in case you were hoping for seasonal recipes to accompany seasonal thoughts, here are a few Green Gal pumpkin favorites: Pumpkin Pudding Squares—Gluten free!, Fairy Tale Pumpkin Cheesecake, Pistachio-Encrusted Pumpkin Wedges, Pumpkin Pie Snickerdoodles, Pumpkin Gratin and my Grandma’s best Pumpkin Pie. And if you keep digging…there are more pumpkin recipes to be found on this site!